As the largest Muslim country and the third biggest democracy in the world, Indonesia is among the salient actors to intervene in global developments. However, the socio-political reality in Indonesia tells another story. 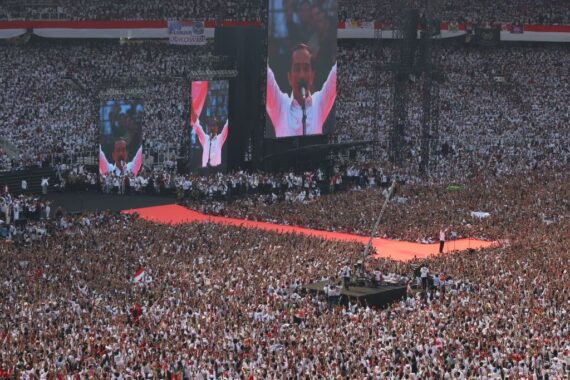 The President who is also a candidate for the Republic of Indonesia president Joko Widodo gave a political speech related to the Indonesian presidential candidate's campaign for the period 2019-2024 at the Bung Karno Stadium, Jakarta, April 13 2019. Getty Images

Presidential and parliamentary elections were held in Indonesia on April 17. If the geographical scope of this Archipelagic country is taken into consideration, the fact that these elections were carried out in a single day is quite noteworthy.

According to an unofficial quick count system, Joko Widodo, the incumbent president, gained the majority of votes. If the processes in the past elections are anything to go by, it can be accepted that the current results will not change and that the winner will be announced on May 22.

As the largest Muslim country and the third biggest democracy in the world, one can imagine that Indonesia is among the salient actors to intervene in global developments – in particular those affecting Muslim communities in distinct geographies from the Middle East to the Asia-Pacific region. However, the socio-political reality in Indonesia does not allow one to easily reach this simple conclusion.

Islam is the prominent religion in Indonesia so that ruling parties and political leaders feel obliged to approach  religious groups in order to gain power and legitimacy.

There is no doubt that Islam being the prominent religion in Indonesia, ruling parties and political leaders feel obliged to approach various religious groups and individuals in order to gain power and legitimacy through establishing various alignments with relevant social segments. This process is also, to some extent, observed in the legislation processes and the implementation of various policies.

On the other hand, the multi-religious nature is also a factor that must be considered by the Indonesian government as there is no doubt that this creates a dilemma and constrains the government when deciding on how to prioritize on related policies.

Beyond this, one must remember that Indonesian nationalism emerging from Java Island is considered as another fundamental source for national politics. In this regard, politicians and political parties are forced to merge nationalist and Islamist perspectives in their discourse, as has been observed in the latest elections.

There are some important components that determine the direction of Indonesia’s foreign policy. Firstly, although twenty years has passed, it can be observed that reforms that were put in place after the fall of the Suharto regime is still continuing today.

Indonesia’s foreign affairs are still under the strong fundamentals established in pre-independence years, which had limited space for Islamic discourse and actions, especially in terms of international politics.

Indonesia’s foreign affairs are still under the strong fundamentals established in pre-independence years.

While national politics is dominated by actions designed to gain the upper hand in power struggles by political elites and distinct interest groups, foreign policy is yet to be developed on a primary level to deal with regional issues in the Asia-Pacific and global problems related to Muslim minorities, such as the Rohingya issue, Islamophobia, and the case of Palestine.

The reform era dealt with the re-modification of state institutions, curbing corruption practices from the provincial level to the ministerial stage, improving and upgrading infrastructures with effective policies, decreasing regional economic disparities and so on. This process has made central governments focus on national issues, rather than international ones.

In addition to the above-mentioned subjects, regional and global security problems related to subsequent terrorist attacks in various countries have been of primary concern for Indonesia. Given the realities emanating from kidnappings and killings in the islands of southern Philippines to terrorist organizations in the Middle East, these issues have been closely observed by national security agencies. Besides this, the Indonesian governments in recent decades have been alert to developments rooted in the Middle East and has taken various counter-measures against the effects of these activities from seeping into the country.

Representing mainly the nationalist world view, Indonesian governments, through various agencies such as the military, police and elected national parliament members, have been skeptical towards Middle Eastern politics, which is shaped by multiple conflicting parties.

Any unrestrained or misguided involvements in Middle Eastern politics or cases related to Muslim minorities in the Asia-Pacific region would perhaps cause unintended consequences among some circles in the country. Thus, Indonesia’s foreign policy is quite sensitive in this issue and has been considered as a matter of national security.

One can assert that Indonesia needs strong alignments in foreign affairs in order to act accordingly with any issues that Muslim communities face in both regional and global settings.

As observed in the case of the persecution and ethnic cleansing of Rohingya Muslims, just like other regional countries, Indonesia was not able to take any firm stand against Myanmar. This is not only related to the commitment of the non-interference principle in the ASEAN charter, but also due to the loose alliances among member countries, including Malaysia and Brunei, against these sorts of developments.

Overall, Indonesia’s political environment does not permit much room for the president and government to take a leading role in regional and international crises related to Muslim minorities.

In this regard, there appears to be a dichotomy of views, since the government and a significant segment of the public differ on their views on Muslim-related issues in the global setting.

Indonesia’s political environment does not permit much room for the president and government to take a leading role in regional and international crises related to Muslim minorities.

The above-mentioned issues, in particular those related to terrorism, are forcing the Indonesian government to redefine Islamic discourse in the country. It is also observed that political and religious elites have initiated a further understanding of domestic and traditional Islamic practice, which is known Islam Nusantara. Even during the Yudhoyono governments during 2004-2014, a similar principle appeared in the form of religious tolerance with prevailing democratic practices.

The initiation of the idea of this process undoubtedly occurred in the years after the bombings in 2001 and was put into practice after the expansion of Daesh. It seems that the triggering point for the Jakarta regime to prioritize a peaceful Islamic view was molded historically. While this policy aims to create confidence among the general public and international community, it prevents the government from participating more freely in international matters.

It is undeniable that some political parties seem to have a quite strong Islamic tendency, either from the traditional or modern perspective. And this may give a wrong impression to outsiders in the sense that these political parties have a strong influence upon the decision-making processes of the government towards molding foreign policy.

The religious tendency of political parties and the social makeup of the majority of the population does not mean that political Islam has the upper hand in national politics in Indonesia.

It should be noted that the religious tendency of political parties and the social makeup of the majority of the population does not mean that political Islam has the upper hand in national politics. On the other hand, major political parties seek the assistance of Muslim groups and use Islamic rhetoric to seek political legitimacy for their own purposes, which does not translate to a more active national or international role. It is quite practical and pragmatic to appropriate the Islamic stand for personal political gain and/or the betterment of a particular political party’s image in front of the general public.

This was quite significantly observable during the campaign process and the selection of the candidate for the deputy position in the presidential election on April 17. The campaign process contained significant Islamic discourses from both the coalition blocs of Jokowi and Prabowo; it mainly served to divert the relevant critics and attacks from either opposition side.

Though some religious groups argued that Jokowi is a secular person and criticized certain policies of his, Jokowi strategically picked up Amin Ma’ruf, a distinguished board member of the Nahdat’ul Ulama (NU) and former leader of the Indonesian Ulema Council (MUI) as his deputy. Some have argued that the new government would be actively and constructively involved in matters related to Muslim minorities due to the role that Jokowi’s deputy will play. However, the abovementioned facts are still substantially relevant. And it is expected for the new cabinet under Jokowi will divert from earlier mainstream policy.

Also Read
Man of Contradictions: Joko Widodo and the Struggle to Remake Indonesia