Beijing must consider that the strong Western response against Russia over Ukraine War can be used against it, should it make a move on Taiwan. 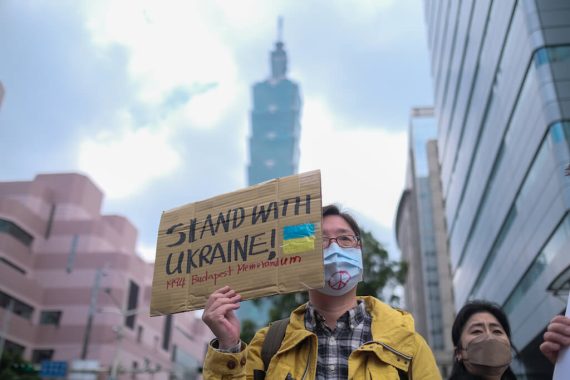 Just days before Russian forces invaded Ukraine on February 24, U.S. State Secretary Antony Blinken didn’t mention China by name, but warned, “Others are watching. Others are looking to all of us to see how we respond,” a warning echoed by three other senior U.S. officials who told Bloomberg News that Beijing is gauging U.S. response to Russian military aggression as a proxy for how the U.S. would deal with a Chinese military attack on Taiwan.

In their 5,300-word joint statement, delivered on the eve of the Beijing Winter Olympics, both Vladimir Putin and Xi Jinping made clear they share a common view of the international order, with both believing the “West is failing” and in “constant crisis,” and therefore presenting them with an opening to change the status quo.

Certainly, Russia’s invasion of Ukraine, and China’s threats and against Taiwan are underpinned by this logic. Putin gambled all that was needed to tear apart the fraying Atlantic alliance and European Union was a little shove, a view shared strangely enough by former U.S. President Donald Trump, who last week told a conservative audience “Putin is smart” and “NATO leaders are dumb.”

Retired Lt. Col. Alexander Vindman, a former National Security Council official during the Trump administration who testified at the former President’s impeachment inquiry, told ABC News on Monday, “It was Trump’s attacks on NATO and support from the far-right that encouraged Putin to believe that NATO was fragile,” reminding viewers his former boss also froze U.S. military assistance to Ukraine in order to solicit dirt on then presidential candidate Joe Biden.

Russian forces caught off guard by the bravery and tactics deployed by their Ukrainian counterparts.

But the situation on the ground in Ukraine hasn’t gone the way both Trump and Putin expected, with Russian forces caught off guard by the bravery and tactics deployed by their Ukrainian counterparts, who have adeptly countered the Russian military’s “Deep Strike” doctrine, which depends on fast moving columns advancing on different axes to encircle the enemy, by moving small units behind advancing Russian units to carry out ambush and hit-and-run attacks on the enemy’s supply lines, as noted by military analyst Dr. Mike Martin.

This has not only slowed Russia’s advance on the Ukrainian capital Kyiv, but also caused unexpectedly high casualties for the invading army. The Ukraine Defense Department claimed to have killed 3,500 Russian soldiers within the first 72 hours of the conflict, while streams of video footage show destroyed and abandoned Russian armored and convoy vehicles strewn along the country’s highways.

U.S. defense officials are said to be “flabbergasted” that a Russian invasion force, fully prepared and operating from Russian soil, has been unable to move more than tens of miles into an adjoining country, with a senior retired U.S. Air Force officer telling Newsweek, “In three days, Russia couldn’t achieve what we did in three hours in Iraq in 2003.”

A bigger surprise to Moscow is the way in which Putin’s aggression has unified European Union and NATO members like never before.

And on the same day, the U.S. State Department announced it was sending another $350 million in military aid to the Ukraine, a Defense Department official told the Wall Street Journal that Ukrainian anti-air and antitank weapons have thus far foiled an invasion into the capital, adding, “We continue to believe based on what we’ve observed that this resistance is greater than what the Russians expected.”

But a bigger surprise to Moscow is the way in which Putin’s aggression has unified European Union and NATO members like never before, with European leaders calling it the continent’s “9/11 moment,” a wakeup call for the “necessity of hard power,” with French Ambassador to the U.S. Philippe Etienne describing this united front as nothing less than “a turning point in the history of our continent.”

Germany reversed its historic policy against sending weapons to conflict zones, as Switzerland defied its long-standing policy of neutrality by sending anti-tank weapons and other forms of military aid, with the European Union, for the first time ever, agreeing to directly finance the purchase and the delivery of arms for the Ukrainian military, a move described by the president of the European Commission as a “watershed moment.”

Russian flights have been banned from European airspace. Russia has been kicked out of the FIFA and UEFA football championships. Russian state media outlets have been banned on the continent. Russian vodka is being pulled from European shelves. Russian banks have been denied access to the international banking system SWIFT, as Moscow is slapped with unprecedented sanctions, causing the Russian currency to collapse, and the economy to crater in the blink of an eye, causing some of the oligarchs to turn against Putin.

Beijing will now understand that the same tools used by a united Western alliance against Russia, which are already doing real damage to the Russian economy, will be used against it should it make a move on Taiwan.

Moreover, the Western alliance has awoken to the threat laid down by Russian and Chinese military aggression, realizing that soft power (diplomacy, ideals, and culture) isn’t enough to counter regimes willing to exert hard power (kinetic and hybrid military threats and attacks). What’s needed are an array of tools, including stronger and more meaningful security alliances, and a willingness to spend more on defense.

The West is rediscovering the well-known Latin proverb “Si vis pacem, para bellum” – “If you want peace, prepare for war,” as noted by Foreign Policy columnist Caroline d Gruyter, who rightly argues that peace is attainable only if both sides prefer peace to war, and to achieve that “you need to make war too costly to remain an option. It’s called deterrence.”

While Xi Jinping has made no secret of its intent to invade Taiwan at some point in the immediate to near future, he’s ambitions will certainly be sobered by the way in which the U.S. President Joe Biden has quietly but adeptly reinvigorated his country’s alliance with EU and NATO members.

Recently, Biden announced he will send a delegation of former senior defense and security officials to Taiwan next week, as a sign of support for the disputed island territory.

To that end, the establishment of the Quadrilateral Security Dialogue, or QUAD, which includes the U.S., Australia, India and Japan, is another example of the way in which the Biden administration has prioritized international alliances in the face of Chinese imperialist ambitions, a move that now looks ever more salient in the wake of Russia’s invasion of Ukraine.

It’s, therefore, reasonable to conclude that Russia’s actions, along with the response by the West to them, have made the prospect of an imminent Chinese invasion of Taiwan far less likely.