Paradoxically the global lockdown could potentially create a new, more organic interest, and resurgence in the communal experience that promotional ‘entertainment’ centers and the non-profit independent cinema have been struggling with. 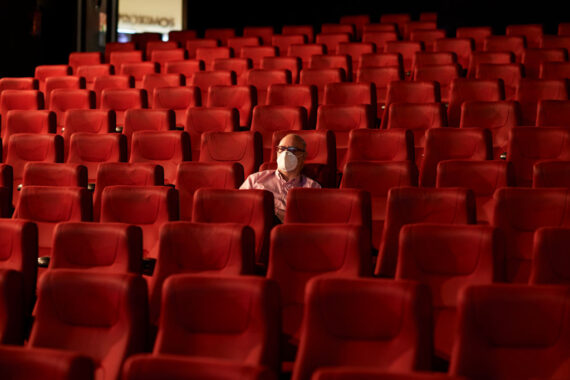 A man wearing a face mask waits for the beginning of the film in cinema on June 12, 2020 in Madrid. Spain has largely ended the lockdown it imposed to curb the spread of Covid-19, which caused the death of more than 27,000 people across the country. Photo by Carlos Alvarez, Getty Images

The complete stoppage of film production and theatrical releases, due to the coronavirus, has spawned several articles and ideas about the future direction of cinema. The inability to work with other people on set (actors, camera, sound, costume, art departments, etc.) seems an insurmountable challenge to current production methods and the massive economic consequences have created a pessimistic outlook on working in what is generally referred to as ‘the industry’ (and in some ways, erroneously since there are multiple types of them around the world- including within the U.S.).

Alternatively, with a significant portion of the world in lockdown, there has been a massive and exponential increase in the online streaming of new, different and classic cinema as well as a potential expansion of audiences, viewers and markets. The history of cinema is filled with examples of new technologies and cataclysmic events, such as war, radically altering both production and distribution methods.

The advent of sound, post-war Italy and the invention of video are three significant periods in film history that resulted in massive shifts in how films were developed and produced. We are now approaching another significant period that could see a different approach to both the production and distribution of cinema.

The silent film Sunrise: A Song of Two Humans (1927) by F.W. Murnau showcases the possibilities of a cinematic and storytelling language that has reached a plateau of beautiful and evocative cinematography with lighting and shadows as well as shot selections (e.g. wide, medium, close-up) that both contribute to and open up the narrative. The performance of this film is understated and effective in capturing emotion through movement and expression with minimal use of inter-titles – in comparison the first sound feature with synchronized talking called The Jazz Singer (1927) was released the same year with a completely different approach.

The fictionalized film Singin’ in the Rain (1952) gives a technicolor history lesson of Hollywood’s then past and how the advent of sound created a myriad of new problems: bulky, static microphones that picked up unwanted sounds; previously silent film stars suddenly with unusual or accented voices; and a shift in writing from showing the story to ‘telling’ it. These are some of the more obvious dilemmas that occurred with a sudden and dramatic shift to ‘talking pictures’- the result was a loss of stardom for many silent actors and more profoundly a period of stagnation especially in terms of storytelling and cinematography during the 1930s.

The end of WWII lays the foundation for another radical shift in film production methods. Italy had been devastated by the fighting that had seen the Fascists dominate only to be dispersed with the country turning into a battleground between Italian Partisans, invading Nazi regiments and U.S. troops coming from the south. Classical monuments, local neighborhoods and entire cities were left in ruin. London stoically survived, Paris was left psychologically battered but relatively untouched, Berlin was divided by the victors and Japan was rebuilt. Rome and the rest of Italy were largely left to mend themselves. This created a myriad of locations for Italian filmmakers who had been trained in the studio system of the 1930s (ironically with the benevolent association of Vittorio Mussolini who was the second son of the Italian Fascist leader ‘Il Duce’).

Using large scale cameras, scripted stories and experienced technicians that used the style of the previous decade mixed with a dramatic use of non-professional actors, the use of actual locations of devastated war-torn cities and a myriad of extra people and sights, this confluence of time, place and talent became known as Italian Neo-Realism, and includes directors such as Roberto Rossellini (Rome, Open City – 1945) and Vittorio De Sica (Bicycle Thieves – 1948). This cast a long and influential shadow over cinema during the next several decades in terms of both production style and the preponderance of themes related to poverty and desperation.

The Sony portapak (1967) is in many ways the start date of the video revolution – a small, affordable video camera with separate VTR (video tape recorder) attached by a cable. The resolution was low by contemporary standards and it originally only recorded in black and white but the technology was still seized upon by artists and filmmakers.

The ability to pick up a camera, shoot and see whatever you wanted without the (burdensome and expensive) process of learning the art of cinematography and waiting for several days to see the footage, appealed to visual artists who alternated between using it for documenting performance art and as part of the work itself.

Read: The Fight Against Social Inequality Is Fundamental to Defeat COVID-19

The Korean artist Nam Jun Paik famously created works that made use of video monitors in live multi-media performances such as TV Bra For Living Sculpture (1969) as well as large-scale gallery installations. The early video had its aesthetic despite its limitations – often hand-held with extreme contrast and sometimes brash colors.

Video did not immediately replace film (in fact 16mm documentaries were still the standard in the 1970s and common in the 1980s)- but it has eventually come to dominate every form of Film and TV production just over half a century after the portapak.

Virtually every documentary is now shot on video (it has long been the best choice in terms of cost, accessibility, and flexibility), and almost every feature film is now shot in high-end digital video (albeit in the ‘cinematic’ style of traditional 35mm). Ironically the contemporary genre of ‘artist film’ to be projected in a gallery is the one area where 16mm or 35mm film is now used (mostly as a defining aesthetic to differentiate itself from what is now the dominant medium of video).

We have been living in an electronic age for several decades and home video has also exploded and spread from videotapes (the 1980s-1990s) to DVDs (2000s) and more recent instantaneous streaming.

When larger crewed productions resume, the sheer volume of canceled or delayed projects seems likely to be drastically reduced due to several factors such as minimized or canceled budgets, compromised locations and the inability to travel to certain regions or countries. Co-productions between countries has been the norm in the 21st century in terms of access to lucrative tax incentives for shooting in a certain state or country but this will likely change. There will be enormous political pressure and accountability in terms of funding and grants, and potentially difficult questions in terms of human logistics as well as things like location insurance and access to buildings and landmarks.

In this context a new kind of cinema is ripe to be born both in terms of production and distribution; museums and galleries could take on a larger role in financing and promoting feature films and there could potentially be a kind of re-convergence between art and cinema.

The immediate inclination to create films without a crew points back to some of the early formalist work done by visual artists such as Hans Richter in Germany and Fernand Leger in France (who would take their painterly style and apply it to the new medium of cinema in the 1920s), or by the previously mentioned ‘video artists’ of the 1960s and 1970s where lo-fi works created a new kind of aesthetic. There are numerous examples of filmmakers working this way already and the current conditions could accelerate these trends, such as increased CGI and animated elements, or collaboration that is structured around a post-production exchange of footage, clips, music composition and interactivity.

The slowdown in the pace of life has also allowed many people to fill up their time with reading, listening and watching films again as opposed to simply flicking through clips (something that is surprisingly common in the 21st century – even among students of film).

Streaming sites have been enormously successful over the last half-decade and sites such as Mubi and the Criterion Channel offer more of a world cinema perspective alongside ‘classic’ Hollywood fare. The current streaming bonanza could potentially benefit a direct distribution model for tens of thousands of films (through new and different streaming channels) that have played at film festivals but had a limited reach to their target audience.

The concept of theatrical distribution has also been a hot topic for several years provoking much discussion and writing – the idea of going to the cinema as a kind of over-priced specialist event (like the Opera) or supporting your local ‘independent’ theatre that seats less than 100 as a kind of good-will gesture, have both been exposed as flawed business models that have been struggling to keep afloat.

Many smaller cinemas in Europe and North America have closed in the last decade and those that have survived are often pushed into watered-down programming choices in an attempt to appeal to as broad an audience as possible, while essentially offering a version of the same content that crowds the larger cinemas.

A decline in large-scale film productions could benefit filmmakers who may be shooting a more intimate and new kind of cinema. In many ways streaming sites, film festivals and museum (cinematheque) programs have already been the last bastion in offering an informed, diverse and experimental choice of feature films outside of the multiplex cinemas. Now may be a time to increase collaboration (streaming festivals online), look for innovation (broadened types of hybrid releases) and even switch economic models (tailored distribution).

Paradoxically the global lockdown could potentially create a new, more organic interest, and resurgence in the communal experience that promotional ‘entertainment’ centers and the non-profit independent cinema have been struggling with.