The Fight Against Social Inequality Is Fundamental to Defeat COVID-19

To overcome the global pandemic, it is vital to understand the sources of socioeconomic inequalities that kill more people than COVID-19. 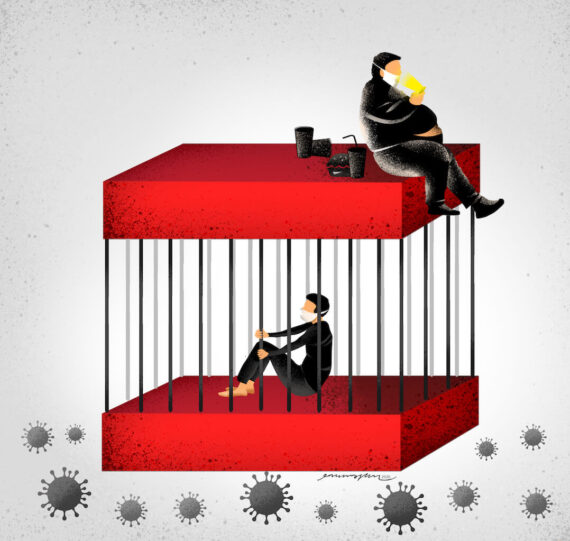 Socioeconomic inequality appears to be the first phenomenon directly affected whenever a large-scale crisis occurs. This is also true for the COVID-19 pandemic. Illustration by Onur Askin for Politics Today

Humans are neither biologically open nor resistant to all diseases, nor do they have equal opportunities in terms of protecting their health, staying at home, isolation, treatment, and rehabilitation for various socioeconomic reasons. Although measures such as staying at home, which have been implemented all over the world, seem to be meaningful especially for the middle classes with fixed income and job guarantee, the pandemic will predictably cause many self-employed people and workers to lose their jobs and will completely deprive them of their income. As socioeconomic inequalities seriously affect access to health services and the likelihood of getting infected will vary in direct correlation to people’s socioeconomic status in society, this cycle will increase exponentially during the pandemic.

Increase in Unemployment Will Lead to Poverty

Who will be most affected by the current crisis? According to a recent analysis by International Labor Organization (ILO), full or partial lockdowns as a result of the COVID-19 pandemic are affecting approximately 2.7 billion workers globally, currently representing 81 percent of the world’s workforce. In the second quarter of 2020, working time equivalent to 195 million full-time workers will be lost, and the workers will seriously pay for this loss. One billion 250 million workers work in the sectors that are at “serious and destructive” risk due to the pandemic. Similarly, according to this report, craftsmen and artisans working on their own, and small business owners will suffer a great loss. Nearly 25 million people are expected to remain unemployed till the end of the year, and a contraction of three per cent in the world economy is expected at best, six percent with a moderate estimate and 10 percent if worse.

The pandemic has led many people to work remotely. However, everyone is not equal in terms of work conditions. Workers are exposed to different risks depending on their income and whether their economic sector is under lockdown. Some of the people working in low-income jobs such as healthcare, shipping, transportation, and critical supply chains (food, medicine, delivery, primary industry, and services) continue to work. Employees in these sectors are exposed to a higher risk of infection since they cannot work from home.

On the other hand, many low-income workers, especially those working in the service sector, cannot work from home, and the work in these sectors is on halt because of the lockdown. A study in the U.S. shows that there is a close link between the opportunity to work from home and the income of the job. According to this, only 9.2 percent of workers in the lowest quarter of the income segment (lower 25 percent) are eligible to work from home. In comparison, this rate is 20.1 percent in the second quarter income segment, 37.3 percent in the third quarter segment, and among those who have the highest income, the rate is 61.5 percent.

Though staying at home slows the spread of the virus, it’s not an option for some. A general lockdown means unemployment and loss of income for millions working in low-income jobs. When the rescue programs launched by governments are considered, it is evident that the share allocated to these segments is incomparably lower than the percentage allocated to save capital. Governments rescue programs continue to prioritize capital and allocate scarce resources to saving big businesses. In the coming global economic crisis, these programs may deepen inequalities even further.

A contraction in the economy and loss of jobs directly affects the lowest socioeconomic group and creates irreparable rifts in the social structure. Therefore, it is essential to implement practices prioritizing the elderly, the disabled, widows and orphans, unemployed, and under-skilled as well as temporary workers. However, the impact of economic inequality is not limited to this; socioeconomic factors also have direct effects on the manifestations of the disease.

Inequality in Disease and Health

A closer look at the data provided by inequality studies shows that health and disease are not distributed equally among people. Generally, diseases or illnesses of the wealthy and the poor are different from each other. Problems like addiction, chronic diseases, occupational and professional diseases, work accidents, and infant deaths have a direct relationship with poverty. We also see that serious crises, such as the coronavirus pandemic, increase the health burden of those at the bottom in the social pyramid, causing further disastrous effects such as violence, crime, and suicide.

Socioeconomic inequality appears to be the first phenomenon directly affected whenever a large-scale crisis occurs. This is also true for the COVID-19 pandemic. This crisis should be carefully managed for economically poor and precarious parts of societies.

In the article titled Income Inequality and Health, Jennifer M. Mellor and Jeffrey D. Milyo, show the link between socioeconomic inequalities and addiction, psychological disorders, and chronic diseases through empirical data. Similarly, William A. Vega and William M. Sribney find that life expectancy of the top 20 per cent was 5 years longer than the bottom 20 per cent thirty years ago – now it has risen to 12 years for men and 14 years for women.

In their report for the International Food Policy Research Institute, Rob Vos, Will Martin, and David Laborde estimate that a one per cent contraction in the global economy will increase the number of the poor and also the number of people without food security by two percent (i.e. 14 million people). The world economy is expected to shrink by three per cent at best and six to seven per cent with a more reasonable estimate. This situation poses a threat in accessing food, and this pandemic will push more than 50 million people in the world to absolute poverty.

In a note titled The Social Impact of COVID-19 published on April 6 by the United Nations Department of Economic and Social Affairs, it states that if correct social policies are not applied, inequality, exclusion, discrimination, and global unemployment in the medium and long terms will increase. The note highlights that comprehensive social protection systems should be implemented, basic income security should be ensured, and social capacity should be enhanced. In another report, the need for sharing responsibilities and addressing the problem in a multidimensional way is also expressed.

Why the Pandemic Kills Afro-Americans and Poor People

The poor population, having limited or unqualified access to health services even under normal circumstances, constitutes the most vulnerable populace in times of a pandemic. Newspapers in the U.S. have been covering news and analyses that the pandemic has become more prevalent among Afro-Americans in socioeconomically disadvantaged areas and mortality rates are higher.

According to data published by several states and major cities reported in the New York Times on April 7, 2020, the numbers and ratios of infection and death are quite high among the Afro-American population in the United States. A family physician and epidemiologist, Camara Phyllis Jones, explains this to be a result of unequal wealth distribution. The main reason behind this is thought to be the structural racism in America.

Afro-Americans are not the only ones suffering from this inequality, but also other poor people. As stated above, poor people have more chronic diseases such as diabetes, heart disease, and lung failure that can cause complications due to getting COVID-19. Since their access to health services is already low, losing jobs will cause further devastation for these people in the near future. These socioeconomic inequalities sharply uncovered by the coronavirus in the U.S. more or less reflect a general trend in the rest of the world.

The Cycle of Debt

Since the 1980s, the share of the highest income group in the world contributing to economic growth has increased continuously. This has led to an increasingly comfortable life for the upper classes. It became evident once more in a recent study by Atif Mian, Ludwig Straub, and Amir Sufi that the upper class gets more shares from the economic resources and income. In other words, while the financial wealth of a minority increases, the financial debt of the masses increases as well. There is a very close connection between the two.

A similar situation is seen in states, which borrow continuously to maintain public services and order. The wealth accumulated in the hands of the group at the top constitutes the primary source of these debts. A significant proportion of the taxes collected by the state from the public to carry out public services goes to pay the interest on these debts. Thus, once again, it functions as an element that increases the wealth of those at the top. For this reason, many countries have reached unpatched deficits in public budgets that have been financed by debt in recent years.

VIDEO: The Global Rise of the Far-Right: Emergence

Expectedly following the economic losses caused by the COVID-19, borrowing tendencies of the states will accelerate. As state economies contract, there will be shrinkage in governments tax revenues. In other words, while the state revenues are decreasing, their expenses, too, are increasing, making the gap larger. Higher budgets are needed to combat the pandemic and to fix social problems, causing extra debts.

When there is an excess between supply and demand in favor of demand, prices rise as an economic rule. In this sense, the increase in global debt demand will also increase borrowing costs. After this pandemic, states will probably be under high debt burden with high-interest rates. This may be a factor that starts a new wave of inequality. This shows us that in the medium term, inequality will increase both among income groups and among countries.

The Pandemic Will End, But will the Inequalities?

To overcome the global pandemic, it is vital to understand the sources of socioeconomic inequalities that create more widespread problems and kill more people than  COVID-19. The current pandemic is likely to stabilize in a few months, and a medical remedy will be found in the next few months. However, if the problems emanating from social inequality are not correctly addressed, people will have to face more profound consequences.

Therefore, using the findings of inequality and poverty studies is important to maintain and rehabilitate the social structure during and after the pandemic. Only then can this pandemic be regarded as an opportunity to realize the harsh and disproportionate effects of socioeconomic inequalities on society and to provide critical data to produce a more structural solution. 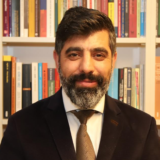 Lutfi Sunar is Associate Professor of Sociology at Istanbul Medeniyet University, Turkey. He is the author of Marx and Weber on Oriental Societies, the co-editor of Eurocentrism at the Margins and Social Justice and Islamic Economics, and the editor of Debates on Civilization in the Muslim World.