TIME, praising all the military coups that happened since May 14 1950, Turkey's transition into multiparty system, seized the opportunity to celebrate the July 15 coup perpetrated by FETÖ, not breaking with its tradition. 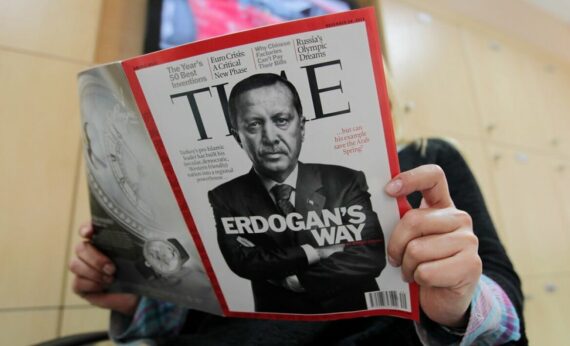 While theoreticians, who analyze world politics through media continue to guess what will happen throughout the year by looking at the New Year’s cover of The Economist, another magazine has been clearly conveying the developments to its readers without any encoded messages by events and people put on the cover. Considering the closest ones to home, this magazine covered many topics ranging from the headscarf discussions to Naim Süleymanoğlu’s success at the Olympic Games after filtering them through an American and Western perspective.

The New York-based magazine registered as TIME started to be published weekly in 1923, later spreading to Europe, the Middle East, Africa, Asia, South Pacific and South America over the years. The only constants of the magazine were its publication language being English and foretelling the future through local and international events or figures that were put on to the cover.

While Charlie Chaplin who made it to the cover in 1925 became a leading force in cinema, Mahatma Gandhi who was on a 1931 cover of the magazine became a world-renowned figure in the following years. Similarly, TIME had put Nazi Germany’s Commander of the Naval Forces Erich Raeder on its cover in 1942 and touched on his passive nature and military blunders. Raeder resigned from his post the following year; “he had no idea about submarine warfare. He never cared about it. He was obsessed with ships; yet, he failed to equip them with a substantial air force. He probably was the weakest link of the Nazi Army” were some of the comments that continued to haunt Raeder for many more years. Talking about the future of computers in 1983 and covering the internet in 1990s, the magazine was the most prominent conveyor of political developments.

Leaders deemed authoritarian by TIME were deposed via coups

Putting coups carried out in many countries to its cover, the magazine came to be known as a “coup-loving” publication because of its disposition towards the events. The 1953 Iran, 1954 Panama and 1973 Chile coups were all narrated as the fall of a dictator and the victory of the public.

TIME never skipped the coups in Turkey, as well. While the magazine is mostly known for its cover with Kenan Evren and the caption “Holding Turkey Together,” this wasn’t the first such incident at TIME.

In 1958, Adnan Menderes was put on the cover with the caption “Turkey’s Premier Menderes.” The magazine wrote the following about Menderes: “With his every year in office, Menderes has become more autocratic, more sensitive to criticism. Striking out in fury at anyone questioning his policies, he has half smothered both the press and opposition political parties under a blanket of repressive legislation.” Analogous to Menderes, Iranian Prime Minister Mohammad Mosaddegh prior to the 1953 coup, Guatemala’s President Jacobo Arbenz prior to the 1954 coup and Chile’s President Salvador Allende prior to the 1973 coup were all put on the cover of TIME, while being mentioned in news pieces as “once democrats who resorted to authoritarianism.”

The Army is responsible for upholding the constitution

While it was not on the covers, the coup of May 27 1960 found itself a place in the magazine. Using a photograph which had a group of people celebrating the coup, TIME was justifying the coup with the following passage: “The Turkish army has long scrupulously observed the admonition of the late great Kemal Ataturk that the army should stay out of partisan politics. But it also remembered that Ataturk charged it with guarding the constitution.”

The coup of September 12 1980 was welcomed in the US with the exclamatory expression “our boys did it.” On the covers of TIME‘s Europe, Asia and South Pacific editions of September 29 1980 issue, there was the photograph of Kenan Evren. On the eight page, in a long feature article titled “Holding Turkey Together”, the events leading to the coup and Kenan Evren himself were extracted. The coup was mentioned in the following way:

“After months of rising terrorism by both the extreme left and extreme right, the country allowed itself to settle into a state of unaccustomed relaxation. Civilians waved at tanks rumbling through the streets of Istanbul. Automobile drivers shook hands with soldiers who manned the roadblocks. Storekeepers raised their bombproof shutters for the first time in months, and restaurants began to fill up again in the evenings. Some city dwellers looked far trimmer than usual, simply because they no longer packed pistols inside their coats or waistbands.”

TIME had signaled the postmodern coup of February 28 1997 from the very first days of the Welfare Party. Publishing an article titled “Secular State Suspended?” when the party came into power, the magazine was almost conveying the message “how could you allow such a government” as Necmettin Erbakan’s to the Turkish army. “He [Erbakan] is a populist, pro-Islamic politician whose party did not field a single female candidate in the last elections […] Last week Erbakan became the head of the first Islamist-majority coalition government in Turkey since Kemal Ataturk declared it a secular state in 1923,” wrote TIME.

Not pondering on the decisions of February 28, TIME had praised Mesut Yılmaz who became the prime minister after Welfare Party’s coalition was deposed by the military with an article titled “Mr. Secular”: “Turkish military believes that it is better to be sad than sorry in terms of Turkey’s secular future. President Süleyman Demirel becoming the chair of NATO member countries and Mesut Yılmaz, the leader of the lesser opposition party with 129 seats in a parliament of 550, becoming the prime minister verifies the military’s approach. While some argue that Yılmaz lacks the political mediation skills to form a sustainable government, his decision to withdraw from Libya and his stance against the rise of Islamic fundamentalism dissipate the suspicions. After all, the military sacked Prime Minister Necmettin Erbakan for doing the opposite of the said decisions. Moreover, NATO will also love Yılmaz for taking these decisions.”

Perspective on April 27 E-Memorandum: “AK Party is a threat to the public”

TIME‘s comment on the e-memorandum of April 27 2007 was the following: “Military has always been a strong political actor in Turkey and it has carried out four coups against those threatening the country’s secular system since 1950. In 2007, the military published a concealed threat which led to snap elections. Practices like singing hymns in schools instead of mosques and organizing Holy Quran recitation competitions on April 23 which were introduced by the AK Party government were always seen as a threat to the very existence of the republic by the military.

Expediting the crisis by writing a condemning declaration against the ruling party electing the president, the military expected the Turkish voters agree with the generals’ view that pro-Islamic AK Party is a threat to the nation. With the coup attempt that will go down in history as e-memorandum, they hoped to sway the minds of the people as they did before. They aimed to force the AK Party to form a coalition, causing them to share the power.”

The coup attempt of July 15 was also covered by TIME and articles praising the previous coups in Turkey were being published on the magazine’s website while the coup was still going on. The article written by Lily Rothman was adding insult to injury even before the people were able to thwart the coup: “In that 1960 coup, General Cemal Gursel was named President, Premier and Defense Minister, leaving the world with hopes that the nation was on its way back to true democracy. It would only be eleven years, however, before a group of military leaders handed a radio newscaster a memorandum to read out loud, telling the people of Turkey that the government had once again ‘pushed our country into anarchy, fratricide and social and economic unrest’ and thus ‘the Turkish armed forces, fulfilling their legal duty to protect the republic, will take power.'”

“The country resists an attempted coup, but the worst could be yet to come”

Even before the coup was over, the magazine was praising the perpetrators and the coup itself. When the coup was thwarted, the first issue of TIME published after the coup included a photograph of Turkish people resisting the coup accompanied by the title “Turkey’s Longest Night”. In the subtitle, however, it was noted that “The country resists an attempted coup, but the worst could be yet to come.” The magazine referred to the coup as an “amateurish attempt.”

While President Erdoğan was described as oppressive, the magazine also argued that there were people in Turkey who wanted the army, the protector of the republic, to take action. The subtitle “the worst could be yet to come” was interpreted as Turkey entering a political deadlock and hinting that increasing polarization might create an armed conflict among the people.

Yet once again, TIME had sided itself with a coup. After all, Erdoğan had made it to the cover of the magazine even two years before the December 17-25 incidents, which acted as a precursor to the coup, and was criticized for allegedly becoming an autocrat.

TIME, praising all the military coups that happened since May 14 1950, Turkey’s transition into multiparty system, seized the opportunity to celebrate the July 15 coup perpetrated by FETÖ, not breaking with its tradition. Even after the coup attempt was thwarted by the people, the magazine continued to publish many articles that implied if the coup was successful, it would be better for Turkey, consolidating its putschist position.