For many Cypriots, peace talks are a last chance for peace on the island. If they fail, it is unlikely that anyone will accept the continuation of the status quo. 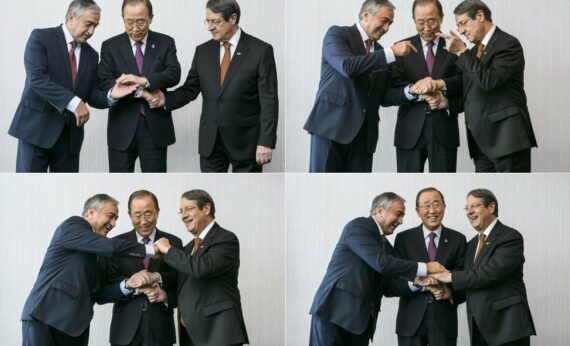 The date was May 15, 2015. Greek Cypriot leader Nicos Anastasiades and his Turkish Cypriot counterpart Mustafa Akinci had just announced the resumption of peace talks in the divided island of Cyprus. As the two posed for the press, none looked happier than the man who had brought them together, Espen Barth Eide, the UN’s envoy to the island.

The Norwegian diplomat’s ear-to-ear smile gave hope to over a million people on both sides of the divide. It was a hope they were all too familiar with, that had been given to them time and time again for over 40 years, only for it to be taken away from them. Barely a year had passed since they saw Anastasiades and Akinci’s predecessor, Dervis Eroglu, declaring their commitment to reunite the island under a bi-zonal, bi-communal federal system. Eight months later, the talks were off again due to disagreements over drilling for offshore natural gas.This did not help alleviate the trauma of 2004, when a plan proposed by then-UN Secretary General Kofi Annan to reunite Cyprus failed. Although Turkish Cypriots had approved the plan in a referendum held in the breakaway Turkish Republic of Northern Cyprus, Greek Cypriots in the internationally recognized Republic of Cyprus rejected it. As a result, Cyprus entered the European Union as a divided country.But this time there was something different in the air. Standing before an audience of hopeful onlookers were two leaders, both eager to end the stalemate, and an incentive for both the people and the international community to support them in their quest.

What was that incentive? Of course, natural gas. The discovery of hydrocarbons under the eastern Mediterranean seabed completely changed the dynamics of the on-again-off-again Cyprus peace talks. Its discovery particularly delighted the European gas market, which was long looking to diversify its imports away from Russia. Considering the most feasible supply route from the eastern Mediterranean to Europe would be building pipelines through Turkey, the EU had more reason to encourage both sides in Cyprus to sit down and come to an agreement.

A solution to the Cyprus problem would not only bring benefits to the EU, but would also give the economy of Cyprus a much-needed boost. It would also allow other regional players, such as Israel and Egypt, to cash in on the gas bonanza and enjoy better ties with Turkey. As for Turkey, a satisfactory deal would pave the way for the withdrawal of troops from the island, which would speed up its EU accession process.

So, Akinci and Anastasiades wasted no time. They started by ironing out differences in the basic areas of contention, making smooth and steady progress in an atmosphere of warm enthusiasm. But there was a huge elephant in the room that the two leaders were ignoring – the question of how the land itself would be divided.

Now, as the two sides begin to tackle the main points of disagreement that have repeatedly led to the collapse of talks in the past, the mood has suddenly changed.

On November 22, the talks hit their first major snag since they had resumed when Akinci and Anastasiades left two-day meetings in Geneva without an agreement on territory.

Currently, Turkish Cypriots control around 36 percent of the island. The Turkish Cypriot side offered a concession of 7 percent, which would bring their territorial control down to 29 percent. The Greek Cypriot side, on the other hand, demanded an extra 4 percent, leaving them in control of 75 percent of the island. The demand of the latter included all of the Guzelyurt (Morphou) district, the return of Kapali Maras (Varosha) and the establishment of a canton in the Karpaz (Karpasia) peninsula.

SecurityBy Serhan Afacan
This territorial dispute stems back to the Turkish military intervention in Cyprus in July 1974. Turkey acted as a legal guarantor of peace following a coup on the island which was part of a plot to annex Cyprus to Greece. In accordance with the 1960 Treaty of Guarantee, to which Greece and the UK are also signatories, Turkey reserved the right to intervene, unilaterally or otherwise, with the intent to re-establish the state of affairs on the island. Yet Turkey stopped short of a full takeover and only took control of the north, which became a de facto safe haven for persecuted Turkish Cypriots. As Turkish Cypriots holed up in enclaves in the south fled to the Turkish-controlled north, some 200,000 Greek Cypriots were displaced from their homes.In November 1983, Turkish Cypriots declared independence in the north and started issuing new deeds for Greek Cypriots properties that were left behind. These properties were either sold or handed out to migrants from Turkey who arrived after the island was split in 1974. Today, these migrants comprise around half of the population in the Turkish north. Around 40,000 of them, mainly earlier arrivals, were granted citizenship rights in the self-declared Turkish Republic of Northern Cyprus (TRNC). The remainder live in the TRNC on a residency permit or illegally.Admittedly, to clean up the past problems, the Turkish Cypriots are prepared to make some concessions. While some Greek Cypriots who had their properties seized will have those properties returned, others may be compensated either through a payout or by being given other properties elsewhere equal to the value of their seized property. The Greek Cypriot administration has therefore demanded that Guzelyurt be ceded to the Greek Cypriot federal zone so that some 100,000 Greek Cypriots can be moved there. They have also demanded that around 66,000 Greek Cypriots be allowed to live and be given full rights within the Turkish Cypriot federal zone. Furthermore, the Greek Cypriots want the administration of Christian religious sites in the Turkish Cypriot zone, as well as four Maronite villages, to be handed over.

Having failed to reach an agreement in November, the two sides are expected to submit new maps in the next meetings in Geneva on January 9, 2017. Three days later they will be joined by the three guarantor states – Turkey, Greece and the UK – to discuss the issue of guarantorship.

Both Greece and the UK have previously stated their willingness to waive their guarantor rights. The Greek Cypriot administration has also demanded a complete pull-out of Turkish troops from the island. But the Turkish Cypriots oppose the complete withdrawal of Turkish troops. Turkey’s stance, meanwhile, remains ambiguous. If offered the right incentives, such as greater integration with the EU or the financial benefits of hosting a pipeline, Turkey may forgo its guarantor rights, or settle for a military base on the island, similar to the British bases.

In many ways, the fate of Cyprus partly depends on Turkey’s relationship with the EU. These relations took a turn for the worse recently when the European Parliament condemned Turkey for its crackdown on a network of state infiltrators who stand accused of being behind a failed coup attempt in July. Greece’s recent refusal to extradite fleeing coup plotters to Turkey also hasn’t helped.

Likewise, a rapprochement between Turkey and Russia following almost a year of strained ties presents its own problems. With Moscow and Ankara deciding to push ahead with the Turk Stream pipeline, which will pump gas from Russia to the Turkish-Greek border via the Black Sea, it is likely that any pipeline built through Turkey from the eastern Mediterranean will join the same network. This means that any gas Europe seeks to import from the eastern Mediterranean or Central Asia will be mixed with Russian gas as well. So much for Europe cutting off its dependence on Russia.

Low global crude oil prices also risk putting off potential investors from approaching the eastern Mediterranean reserves. Energy giants must first be convinced that exploring, exploiting and exporting natural gas from the area will be profitable. So far, the reserves found in Cypriot waters are not enough to economically justify such investment, which means it would need to be combined with Egyptian and Israeli reserves. But in a region already plagued by political instability, investing in the eastern Mediterranean may prove to be a risk no company is willing to take.

As the gas fueling these peace talks begins to run low, Eide’s inspiring grin is gradually turning into a frown. Eide himself is now warning of a “deterioration of trust” and a “hardening of positions” among ordinary Greek and Turkish Cypriots. For many Cypriots, these talks are a last chance for peace on the island. If they fail, it is unlikely that anyone will accept the continuation of the status quo. 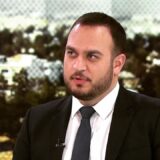 Based in London, Ertan Karpazli is the Editor-in-Chief of Radio EastMed and a founding member of Cezire Association. He was previously a journalist for TRT World in Istanbul.

Also Read
US Lifts Arms Embargo on Cyprus, But Only Selling Smoke