Turkey's Drilling Ships to Respond to Injustice in the Eastern Mediterranean

The sirens of Fatih and Yavuz are now ringing like alarm bells to awake those dreaming about ignoring Ankara and Nicosia in the Mediterranean, while the region is on the brink of a global-scale geopolitical fight. 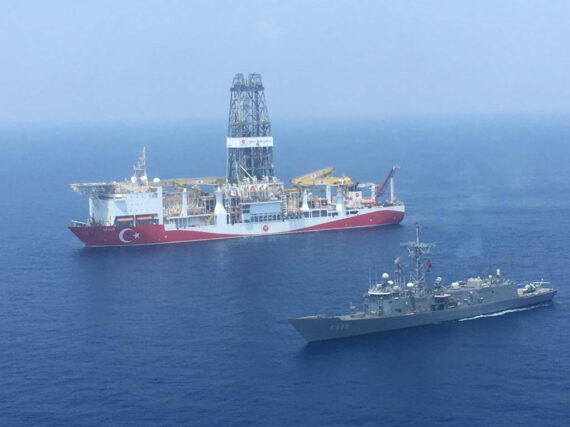 An aerial photo shows Turkish-flagged drill ship Yavuz' continue offshore drilling operations in company with Turkish battleship in the west of the Island of Cyprus in the Mediterranean Sea on July 11, 2019. Anadolu Agency

Following its launching ceremony in the Dilovası district of Kocaeli province on June 20, Turkey’s second drilling ship Yavuz set off to the Eastern Mediterranean, near the other Turkish-flagged drilling ship Fatih. In doing so, Ankara declared to its friends and rivals once again that it will defend the rights of Turkey and the Turkish Republic of Northern Cyprus (TRNC) in the Mediterranean in accordance with international law.

With its two drilling ships along with its seismic exploration ships, Ankara made it clear that it will fight for its maritime zones and has the required skills for the fight that is ongoing as an energy struggle in neighboring waters. This has seemingly disturbed the officials of Greece and the Greek Cypriot administration, who have been issuing statements that disregard the rights of Turkey and the TRNC in the Eastern Mediterranean.

As known, the Greek Cypriot administration is striving to hinder the drilling activities of Turkey in Turkey’s own continental shelf and in areas where Turkish Cypriot authorities have licensed the country to work in the Mediterranean by using the advantage of being an EU member. By acting as if they represent the entire island, the Greek Cypriot administration renders the energy resources of Cyprus a component of the political stance that disregards the TRNC’s and the Turkish Cypriots’ right to have an economic presence.

This policy of the Greek Cypriot administration is not new. Greek Cyprus unilaterally declared a so-called exclusive economic zone (EEZ) by signing EEZ delineation agreements with Egypt in 2003 and with Israel in 2009. Subsequently, it made other agreements with foreign energy companies that allowed them to conduct drilling activities around the island without asking for the permission or approval of the TRNC, which made the agreements unlawful.

With such actions, the Greek Cypriot administration does not only ignore the presence of the TRNC and Turkish people on the island, but also paves the way for new formations that exclude Turkey, which has the longest Mediterranean coastline. Turkey is trying to be isolated as an actor in the discovery, drilling and sharing processes of energy resources whereas the TRNC, another important actor, is being completely ignored. Remembering the latest examples on the manipulation of these economic parameters for political purposes would be enough to understand the severity of the issue.

Ankara is exercising its jus natural in accordance with the outward bound limits of its continental shelf in the Mediterranean, which is recognized by the UN since 2004.

The Greek Cypriot administration co-founded the Eastern Mediterranean Gas Forum with Egypt, Israel, Greece, Italy, Jordan and Palestine and encouraged European leaders to issue statements stressing that the EU will stand against Turkey on the issue in the framework of the Union policies by acting with France, Italy, Malta, Portugal and Greece during the MED7 Summit. The state or government heads of 28 EU countries, who gathered in Brussels on June 21, expressed that they condemn Turkey’s gas and oil exploration activities in the Eastern Mediterranean as a result of the propaganda run by the Greek Cypriot administration and Greece. Also, in a written statement issued by the European Council, Turkey’s activities in the Eastern Mediterranean and the Aegean were declared unlawful with reference to prior decisions.

So, the EU and the energy alliance supported by Greek Cyprus and the U.S. have predicated their political purposes in the Mediterranean on the isolation of Turkey and the disregard of the TRNC. But it must be questioned whether they have achieved to do so in line with their expectations. Looking at Turkey’s capabilities in the region with the power stemming from the TRNC and international law, the answer is definitely “no.” Despite all their “serious” statements, the new energy alliance backed by the EU and the U.S. has failed in its policy of laying claims to the hydrocarbon reserves in the Mediterranean. The activities of Fatih and Yavuz drilling ships present the leading evidence to the failure of the anti-Turkey energy alliance.

The Greek Cypriot administration signed EEC agreements with Egypt in 2003 and with Lebanon and Israel subsequently on behalf of the entire island despite not having such a right. Although Turkey announced that it does not recognize these agreements, Greek Cyprus continued signing new energy and safety agreements with the riparian countries and conducting drilling activities in the Mediterranean despite all the objections of Turkey and the TRNC. Upon this, Ankara realized that the issue of appropriating and sharing the energy resources in the region was not built as an economic move but rather motivated to exclude the TRNC and Turkey, and took a series of measures against the moves.

So, Ankara is exercising its jus natural in accordance with the outward bound limits of its continental shelf in the Mediterranean, which is recognized by the UN since 2004, and acting in line with the offshore license guarantee granted by the TRNC to the Turkish Petroleum Corporation (TPAO) in 2009 and 2012. Ankara was also authorized to conduct hydrocarbon exploration activities within its maritime zones offshore Cyprus by making a license agreement with the TRNC in 2011 against the unilateral EEC declarations of the Greek Cypriot administration. The Mediterranean journey of Fatih drilling ship is ongoing within this legal framework and in the scope of the license granted to Turkey by the TRNC. Similarly, the drilling activities of Yavuz will start within this framework in early July.

Thanks to Yavuz, Ankara has attained the ability to engage in drilling activities down to 12.200 meters offshore Cyprus.

On the other hand, Turkey displayed a great determination and made a considerable progress in developing its A2/AD (anti-access/area denial) capabilities in the military field for the protection of its maritime zones in the Mediterranean that became an issue of dispute. In the current situation, Turkey’s step to purchase S-400 air defense systems is significant for Ankara’s area denial capabilities. When Ankara obtains and deploys these systems, it will have the opportunity to close an important area on Cyprus to its rivals and enemies. As Turkey’s area denial capabilities in the Mediterranean improve, it will be possible for the country to maintain its seismic exploration and drilling activities in energy field more freely. In a nutshell, as Ankara’s area denial facilities develop in line with the naval doctrine, the projects that exclude Turkey and the TRNC will be condemned to fail no matter who supports them. The Nabucco dream had lasted quite a while. And it is not hard to project that the East-Med dream will not last that long considering the measures taken and capabilities developed by Turkey.

Thanks to Yavuz, Ankara has attained the ability to engage in drilling activities down to 12.200 meters offshore Cyprus. Yavuz is expected to reach a depth of 3.300 meters at the Karpaz-1 spot in offshore Famagusta-Kahramanmaraş, which is the first location the drilling ship has been assigned to. Similarly, Fatih is maintaining its activities in 80 kilometers west of Paphos within the so-called EEC declared by the Greek Cypriot administration. By having two (Yavuz and Fatih) of the 16 deep-sea drilling ships in the world and demonstrating its naval capabilities to ensure the security of these ships with the operations it conducts in neighboring waters, Turkey does not only show that it is present in the Mediterranean energy equation but also makes it open that it will not allow this economic game in the Mediterranean to turn into an international political plot that disregards the rights of Turkey and the TRNC.

It is known that Ankara opposes the one-sided appropriation of natural resources around the island before the resolution of the Cyprus issue, and always stresses that the Turkish Cypriots have a share in these resources. Of course, the breach of international law and lack of common sense are not only seen in the cases related to the TRNC. Via the so-called “Seville Map,” Ankara is trying to be restricted to a very limited area in the Mediterranean by means of the disputed maritime zones.

Turkey’s Energy and Natural Resources Minister stated that the operations of Fatih and Yavuz drilling ships will be in accordance with international rules and regulations.

The Greek Cypriot administration continues insisting on the Seville Map that proposes to implement the median line method in sharing maritime zones. However, experts of international law such as Dr. Emete Gözügüzelli argue that an equitable sharing principle must be adopted in the Mediterranean instead of equal sharing among all the coastal states since it is a semi-closed sea. According to Gözügüzelli, Articles 74(1) and 83(1) of the United Nations Convention on the Law of the Sea obliges the median line principle and stipulates that area restriction must be on an equitable basis.

The gas excavation activities unlawfully conducted by Greek Cyprus offshore Cyprus and the attempts to disregard the rights of the TRNC increased tensions in the Mediterranean region. On top of this, the Greek administration issued a warrant for the arrest of Fatih drilling ship’s crew just before Turkey launched Yavuz drilling ship, which became the final straw. Turkey harshly responded to this step and openly expressed that it would resort to all legal measures if necessary. Amid the debates on the issue, the Turkish Energy and Natural Resources Minister Fatih Dönmez stated in a speech he gave during the launching ceremony of Yavuz that the operations of Fatih and Yavuz will be in accordance with international rules and regulations. He also clearly remarked that Turkey would never back down from supporting the rights and interests of the TRNC in the Mediterranean, adding that it is an ineffective strategy to hide behind legal excuses to stop Ankara.