The belief that DAESH will face major transformations and will begin its downward spiral is very optimistic. To talk about post-Mosul DAESH scenarios, one must wait for a complete loss of the group’s territories. 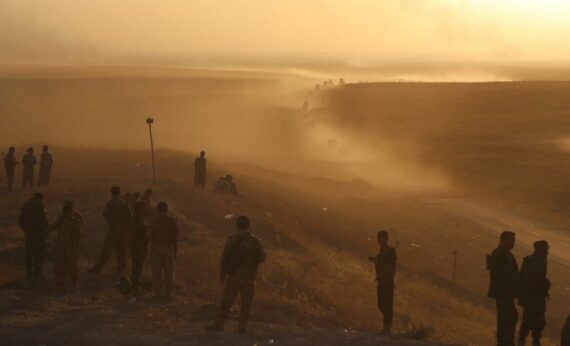 The Mosul offensive, aiming to cleanse the city of DAESH, brings to fore the question of what kind of strategy the terrorist organization is to carry out in the aftermath of losing the city.

TurkeyBy Ibrahim Efe
In 2014, Mosul had fallen to DAESH as the US-financed, trained and equipped Iraqi army left the city. Afterwards, DAESH had declared its caliphate in Mosul, and in the following months, expanded its territories, removing the border between Syria and Iraq and establishing a de facto state. However, the military campaign of the international coalition against DAESH caused the terrorist organization to suffer substantial losses. Between 2014 and 2016, DAESH lost half of its territories in Iraq, and more than one fifth in Syria.Along with territorial losses, numerous prominent military leaders of the terrorist organization were killed by US airstrikes or assassinations, while DAESH had to relinquish Dabiq, which was at the center of their messianic rhetoric, as Turkey-backed Free Syrian Army (FSA) rebels pushed for the city. More importantly, the anti-DAESH discourse become consolidated, both politically and religiously, and forced the terrorist organization onto the defensive, culling their aggressive military expansions and political power. Meanwhile, between the years 2014 and 2016, the steady flow of foreign fighters to DAESH was cut and the mobilization of their economic assets was largely limited.

All of the aforementioned factors led DAESH to employ a more limited defensive strategy, in order to protect their existing power in Mosul and Raqqa, which are their strongholds. For this reason, the Mosul offensive prompts an inquiry about DAESH’s existence and methods. Firstly, what kind of strategies and tactics await DAESH after they lose Mosul? Secondly, if the Mosul offensive is successful, is it then possible to talk about the beginning of the end for DAESH?

A Change of Strategy and A Retreat Phase

DAESH is employing what is called a gradual “mobile zone defense” strategy in Mosul. Establishing a mobile defense line on the outer rims of the city, DAESH prefers to employ hit-and-run tactics and bomb attacks. Moreover, in order to hamper the progress of the coalition forces and confuse them, the terrorist organization has resorted to one of its well-known tactics: infiltrating nearby cities and launching an assault from these cities. DAESH’s attacks in Kirkuk are an example of this tactic.

Nevertheless, DAESH either will retreat from Mosul, slowly or swiftly, or the terrorist organization will relocate a substantial number of its militants to the city center, which is on the western bank of Tigris, and will fight till the very end. While this defense strategy will be effective in the short-term, it will not be able to stop the inevitable. One of the first and most important consequences of losing Mosul might be a necessary change in the terrorist organization’s general strategy.

As the terrorist organization has a large swath of land, the most prominent advantage of DAESH is its freedom of maneuverability. Losing Mosul may unravel DAESH’s ability to maneuver, impacting the organization’s long-term aims. For this reason, DAESH’s guiding principle – to expand in order to protect its strongholds – will be modified to reflect its new defensive position: now it will attack to not become landless altogether, and will seek to expand the battle front. The first place to observe the effects of this change will be Iraq.

As a result of losing Mosul, DAESH may no longer be regarded as a quasi-state phenomenon in Iraq. While retaking the city will not completely eliminate the driving factors which allowed the existence of the terrorist organization in the first place, it might force DAESH to return to its roots, the clandestine cell structure which it embraced as the Iraqi Al-Qaeda before the Arab Spring and capturing Mosul, and form a new resistance movement in crucial cities to distract the Iraqi army. Such a change will force DAESH to restore itself to its pre-caliphate settings, especially in Iraq.

With losing Mosul, DAESH will have to decrease its military presence in Iraq and shift its militants to other regions. This means that the terrorist organization may employ asymmetric and guerrilla tactics more frequently, forcing the people living in Sunni regions into insurrection; or, they may start an unrelenting asymmetric urban warfare in the regions controlled by the Iraqi army or its allied militias. More importantly, DAESH will use every means they have to push Iraq into an ethno-sectarian disintegration process with the experience they have gained during the caliphate.

One of the possible outcomes of losing Mosul is DAESH’s organizational structure becoming disintegrated, weakening the terrorist organization and forcing it to shrink. The international campaign against DAESH did not only cause the terrorist organization to lose territories, but also limited its economic mobility and incapacitated certain figures who were vital in its operations and decision making processes. The loss of Mosul will firstly mean the end of the two-year old administrative and organizational structure of the caliphate in Iraq.

DAESH, along with developing militarily, had also developed a political, judicial and social order based on absolute authority – even if it was forcibly /– in these two years, gathering its militants around the institution of caliphate. This situation transformed Mosul into a strategic center, allowing DAESH to control its elements in the center and the periphery. In the case of Mosul’s fall, the terrorist organization’s administration will also become a challenge. DAESH’s organizational weakness in Iraq may force the terrorist organization to go underground. As this shift will cause DAESH to lose its superiority in military operations, it will also entail a strategic weakness for the terrorist organization. For DAESH’s administrative structure – currently three levels of governance dealing with central organization, inner and outer peripheries – losing Mosul might sever the internal ties necessary for maintaining a hierarchical chain of command.

DAESH is currently active in three basic types of geographical topology in regards to conflict, control and expansion: cities, suburbs and deserts. Even though it was formed within cities, it gained military and operational maneuverability by expanding to slums and vast deserts. While maintaining its existence within cities may allow DAESH to survive by employing elements such as the caliphate’s theological claims, economy, political order, security, mobilization and propaganda, staying as a force in slums and deserts will make it possible for DAESH to hold on to certain territories, even if the terrorist organization is weakened.

In the case of losing Mosul, DAESH will still maintain its status as a force in cities due to its existence in Syria. However, the terrorist organization might reorganize most of its force in slums and deserts, trying to remobilize militarily. They may especially try to occupy the desert between Tigris and Euphrates, due to the very low possibility of facing resistance from the Iraqi army. Still, as this situation will leave DAESH vulnerable to coalition airstrikes, it is not very probable.

As deserts and rural areas are insecure, DAESH will be forced to seek a new secure area in order to survive and regain its maneuverability. DAESH is employing defense and offense in three geographical regions: the innermost circle, consisting of Iraq and Syria, the inner circle, which encompasses the Middle East and Northern Africa, and the outer circle, comprised of the US, Europe and Asia. It can be understood that they have three strategic aims in the said three regions: defense in Iraq and Syria, expansion within the region and to recruit militants globally. In this sense, Iraq is at the center of DAESH’s strategic aims and future. The physical sustainability of the caliphate is only possible in Iraq due to unique opportunities present there. Losing these opportunities will be irrecoverable for DAESH, as they may not find a region or country as valuable as Iraq. Therefore, Mosul’s loss may first weaken the terrorist organization in its headquarters, Iraq, and go on to entail a loss of power in other regions.

Without the Iraqi territories, DAESH will try to consolidate its power in its new headquarters of Raqqa, reorganizing the lines of defense near the city. In this sense, DAESH may maintain its position to further its religious and political claims via the caliphate, as long as they continue to control the Syrian territories. Regardless of the territorial loss in Iraq, the Syrian territories of DAESH may allow them to retain the strategic initiative and, to a certain degree, maneuverability. However, the possibility of a military operation against Raqqa will prevent DAESH from feeling secure in the city.

The Fall of Messianic Codes

Even though losing Mosul will hurt DAESH’s political claim of statehood, it will not eliminate their messianic mindset and, on the contrary, will provide them a reason to continue their propaganda on the caliphate. DAESH desires a global caliphate. “The shade of the blessed flag will expand until it covers all eastern and western extents of the Earth, filling the world with the truth and justice of Islam and putting an end to the falsehood and tyranny of jahiliyyah [ignorance], even if America and its coalition despise such,” it said in the fifth issue of Dabiq magazine.

DAESH’s ultimate aim is to spread chaos until it evolves into a global war and cause violent disorder which will perpetuate the caliphate’s claims. Even though the caliphate’s structure as a state cannot be secured without Iraq and Syria, theological claims of the caliphate will still be employed as a tool of propaganda and political ideology. The loss of Dabiq has not caused the annihilation of the messianic discourse, even though the loss definitely has weakened it. Likewise, the loss of Mosul can harm DAESH’s claim to statehood, but may not annihilate the messianic discourse.

As a conclusion, the belief that DAESH will face major transformations and will begin its downward spiral is very optimistic. In this sense, to talk about post-Mosul DAESH scenarios, one must wait for a complete loss of the group’s territories. Seemingly, it is highly improbable this situation will be happening in the short-term.