Trump has gone so far in protecting Crown Prince Mohammad bin Salman that Senator Bob Corker stated he never thought he'd “see the day a White House would moonlight as a public relations firm for the Crown Prince of Saudi Arabia." 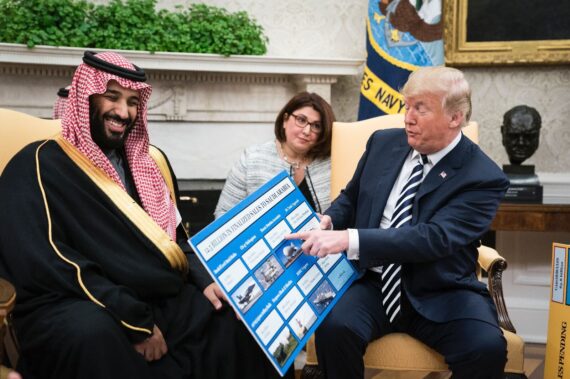 Trump has gone so far in protecting Crown Prince Mohammad bin Salman that Senator Bob Corker stated he never thought he'd “see the day a White House would moonlight as a public relations firm for the Crown Prince of Saudi Arabia." Getty Images

On November 20, U.S. President Donald Trump released a statement regarding the murder of Jamal Khashoggi. In this statement, Trump defended the Saudi Crown Prince Mohammad bin Salman (MBS) amid increasing evidences of his direct involvement in the murder. To an extent, it was so obvious that Senator Bob Corker commented on it by saying he never thought he’d “see the day a White House would moonlight as a public relations firm for the Crown Prince of Saudi Arabia.”

Moreover, Trump carried some of the Saudi official claims against Khashoggi. “Representatives of Saudi Arabia say that Jamal Khashoggi was an enemy of the state and a member of the Muslim Brotherhood,” the U.S. President said. Adding “but my decision is in no way based on that.” Trump tried to cast doubt on the Crown Prince’s role in Khashoggi’s murder by saying “maybe he did –know- and maybe he didn’t!”

In order to justify his position, the U.S. President diluted his blunt defense of MbS by referring to the vast economic and strategic interests tying his country to Saudi Arabia. However, as usual, Trump stuffed his statement with inaccurate information and false facts about Saudi Arabia to support his stance. Here are four myths he presented in his statement.

Trump has gone so far in protecting Crown Prince Mohammad bin Salman that Senator Bob Corker stated he never thought he’d “see the day a White House would moonlight as a public relations firm for the Crown Prince of Saudi Arabia.”

“The Kingdom agreed to spend and invest $450 billion in the United States. This is a record amount of money…..Of the $450 billion, $110 billion will be spent on the purchase of military equipment.”

This is probably Trump’s favorite myth on Saudi Arabia. The U.S. President keeps repeating it every time when the wisdom of his policies towards Saudi Arabia is questioned. Despite previously referring to it many times, no one knows where the number $450 billion has emerged from. It was not officially mentioned neither during Trump’s visit to the Kingdom in May 2017, nor during MbS’s visit to the U.S. in March 2018.

There were previous mentions for opportunities worth $400 billion, but those were only verbal promises over a long period of time. These promises are not expected to be materialized anytime soon if at all. In fact, according to official numbers cited by the U.S. State Department in October 2018, out of the $110 billion Trump always boost in military purchases, Saudis only spent $14.5 billion on defense contracts with US since Trump took office.

Assuming that they will continue on this rate, which is almost impossible, Saudis need at least one and half decade to fulfill their $110 billion promise to Trump. In line with this, Former CIA officer Bruce Riedel, a researcher at the Brookings Institution in Washington, said the $110 billion was fake news then and it’s still fake news today.

President Trump keeps quoting a $450 billion Saudi investment in the U.S. when there’s no such thing. Why does he always use the same figure when lying?

“It will create hundreds of thousands of jobs, tremendous economic development, and much additional wealth for the United States.”

No, the promised numbers are not going to create hundreds of thousands of jobs in the U.S. even if we assumed that they will be materialized anytime soon, which is impossible anyway. Last October, Trump claimed the – “non-existing”- $450 billion deals with Saudi Arabia will generate over a million jobs in the U.S.! He also boosted that the $110 billion military package will generate hundreds of thousands of jobs.

Last month, Reuters published a report which refutes this claim thoroughly. The report concludes that the “500,000 jobs Trump keeps bringing up is at least three to five times higher than what one could expect from the Saudi deal, given the estimates from the companies themselves, plus the most generous use of the indirect multiplier.”

Moreover, another report published by the Center for International Policy, a Washington think tank, says Saudi arms sales account for fewer than 20,000 U.S. jobs a year—less than one-twentieth of the employment boost Trump has claimed.

“If we foolishly cancel these –defense- contracts, Russia and China would be the enormous beneficiaries – and very happy to acquire all of this newfound business. It would be a wonderful gift to them directly from the United States!”

No, this isn’t true either. When it comes to its military strength, advanced weapons, and weapon systems, Riyadh heavily dependent on Washington. The vast majority of the Saudi military hardware comes from the U.S., the rest comes from EU and a tiny fraction from China and maybe from Russia.

In this sense, even if we hypothetically assume that Saudis will drop all their military deals with the U.S., China and Russia can’t be an alternative especially when it comes to the most advanced weapons. Ignoring this fact again, depending on Russia and China means that Saudis will have to transform their military in order to be able to acquire and employ military hardware from these countries.

Such a process is time consuming and probably beyond even the Kingdom’s financial capacity, it will take more than a decade of time at least, and will cost them a fortune. Even if they managed to do so, which I highly doubt, the results will not be impressive at all. Saudis will be weaker, their military strength will be reduced, and they will be much more vulnerable without a global guarantor for their security. In other words, you can sanction them and they will still come to you because they have no other options.

If the U.S. cancel their defense contracts with Saudi Arabia this will not benefit Russia and China. It’ll just reduce the Kingdom’s military capacity.

“Saudi Arabia is a great ally in our very important fight against Iran.”

The Iranian regime is not invincible, however making use of others’ mistakes and employing their wrong policies to its benefit have been one of its best features during the last decades. In this sense, if there is one reason why Iran is regionally expanding and increasing its influence, it is because of the Saudi incompetence and Riyadh’s conflicting and chaotic polices to counter Iran. Such Saudi policies increased notably since the rise of Muhammad bin Salam to power in the Kingdom.

In order to effectively counter Iran in the region, you need to achieve a few basic things: Cutting it off from the regional public support which usually boosts its stance; depriving its regional role from the needed legitimacy by standing for everything the public represents such as the Palestinian issue, Syria etc., and finally countering its economic and military activities by making sure that collective regional efforts are contributing to this aim.

However, while stressing the need to counter Iran, MbS undermined every single aspect of any useful regional strategy to fight against Tehran. Working with the advice of his mentor, the de facto ruler of UAE, Crown Prince Mohammad bin Zayed (MBZ), MbS prioritized an absurd war with the so called political Islam, imposed a blockade on Qatar, antagonized Turkey, initiated political and diplomatic crisis with traditional allies such as the Lebanese Prime Minister, King of Jordan, the Palestinian President, the Yemeni President. His reckless, dangerous policies further destabilized the region and boosted Iran’s regional position in an unprecedented way.

Moreover, by creating a deep rift in the GCC bloc, Arab bloc, and between some Arab countries and Turkey, the Saudi Crown Prince made any regional collective efforts to counter Iran almost impossible and provided Tehran with precious cards not only to unlock its regional isolation but also to be in a better position to utilize the regional contradictions to its benefit.