Demirtas's Armed Heroes in his Speech for Peace

Here is my call for Demirtas. Next time you want to make it clear that you should not be in jail for alleged linkages to the PKK, do not salute the people who started armed campaigns against the state. 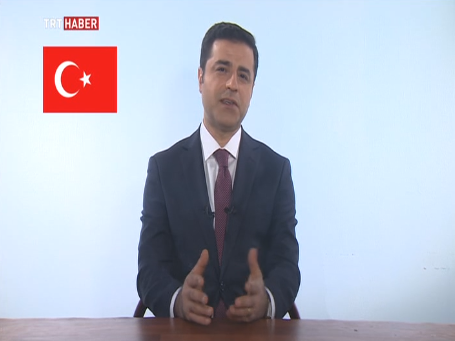 Selahattin Demirtas, the jailed ex-coleader of the HDP, gave his first speech on the national public broadcaster of Turkey on Sunday (for the text of the speech, see the link). He will give his second speech on Saturday but I believe his first speech gave enough material for some content analysis. While the speech is powerful to deliver its message to those who already support Demirtas, it was also not surprising for those who are critical of him.

Demirtas began his speech by questioning the rationale and fairness of his imprisonment, which is natural for anybody who is waiting to hear their sentence in prison. Nevertheless, it does not sound so strange to those who remember his brother Nurettin Demirtas. Nurettin Demirtas was a former leader of the very same political wing. He was also arrested and kept in prison for some time. Once released, Nurettin Demirtas fled to Iraq. He, more or less, kept his position in the movement but this time on the military wing – the PKK. He recently asked for votes for the political wing, the HDP while not bothering to change his “guerilla” uniform with a suit. In my opinion, Selahattin Demirtas would not flee in case of release but his brother’s escape in the very same situation might let many to think that the brothers might meet in the Qandil region where the PKK headquarters are located. Anyhow, what makes Demirtas’s Sunday speech more interesting and unfortunately sad for me is something else.

For a person who has a chance to show that he has no intention to support a terror organization, Demirtas picked the very wrong people as his references. Among the 15 people Demirtas cited on Sunday, one –Seyh Bedrettin- started an armed rebellion against the Ottomans in the 15th century. Another figure we heard in the speech was a semi-mystical hero, Koroglu, who rebelled against the governor of Bolu. To be fair, the Koroglu legend has a nation-wide popularity in Turkey. Nevertheless, I cannot stop but question why Demirtas kept picking the armed men to prove that he is totally peaceful and has nothing to do with violence.

Anyhow, next on the list is Sheikh Said. Demirtas paid his respect to Said in his speech but who is Said? He is the most prominent Kurdish rebellion leader of the early republican era. Said was executed once his rebellion failed but his rebellion shed the blood of many Turkish security forces, sounds familiar, huh? The next man is Seyit Rıza, a leader of another rebellion in the early republican era. He also rebelled and failed, killed and got killed. The next in the list is a trio. Deniz, Huseyin and Yusuf. They were armed, attempted to start a revolutionary guerrilla warfare against the Turkish state, were captured and executed in 1972. The next person Demirtas cited was the most troublesome for me. Mahir Cayan, another leader of a radical leftist organization, is also a documented killer who -not surprisingly- died in combat with Turkish security forces in rural Tokat.

Perhaps, the most ironic part of Demirtas’s speech was the “Yilmaz in prison” part. Yilmaz Guney was a famous actor and director. But, for God’s sake, this guy injured a man and killed another. What makes this comparison more tragic is Yilmaz Guney fled the country. Didn’t anyone tell Demirtas that his comparison of himself with Yilmaz Guney may not be a smart idea. What did Demirtas think by glorifying a man who killed a man and ran away as a fugitive?

To be fair, Demirtas also paid tribute to some unarmed men: a singer, a couple sufi slash poets, a couple prophets, and the prophet Mohammed’s grandson. Yet, nine armed men against these six is not a good ratio in a speech delivered to make one point clear: I am a man of peace. Here is my call for Demirtas. Next time you want to make it clear that you should not be in jail for alleged linkages to the PKK, do not salute the people who started armed campaigns against the state.