The Internet communication platforms continued to play vital roles in convincing the people to stay at the city centers during the following nights to deter any remnants of the putschists to stage another coup. One can only hope that the anti-coup protests and the use of digital and visual media would be an opportunity for understanding the necessity of responsible use of open Internet. 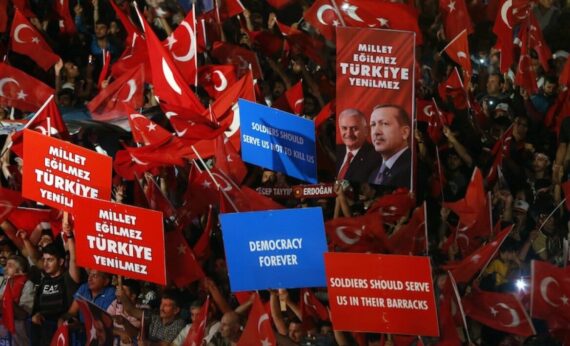 After the dramatic turn of events in the confusing hours of that thrilling and fateful night in July when an attempted coup in Turkey was thwarted, we know one thing much better than before: the power of the people using the Internet communication tools and platforms can be greater than the power of the military. Thanks to the mobilizing force of the new communication tools, the people went out in the streets in their epic struggle against the junta to face nothing less than the buzzing F-16’s and rumbling tanks firing live ammunition and bombs at the protesters. There is no doubt that the public protests across the country against the attempted coup have taken place on multiple fronts by multiple segments of the Turkish society. However, the vital role played by the Internet media in deterring the coup merits particular attention.

NewsBy Politics Today
Literally every digital social media platform from end-to-end encryption to FaceTime communication tools were put to use both by the officers in the attempted coup, by the civilians and the political forces. The latter included the President himself, who not only tweeted his anti-coup message to mobilize his eight million followers to resist the putschists but also used a popular news channel and connected through FaceTime video chat app on the iPhone, calling on all the people to stage anti-coup protests by taking to the streets and guarding critical check-points including the bridges and airports. Seeing the President alive and well through the improvised video link assured the people of the authenticity and urgency of the call. The people’s power and many Internet platforms not only stopped the participating soldiers but also deterred many other soldiers waiting their turn at the barracks. Most of the social forces posted statements on Twitter, including many MPs and political parties.Those mainstream TV channels that managed to stay on air were quick to side and sync with the digital social media platforms helping to mobilize and inform the public. Soon after the people took to the streets to stop the coup attempt, they did crush the coup. While the military tried to take control of the state-run TRT – as it had done in the previous military coups – this soon proved futile because other private mass communication channels propitiously reported about the perplexing situation, conveyed the unanimous anti-coup message of the political class and even urged the people to march in the streets to stop the coup. This has showcased the immense mobilizing role of new communication technologies such as digital mass media in crushing the attempted military coup.Make no mistake: this is not an ode to the enfolding romantic tale of social media’s liberation power. Rather it is to understand the powerful sources of massive civilian uprising against the cruel bombings and brutal attacks by the military. Digital social media disseminated the overall anti-coup attitude of the activists as well as the lay people. Indeed, such a power proved critically instrumental in mobilizing the people; showing the power of the small street activism that has eventually triggered the ongoing mass protests. For example, the feeds following hashtags such as #DarbeyeHayır (No to the Coup) and #MilletçeMeydanlardayız (The whole nation is at the maidans) were already trending for hours.

According to the data provided by Somera, the number of tweets increased by 223 percent and a total of 34.818.329 interactions was shared, reaching to a staggering of 15 million people. After 10:00 PM on July 15th, the buzz regarding the attempt started to rise, as President Erdoğan did a FaceTime on CNN Turk the first peak occurred. The next morning, the attempt failed and the second peak happened.

[The graphical analysis is produced by Somera for SETA]

As soon as the tanks blocked the roads, including the famous Bosporus bridge in Istanbul, amidst gunshots and flying F16’s, the citizens, who just happened to be there as they were returning home after work, started live-streaming through the social media platforms such as Facebook or Twitter. It is important to emphasize that the most shocking as well as mobilizing were the horrific images of tanks ruthlessly running over the civilians as well as appalling images of F-16’s bombing the Turkish Parliament building.

To be sure, the President’s video-chat and above-mentioned image sharing proved much more effective than other uses. Fearing that a possible military coup would ruin the lives and upend the country’s future prospects they tuned in to listen to the Prime Minister, Binali Yıldırım, who connected to the NTV news TV channel through a phone call confirming what was feared most, that this was indeed a coup attempt and that the public did not know the whereabouts of the PM. It was, however, the social media feeds that later carried the night with live-stream and critical information on the worsening of the situation. From the beginning of the coup attempt until 16 July midnight, there were approximately 180 tweets posted from the official Twitter account of the Prime Ministry itself. Clearly those tweets aimed to mobilize the people. The Presidency posted 35 tweets, whereas the main opposition party CHP’s official page posted 7 tweets and MHP 24 tweets.

While all the TV channels were importantly unified against the coup attempt and strongly condemned it, they were clearly out powered by the power of images and narratives presented live-stream at the social media platforms across the country. Only few minutes before the midnight, a couple of soldiers managed to enter in the offices of TRT where at gun-point they forced the anchor, Tijen Karas, to read the statement written by the junta which claimed that the government had been overthrown and that the people should return home leaving the streets to the tanks and officers for their safety.

In order to maintain the momentum of protests the day after the military coup attempt, the Internet communication platforms continued to play vital roles in convincing the people to stay at the city centers during the following nights to deter any remnants of the putschists to stage another coup. One can only hope that the anti-coup protests and the use of digital and visual media would be an opportunity for understanding the necessity of responsible use of open Internet. The latter heralds a transforming social space beyond the traditional political practice by promising to fill the destructive gap within those highly connected yet disenfranchised social forces. It may also help to stop the existential polarization in a society otherwise driven by social and political divisions.