Danish Social Democrats are adopting a far-right immigration agenda. Syrian refugees in Denmark are facing a possible threat of deportation either to Syria or to Rwanda. 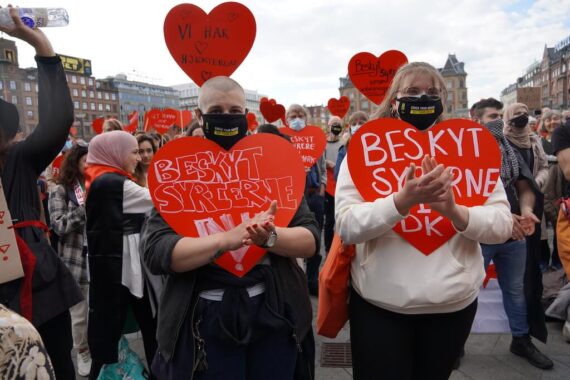 People attend the demonstration to protest against the decision of the deportation of Syrian refugees, in Copenhagen, Denmark on May 19, 2021. Photo by Davut Colak, Anadolu Images

In an annual UN-sponsored report, Denmark is named the “Happiest Country in the World” for a fourth year in a row. Since the country does not have any mountains, it is known around the world for its bike culture. Moreover, this beautiful country has 444 islands and since only 76 of them are inhabited, the Danes have lots of opportunities to go on island-hopping.

Another fun fact about Denmark is the so-called Janteloven, also known as the “Law of Jante,” which the Danish-Norwegian writer Aksel Sandemose described as the Scandinavian mentality whereby “no one is better than the other, everyone is accepted and equal.”

Yet, nothing could be further from the truth. As it turns out this unofficial Danish law is forgotten or no longer implemented in 2021 given that Denmark is not welcoming or accepting any refugees or asylum seekers. While no other European country has made a similar decision, the Danish authorities have withdrawn the asylum status of dozens of refugees from Syria.

In the same annual UN report, authors claimed that the unhappiest country in the world is Afghanistan, followed by Rwanda. Ironically, Rwanda is the country to which Denmark is aiming to send its Syrian refugees.

Recently, two Danish ministers, Minister for Development, Cooperation  and Minister for Nordic Cooperation. Flemming Møller Mortensen and Minister for Immigration and Integration Mattias Tesfaye visited Rwanda without informing the Danish media, and both refused to comment on the purpose and details of the visit or the agreement signed with the Rwandan authorities. The agreement was signed during the 4-day visit by the Danish delegation.

VIDEO: Denmark offers Syrian refugees money to return home or be put in a deportation centre

Although, at first, the ministers’ visit was not publicized in Danish media, the Foreign Ministry of Rwanda published the developments concerning the meeting between the two countries. According to DR (Denmark’s Radio – Danish Broadcasting Corporation), the Danish foreign minister confirmed the parties agreed on working more closely on asylum and migration.

In addition, DR’s Africa correspondent Søren Bendixen, stated, “The two Danish ministers refuse to speak to the Danish press. We can, therefore, not get confirmation that the two sides have discussed – or agreed – that Rwanda will in the future accept some of Denmark’s asylum seekers.”

Since the ministers refused to speak, it was first uncertain what the countries agreed upon. However, more than a week later, on May 5, 2021, the Ministry of Foreign Affairs of Denmark launched the two agreements, which took the form of a Memorandum of Understanding (MoU).

Although this MoU is a non-binding agreement, and thus gives no rise to legal obligation on the part of any party, it aims to create a mechanism of bilateral cooperation on asylum and migration issues between the two states and under current international standards. According to the articles of the agreements, Denmark’s intentions remain unclear; however, if Rwanda accepts Denmark’s asylum seekers in the future, this is worrisome.

Rwanda is already hosting more than 170,000 refugees according to a UNHCR report and a number of refugees and asylum seekers have already been evacuated from Libya to Rawanda. Only two years ago, the Rwandan police killed 11 refugees because of protests against the reduction in food aid in refugee camps. This renders the country unsafe for refugees.

In an article, Michala Clante Bendixen, chair of the Danish organization Refugees Welcome and country coordinator for the European Commission’s European Web Site on Integration, wrote, “Denmark which was once renowned as a liberal, tolerant, open-minded society with respect for human rights and a strong and humane welfare state, now became the first country in Europe to revoke residence permits for Syrian refugees.”

According to statistics by Amnesty International, approximately 900 people from Damascus were granted a temporary status in Denmark while the Danish authorities revoked the permits of 380 Syrians.

However, fortunately, there is still a silver lining: according to Bendixen, it is not possible to send the refugees to Syria anytime soon since Denmark won’t negotiate with Syria’s president Bashar al-Assad as the countries broke their diplomatic ties. This suggests that the refugees will remain in Danish refugee camps or other European countries while awaiting their deportation.

According to death toll rates, the Syrian civil war has caused the death of almost 400,000 people while 5.5 million people have been displaced – a very small number of them end up in Western Europe, and eventually an even smaller number in Denmark.

According to statistics by Amnesty International, approximately 900 people from Damascus were granted a temporary status in Denmark while the Danish authorities revoked the permits of 380 Syrians. Those sent back to refugee camps or so-called return centers are not able to work, study, or apply for any benefits accessible to Danes. Since the departure of refugees is only possible on a voluntary basis, Denmark is aiming to pressurize the refugees to self-deport.

Denmark today is a country where there is a burqa ban for Muslim women in public; whose politicians commit to a “zero asylum seeker goal”; where Muslims are believed to be disrupting social cohesion; and where an anti-ghetto policy, set under the motto “No Ghettos in 2030,” aims to combat and gentrify Muslim neighborhoods. Moreover, Denmark’s controversial plan to get rid of immigrant neighborhoods affects many citizens with non-Western backgrounds who live or own a house in these neighborhoods.

Some of the residents of these neighborhoods were only allowed two-year contracts since the government is planning to abolish nearly 40 percent of the “ghetto” area. The never-ending political and social debates surrounding Muslims makes many of these citizens feel that they don’t belong to Danish society.

Another remarkable event in the realm of Danish politics is the incident of the former Danish immigration minister Inger Støjberg who misled the parliament and is now facing impeachment for illegally ordering the separation of underage couples seeking asylum. The ex-minister said at the time that the measure was necessary to save child brides, but the rigid way she decided this left dozens of young couples who applied for asylum together separated from each other without being able to do anything to prevent it.

It is hard to guess from its current course of action, but Denmark at the moment is governed by a left-wing coalition. The Social Democrats are adopting a far-right immigration agenda and raising questions that seem hard to understand. This makes one worry about the future of refugees and Muslims in Denmark, or more precisely, if they even will have a future at all in the country since all of Denmark’s official policies target minimizing the presence of Muslims, immigrants, and refugees in the country.