There is muted optimism in Tehran and Sanaa that Biden might reverse the decision of designating the Houthis as a terrorist organization. 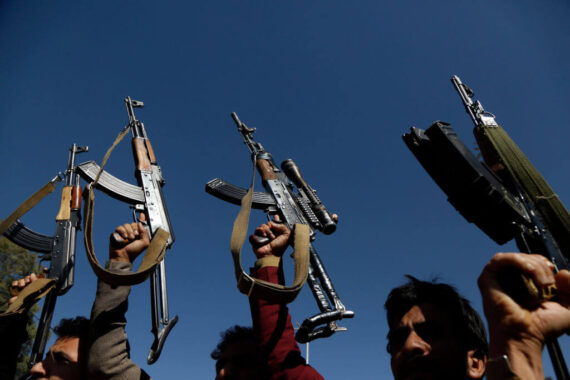 Yemeni supporters of the Houthi group hold up firearms as they protest to reject the Trump administration decision to designate the Houthis a terrorist group outside the closed US embassy on January 18, 2021 in Sana'a, Yemen. Photo by Mohammed Hamoud, Getty Images

On 10 January, then-US Secretary of State Mike Pompeo announced that the U.S. government would be designating the Houthis as a terrorist organisation drawing criticism from aid agencies and U.N. diplomats.

However, the decision also drew praise from Yemen’s internationally-recognised government and other Yemenis who have lamented the descent of their country into war following the Houthi overthrow of the democratic transition in 2014. Nevertheless, the extent to which the designation will affect the conflict, or even the peace process is unclear.

Human rights organisations and aid agencies have decried the designation, asserting that it hampers efforts to assist a population that is in the midst of one of the worst humanitarian crises in the world.

The designation complicates the process of acquisition of aid, and its subsequent delivery in territories that are currently under the control of the Houthis. This includes the capital Sanaa which continues to reel from the impact of the conflict, and the wider famine that the country is experiencing.

Moreover, aid agencies have argued that the designation of the Houthis as a terrorist organisation is ill-considered as it fails to clarify the necessary exemptions to prevent shipping companies, banks, and other commercial entities involved in the supply of emergency assistance to the country from falling foul of designation.

This therefore threatens to deter these necessary entities from engaging with Yemen, exacerbating the already dire situation.

Supporters of the Houthis gather at Dairi street to stage a protest against Saudi-led operations in Sanaa, Yemen on May 8, 2015. Photo by Mohammed Hamoud, Anadolu Images

U.N. diplomats involved in peace efforts have also lamented the designation of the Houthis as a terrorist organization, asserting that it complicates efforts to bring the parties together in what is already a complex political and military landscape. By designating the Houthis as terrorists, the argument is that they will be less inclined to engage with international efforts to bring the parties back to the table once more.

Moreover, the designation is believed to have come at the worst possible time as optimism was increasing prior to the announcement that Saudi Arabia and the Houthis were seriously considering negotiations.

However, the suggestion by aid agencies and the U.N. that the designation hampers peace efforts has been received by many as naïve, and another example of the failure of the international parties to fully grasp the nature of the conflict and understand its complexities.

The suggestion that the designation hampers peace efforts suggests that the Houthis had, or have, demonstrated a willingness to engage with the other parties in a serious peace process. While many point to the Stockholm agreement of 2018 as an example of parties coming together, the prevalent narrative in Yemen is that the Stockholm agreement was a tactical masterclass by the Houthis who at the time were facing defeat in the vital port city of Hodeida.

Had the forces of the internationally-recognised government taken it, then the prospect of retaking the capital Sanaa and restoring the government that emerged from the National Dialogue would have become possible.

An armoured vehicle is seen as government forces clash with Houthis and pro-Saleh during an operation in Taiz province, Yemen on April 6, 2017. Photo by Abdulnasser Alseddik, Anadolu Images

However, the international community’s insistence on talks at such an important crossroads in the war eliminated this possibility. Houthis fully welcomed the call for talks, using the negotiation period effectively to re-entrench themselves and regroup, before deciding to renege on the agreement that they never had any intention of abiding by in the first place.

The Houthis have made it increasingly clear that their preferred system of governance is one that recognizes the divine right of the Houthi family to rule over Yemen in a manner similar to the Imamate that was overthrown in 1962.

It is in this context that the international community has been heavily criticized by many for failing to consider Yemen’s unique history in that the Houthis’ armed overthrow of the internationally-recognized government in 2014 was not uniquely the result of circumstances specific to the time, but rather a seventh armed attempt at asserting Houthi supremacy.

Even Houthi participation in the National Dialogue alongside all of Yemen’s political parties and representatives of civil society, and their subsequent agreement to abide by its outcomes and eventual elections, did not suffice to prevent a renewed armed attempt at seizing power. Therefore, the suggestion that the designation hampers peace efforts is detached from Yemen’s more complicated recent history with peace processes generally.

Rather, many have argued that what truly hampers the peace process in Yemen is the imbalance in military power that enables the Houthis to remain entrenched in the capital, and that renders the internationally-recognized government that emerged from the democratic transition (that included the entire spectrum of Yemen’s political landscape) militarily impotent to reassert itself.

In military terms, the designation changes little. The Houthi offensive on Ma’rib continues to rage, and their grip on the capital Sanaa has tightened to the extent that Tehran has sent an ambassador to recognise the Houthi ‘administration’.

The internationally-recognised government, while welcoming of the decision to designate the Houthis as terrorists, is unable to capitalise as it remains hamstrung by its official ally UAE’s preference for the Southern Separatists who are more inclined towards secession, and as Saudi Arabia scrambles to prepare to navigate pressure to rein in military activity from the new Biden administration.

However, while the focus of the discussion over the designation has been on Yemen, the reality is that it has far more to do with Iran and scuppering prospective attempts by the new Biden administration to pursue a new deal with Iran. Biden has already made clear that he intends to pressure Saudi Arabia and the Arab coalition into ending the war.

This means that Washington is less interested in restoring the internationally-recognised government, and is more inclined to push for negotiations.

Based on the current political and military dynamics, the three main parties that will dominate the negotiating table will be the Houthis who are backed by Iran, the internationally-recognised government which is tentatively backed by Saudi Arabia, and the Southern Separatists who are backed by the UAE. In other words, any negotiations superimposed by the Biden administration will require the buy-in of Tehran, and therefore some form of dialogue between them.

Iran is likely to view negotiations in Yemen as part of the wider talks over a nuclear deal as it seeks concessions and compensation over Trump’s unilateral withdrawal from the 2015 agreement.

Therefore, it is likely that Pompeo and the deliberations behind the designation were more geared towards complicating the wider nuclear talks by putting the Biden administration in an awkward position whereby he risks undermining the US negotiating position.

Either Biden will find he will need to lift the designation to elicit greater cooperation from an Iran that feels it has been treated unfairly after agreeing to the deal in 2015 and thereby undermine the U.S. position and alienate regional allies, or Biden will dig his heels and dampen Iranian enthusiasm which threatens to prolong and complicate talks.

Although the Houthis have denounced the decision, there is muted optimism in Tehran and Sanaa that Biden might reverse the decision as part of a goodwill gesture to ensure that talks over a nuclear deal begin smoothly. The Houthis are also aware that Biden is expected to pressure Saudi Arabia to rein in its military activity, and that in such an event, their leverage at the negotiating table will be substantial irrespective of their designation.

VIDEO: Who are the Houthis in Yemen?

Sami Hamdi is the Managing Director of the International Interest, a global risk and intelligence company. He advises government institutions, global companies, and NGOs on the geopolitical dynamics of Europe and the MENA region, and has significant expertise in advising on commercial issues related to volatile political environments and their implications on market entry, market expansion, and management of stakeholders. Sami is a frequent guest on Aljazeera (Arabic and English), Sky News, TRT World, and other outlets.