Desperate for Leadership: Who will take on the Role of SPD Chairperson?

Germany does not have a political tradition where political figures are in the foreground brings some difficulties when finding a new leader for a party. Political parties are the main focus in German politics while individual political personalities are less decisive in the overall party structure. 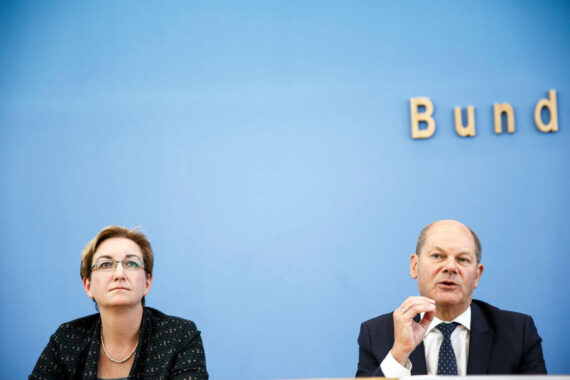 Olaf Scholz (R), German Finance Minister and Vice-Chancellor and Klara Geywitz (L), member of the Brandenburg state parliament, give a press conference to present their candidacy for the leadership of the Social Democrats (SPD) on August 21, 2019 in Berlin, Germany. Getty Images

Between 22 April 2018 and June 2019, one of Germany’s most central political parties, the Social Democratic Party of Germany (SPD), was led by Andrea Nahles, who was the first female leader in the party’s history. However, in June of this year, she announced her resignation as chairperson. Following this decision, the party now faces, once again, a leadership problem and an election to fill the role of chairperson will be held this October. Until that date, the party is being led by an interim leadership-trio. SPD members can declare their candidacy until September 1st. Candidates have the right to run alone or alongside a co-candidate. Without going into detail of the election process, it is worth mentioning that if the candidate(s) are not able to achieve an absolute majority in the first round, the election can go on to a second round of voting. Ultimately, the final results will be declared during the SPD party convention in early December.

It can be said that until now the SPD is going through an interesting but desperate path. Unfortunately, until last week, there have been no exciting candidates who have declared their interest in being the next chairperson. This is despite party members being able to declare their candidacy since 1 July. The only striking candidate until now has been Olaf Scholz, the incumbent federal minister of finance and vice chancellor of Germany. Scholz stated that he is willing to be a candidate due to the lack of interest by other prominent SPD figures. He previously ruled out being a candidate by pointing to his time constraints as a current federal minister. As expected, Scholz finally declared a female running mate to co-head the SPD, namely, a rather unknown SPD-politician and MP in Brandenburg’s state parliament, Klara Geywitz.

Scholz is considered to be a person who would bring more stability to Merkel’s shaky grand coalition, and is seen as a rather persuasive figure from an economic perspective. The chances of other candidates as the new chairperson are unlikely. But these speculations and discussions before and after the election of the SPD chairperson may be misleading. One of the SPD’s former leaders, Martin Schulz, received 100 percent of the votes when he was elected as the party’s new chairman in early 2017. Despite this overwhelming initial success, he ended his career as one of the most unsuccessful SPD leaders in its history.

If the SPD votes continue to decrease in Germany, the Greens may replace the SPD in the near future.

The SPD is currently a junior member of Chancellor Angela Merkel’s federal government coalition. In the last years, the SPD has suffered several disappointing election results. In upcoming elections in three federal states in the east of Germany, similar disastrous election results are expected. Under such deteriorating conditions, some SPD members have increasingly called for quitting their party membership unless the current coalition with Merkel’s conservative CDU/CSU continues. Current polls show that SPD’s votes range between 12 and 14 percent at the federal level while in some states the percentage is even less. It is argued that the desperate search for a new party leader has also decreased the number of potential votes. Besides that, since 2018, the SPD lost 37,000 members of its party members, from 463,723 to 426,352 members.

The current process in the SPD does not promise a successful post-election projection. It is not a secret that the SPD cannot properly articulate their differences from other leading parties such as the center-right CDU, and the Greens. If the SPD votes continue to decrease, the Greens may replace the SPD in the near future. Furthermore, the fact that Germany does not have a political tradition where political figures are in the foreground brings some difficulties when finding a new leader for a party. Political parties are the main focus in German politics while individual political personalities are less decisive in the overall party structure. This is in contrast to neighboring France, where a party leader is the most prominent figure in politics. In Germany, this creates conditions in which charismatic leaders do not easily emerge from the party’s own ranks. Not only for the SPD but for Germany’s conservatives who also face problems determining and electing new leaders able to trigger excitement and hope among the citizens. All in all, while the election of a new leader or co-leaders in the SPD is significant it will not solely determine the party’s future course.

Also Read
Has the End of Merkel’s Coalition Come in Germany?