Turkey achieved what the U.S. – who has immense diplomatic power – could not do. Through its effective diplomatic efforts, Ankara managed to gain support from other leading countries across the world on the issue of Jerusalem. 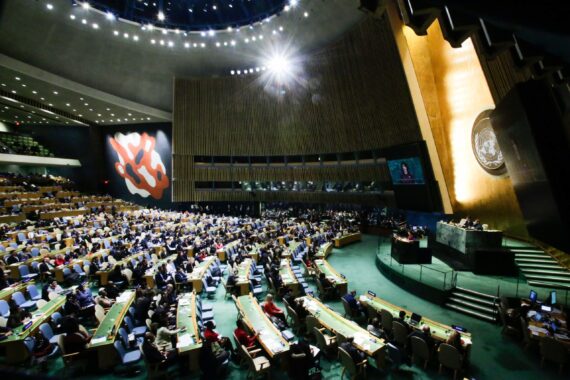 United States Ambassador to the United Nations, Nikki Haley, addresses the General Assembly prior to the vote on Jerusalem, on December 21, 2017, at UN Headquarters in New York. AFP

During the vote on a resolution proposed to the United Nations General Assembly on December 21, 2017, which condemned U.S. President Donald Trump’s decision to declare Jerusalem as the capital of Israel, we witnessed the triumph of humanity’s conscience over power in spite of all threats coming from the U.S. administration.

While an overwhelming majority of U.N. member states who attended the vote voted in favor of the resolution, dismissing Trump’s decision as null and void, only seven countries alongside the U.S. and Israel voted against the resolution. These seven states include four small countries located in the Pacific, Togo in Africa and Guatemala and Honduras in the U.S., which is a clear demonstration of the extent to which Washington and Israel have become isolated in world politics in relation to this decision.

Many comments can be made upon the proposed resolution, and a great deal have been made already. However, it is important to assess the meaning of the resolution in regards to U.S. hegemony in international politics.

The decision drawn from the U.N. General Assembly is the accomplishment of Palestine, Yemen and Turkey, who brought the issue to the agenda of the organization. Turkey exerted serious and determined diplomatic efforts in order to enable support for the draft resolution despite pressure from Washington. Ankara’s position on this issue is a tangible result of “the world is bigger than five” discourse, which has been repeatedly asserted by the Turkish President Recep Tayyip Erdogan. In other words, the Jerusalem issue became a platform in which Turkey was able to utilize its long-standing discourse of objecting to the privileged positions of certain U.N. members who hamper solutions for international conflicts – initially going against the main reason why the organization was established. Turkey addressed the conscience of the international community and achieved to impose substantial political pressure on the Trump administration by conveying the draft that was vetoed by the U.S. at the U.N. Security Council to the U.N. General Assembly, which has a relatively fairer decision-making mechanism.

Apart from Muslim countries, major components of the Western alliance such as France, Germany, Britain and Italy voted in favor of the resolution, which is reflective of the fact that Europe has been experiencing a divergence in the face of the Trump administration. By supporting the resolution, European leaders uncomfortable with Trump’s “I say I do” mentality, not only underlined their discomfort but also stood against the U.S. President’s decision to drag the Middle East into greater chaos. Unlike the United States, the European Union neighbors the Islamic world through the Middle East and North Africa, and therefore the bloc tends to refrain from taking steps that would lead to a crisis in current relations. This does not change the fact that most of the European countries side with Israel in the Arab-Israeli conflict – they just prefer to do this without causing a stir like Trump.

Aside from opting to use military and economic power, another fact revealed by the U.N. General Assembly’s Jerusalem decision is that diplomacy can be a very effective tool in international relations. Although the U.S. – the greatest military and economic power in the world – tried to intimidate U.N. members, it only received support from seven countries. This very fact demonstrates the extent to which diplomacy can be influential against power-bullying.

Many Christian countries supported the resolution much more than a number of Muslim countries. This illustrates that forming various alliances within foreign policy is a more functional approach in comparison to a standard generalized point of view. In this framework, Turkey achieved what the U.S. – who has immense diplomatic power – could not do. Through its effective diplomatic efforts, Ankara managed to gain support from other leading countries across the world on the issue of Jerusalem, thus leaving Washington to squabble in a substantial political defeat.

It is reasonable to assert that as long as Washington maintains its arrogance and as long as other countries continue to stand against this attitude, the Jerusalem issue may possibly bring the end of U.S. hegemony. If Muslim countries end the conflicts between them and join forces around the issue of Jerusalem, they can stabilize U.S. military and economic power, and if they form alliances against the arrogant policies of Washington, they will suffice to bring the end of American hegemony in world politics and will find themselves respectful positions in the new system.