The False Promise of the United Nations

In order to start a new initiative for UN reform, the UNGA should question President Trump’s speech as it reveals the main issues with the UN, and then, should refer to President Erdogan’s statements as a baseline to start thinking about its structure and possible reforms. 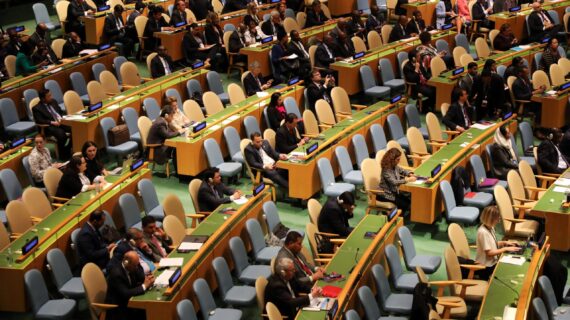 Delegates listen to French President Emmanuel Macron (unseen) as he adresses the UN General Assembly at the UN headquarters on September 25, 2018, in New York. Getty Images

We witnessed the fall of multilateral discourse and ignorance towards the fault lines of world politics. The problem here is not solely related to the organizational structure of the UN per se. Instead, the problems lie at the very nature of international politics, which have been under fundamental transformation particularly since the end of the Cold War.

The UN was initially established to construct an international society mobilized around the idea of universal values to protect shared humanitarian norms and prevent conflicts. “The UN was not created to take humanity to heaven but to save it from hell;” the former United Nations Secretary-General Dag Hammarskjold once said. Since the Cold War, however, the UN has not been successful in delivering peace, stability, and security in the international system. More importantly, the UN as a universal supranational organization has been ineffective and unproductive in dealing with global security issues.

At the very end of the Cold War, Francis Fukuyama put forth the argument that the universalization of Western liberal democracy might be the final form of human government surpassing socialist views. He underlined that there was no other alternative socio-political system against the western countries that can console their superiority in the international order. Therefore, non-western societies were obliged to move toward the West and eventually embrace the western way of thinking.

However, Fukuyama’s the end of history thesis failed to predict the very nature of international politics, particularly its changing dynamics. The continuation of ethnic, religious, and sectarian conflicts across the world, the changing dynamics of international terrorism and the emergence of various global terrorist groups such as DAESH proved that the history did not end, and the west is not the only direction that the non-western societies have to look up to.

The Trump administration’s anti-globalist, nationalist, protectionist and well-established white supremacist rhetoric provokes us to rethink about the UN. The U.S. at the end of World War II created the UN, but today the U.S. itself is destroying it.

The problems are not only related to the U.S. perception of international politics and the UN’s role. The other powerful member-states are also responsible for the decreasing role of the UN in creating a more stable position in international politics. Russia, China, the U.K., and France are the same when it comes to building a shared sense regarding the role of the UN. More importantly, these states are responsible for creating instabilities. The Syrian Civil War is a textbook example to see the inefficiencies of the UN.

Even though the Assad regime has been disregarding principles of the UN Charter by using chemical weapons, barrel bombs and other internationally banned weapons against civilians since the beginning of the uprising in the country, the UN Security Council could not come up with any solution. The structure of the UNSC is influenced by the priorities of the five countries in regards to the Syrian Civil War in particular, the Middle East, and the rest of the world in general. As President Erdogan repeatedly underlines, the five permanent member states of the Security Council hold the will of the oppressed people in Syria.

The current organizational structure of the UN and the power-sharing mechanism do not represent an accurate geopolitical picture of international politics. The rise of new power centers and emerging regional actors should also be included in the decision making processes at the UN. There are no Muslim countries represented in the decision-making process.

The UN General Assembly recently condemned the U.S. decision on Al-Quds, but the veto power of the U.S. in the Security Council prevents the international society to rage against the pro-Israeli decision. Therefore, it is possible to argue that the existing UN structure will not only solve the crisis but also deepen the crisis towards a more radical line.

As can be seen in the case of the Syrian Civil War, the UN cannot even act timely to prevent a humanitarian disaster, and it is not effective in protecting human life from state violence. As President Erdogan underlined in his speech at the UNGA, the UN could only provide Turkey with 700 million USD to improve the conditions of refugees that Turkey is currently hosting.

In order to start a new initiative for UN reform, the UNGA should question President Trump’s speech as it reveals the main issues with the UN, and then, should refer to President Erdogan’s statements as a baseline to start thinking about its structure and possible reforms.

Also Read
What Role Can Turkey Play Between Russia and Ukraine in Antalya?