Prabowo asserted that if he does not defeat incumbent president Jokowi in the upcoming April 2019 elections, the nation will face a serious peril to the extent of being extinct. 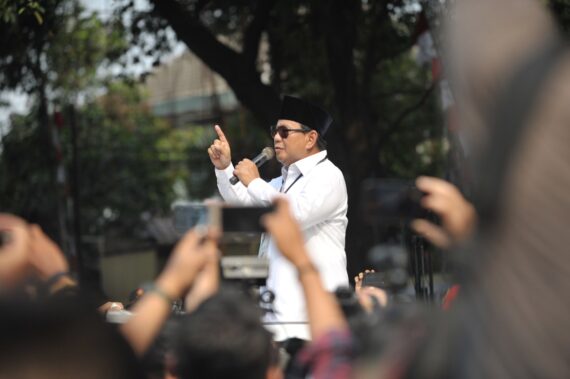 Indonesia, the most populous Muslim nation, which is also weighed as the third largest democracy in the world, is preparing for upcoming presidential and parliamentary elections to be held in April 2019. Though there are numerous nationalist and Islamic parties, two presidential candidates are backed by two political camps based on mutual understandings and interests.

The first candidate is incumbent president, Joko Widodo, mostly referred to as Jokowi, and the second candidate is Prabowo Subianto, a former lieutenant-general, the chairman of the Great Indonesian Party (Gerindra).

Having been recognized as a down-to-earth figure who has accomplished improvement, Jokowi increasingly gathered overwhelming support since his early days as Mayor of Solo, East Java, following his occupation as the governor of Jakarta, and was later linked into becoming president under the Indonesian Democratic Party of Struggle (PDI-P).

Due to his relentless projection for equal progress and the welfare of hundreds of diverse ethnicities carried on through his style of simplicity and sincerity, Jokowi was trusted once more with another chance to lead the nation.

Meanwhile, Prabowo Subianto, a former general and son-in-law of former ‘dictator’ Suharto, who lost the previous election, admitted to displaying a more ambitious strategy by using religious and ethnicity programs formed into the politics of fear of the psychologically victimized groups such as Muslim orthodox groups and Islamist and nationalist parties.

Though one may assume that the upcoming presidential election is merely a democratic routine, which occurs every five years, others deem it as an apocalyptic manner as to whether the unity of the nation will exist or wane.

Hence, the ones familiar with the nation’s political environment are not surprised as the political discourse is being structured around the existentiality of the state. This discourse became more apparent in the latest speech of Prabowo during his campaign meeting in Bogor, West Java.

Prabowo asserted that if he does not defeat incumbent president Jokowi in the upcoming April 2019 elections, the nation will face a serious peril to the extent of being extinct. One may regard this assertion as Prabowo acting ambitious in order to win the elections and that he is playing his last card. The politics of fear that he brought about is signing the level of frustration he reflected.

Prabowo asserted that if he does not defeat incumbent president Jokowi in the upcoming April 2019 elections, the nation will face a serious peril to the extent of being extinct.

However, Prabowo’s discourse should be earnestly taken into consideration with the developments in national politics in the recent years, in particular, such as one of the largest demonstrations that occurred in Jakarta, in November.

The eye-opening demonstration for people who are alien to Indonesian politics was conducted as an anniversary of momentum demonstration aimed to pull down the blasphemes governor, Basuki Tjahaja Purmana (Ahok), an ethnic Chinese Christian, in 2016.

Unlike previous demonstrations that lacked a somewhat clear objective, on this occussaion the masses dubbed the rally as Reuni 212, which was soon twisted as ‘change the president’ (GantiPresiden, 2019) campaign – another political slogan fired by Prabowo supporters where he was found galloping it within his political advantages.

Prabowo does not seem to be happy with the current political situation in the country. However, quite interestingly, he is pointing his finger not only to his rival candidate but also to the political elites, who displayed dismissive roles in the post-Suharto era, since May 1998.

His disappointment towards the political elites has been observed throughout decades. It is argued that Prabowo is referring to a small number of elites who have controlled the major sources of the country.

If this is so, then it should be rightfully asked whether the aim of his accusation was Jokowi or not. It is obviously asserted that president Jokowi is not counted among this type of political elite.

Since the fall of the Suharto regime, the reform era has not given fruits in terms of sustainable institutional changes. Rather, the status quo has been maintained through the successful efforts of the elites. Even political parties such as the Democrat Party (DP) and the Prosperous Justice Party (Partai Keadilan Sejahtera-PKS) gradually eroded the hopes of the masses in all corners of the country due to their own irrelevant policies and decisions.

While Prabowo directly accuses and puts all political elites in the same bucket of mistakes, he does not clarify how he will rebuild the failed institutions under the hands of elected leaders. This is because, as he asserts, the latter have dismissed the mandate given by the electorate and led the country in the wrong direction.

Beyond this, there is quite a contradictory perspective in Prabowo’s assertions, which include the peonage role, supposed to be played by influential Islamic figures. Hence, it is quite questionable whether this discourse is still effective or not, since the incumbent president Jokowi embraced Ma’ruf Amin as a running mate – an infamously charismatic and moderate figure.

Since the fall of the Suharto regime in Indonesia, the reform era has not given fruits in terms of sustainable institutional changes. Rather, the status quo has been maintained through the successful efforts of the elites.

Ma’ruf Amin is trusted as the general chairman of the Association of Religious Scholars of
Indonesia (Majelis Ulama Indonesia-MUI) and the head of the board of advisers of Nahdlatul
Ulama (NU) to get into the race of the coming election together.

A fact that seems to be forgotten by the majority of the people is that Prabowo played a crucial role with Megawati Sukarnoputri, head of the PDI-P, to have picked Jokowi as the candidate to rule the capital city in 2012.

And while Jokowi then chose Ahok as his deputy, Prabowo did not show any hesitation to support them. Hence, Prabowo surprisingly switched and became an ally with some groups known to be against the non-Muslim governor in Jakarta.

While all these events are occurring in the opposition bloc led by Prabowo, president Jokowi and his coalition allies do not prefer to fight back, at least until now as observed. Jokowi seems to prefer democratic and diplomatic approaches without undermining the foundation of the current civil order.

Also Read
Man of Contradictions: Joko Widodo and the Struggle to Remake Indonesia