Despite all these comparisons, it is commonly believed that the Yellow Vests constitute an unprecedented phenomenon. And currently, Macron’s power is in decline although he was initially believed to save France and Europe and was seen as an antidote to the populism virus by the Western elite. 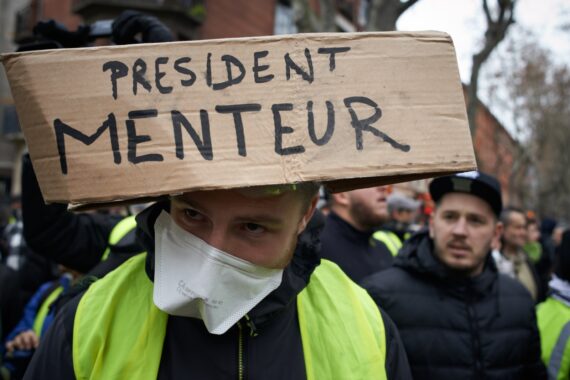 The Yellow Vests – the first group continuing their protests even on Christmas Eve, are now preparing for the New Year – even though their numbers have decreased despite French President Emmanuel Macron’s step back and the terror attack in Strasbourg. Having claimed Champs Elysee, the renowned avenue in Paris for six weeks now, the Yellow Vests will also be there for New Year’s Eve. They have promised that they will wear their vests but spend the night in an air of festivity in the avenue, which formerly witnessed violent protests.

Resorting to historical references in almost every issue, the French are now endeavoring to make an in-depth analysis of the Yellow Vest movement with their historians, intellectuals, sociologists and political scientists – although they brushed the phenomenon off during the first stages of the incident. Some, including the Interior Minister Christophe Castaner, refer to the incidents in France between the two great wars. Even in the second protest, Castaner made a reference to 6 February, 1934. It is highly dubious if these two share similarities. The Cartel of the Left was a governmental group composed by the alliance of the Socialist Party, Radical-Socialist party, Independent Radicals and Republican-Socialist Party. The country was shaken by a scandal of corruption and bribery centering on a Russian Jewish broker supported by the parliamentarians. The economic crisis was deepened while the parliamentary regime was in a profound crisis. So, people gathered in the Place de la Concorde on February 6, 1932, and started marching towards the Prime Ministry in Palais Bourbon. The state buildings were under a serious threat. The police aimed and shot the demonstrators, 15 people were killed while 1435 were injured. The demonstrations, which were dominated by the far-right, fascist groups and monarchists against the parliamentary regime, went down into history as a “far-right movement,” but modern historians agree that this is not an accurate description by reminding that leftist and communist groups were also among the protesters.

Another comparison has been made with the yellow union movement. Emerging during the early 1900s, but appearing on the political scene throughout the 20th century, this movement was claimed by far-right groups who were against going on strike and fighting against bosses. They defined themselves as a local movement against Marxist unions. But this comparison was never given much credit since no similarity is apparent except for the color used.

When a social crisis emerges in France, it is mostly referred to the 1995 strikes in France, the largest crisis experienced in the country since 1968. The protesters demonstrated against the reform package on public employees and retirement for days and went on strike, making the government take back every step it previously took. But unions were the main actors of that movement. In the case of Yellow Vests, no union is involved; they have never used a mediator. There is only one similarity, the support the then President Jacques Chirac enjoyed declined as soon as he took office – just as Macron’s case today.

Some historians likened the Yellow Vests to the 1968 incidents, to which many objected. 68 was surely a youth movement, but there is no outstanding generation in Yellow Vests. Also, 68 was against authority whereas the Yellow Vests’ main opposition is not against authority. They are essentially against Macron’s practices and the system in general. The unions were apparent in 68, and when Pompidou was trying to make an agreement, he particularly paid attention to the words of the CGT’s bosses.

France has witnessed many social protests in the past. How different – if so – are the Yellow Vests protests from previous experiences?

Besides, some groups compared the Yellow Vests with the Poujadism movement led by small business owners and artisans during the 1950s. Even Macron argues that the Yellow Vests are modern poujadists. It was a movement of the self-employed who felt downtrodden and ignored and reacted against the heavy tax load. It was ignited by a tradesman named Poujad, turned into a political movement and was positioned in the French right-wing. It was an anti-Semitic and anti-Republican movement. On the other hand, the Yellow Vests cannot be argued to be against the Republic, and there has only been a single anti-Semitist incident throughout the protests. So, this is not an accurate classification since the whole movement cannot be categorized as anti-Semitic by referring to only a single event.

Due to their populism, the Yellow Vests are also likened to Boulangism, which was prominent between 1885 and 1889. Boulangism appeared in a period when the conditions were very convenient for populism, great disturbances were seen in different segments of society, and various demands could not be addressed. The War Minister Georges Ernest Boulanger was a nationalist and a German opponent who enjoyed the support of the left, far-left and right-wing monarchists. Also compared with the Front National led by Marine Le Pen, the Boulanger movement united people from all segments complaining about the situation of the country. Boulangism’s discourse defended direct democracy and strong state while it was also nationalist and anti-Semitic. Despite being supported by different segments such as students, anti-racists and ambulance workers, the Yellow Vests do not share many similarities with this movement, either.

Macron’s power is in decline although he was initially believed to save France and Europe and was seen as an antidote to the populism virus by the Western elite.

The Yellow Vests are mostly compared with the sans-culottes of 1789, but sans-culottes did not correspond to a specific economic class despite mostly comprising mid-level tradesmen. Also, they started rioting in Paris whereas the Yellow Vests do mostly comprise those living in rural spaces or peripheries. They were very influential in the period known as the years of terror in France as they killed aristocrats, seized the properties of the rich and ravaged the streets.

Despite all these comparisons, it is commonly believed that the Yellow Vests constitute an unprecedented phenomenon. And currently, Macron’s power is in decline although he was initially believed to save France and Europe and was seen as an antidote to the populism virus by the Western elite.