Populism: The New Wave of "Magic" in Europe?

The country that elected Macron for a revolution is now pushing him to the edge for another revolution. 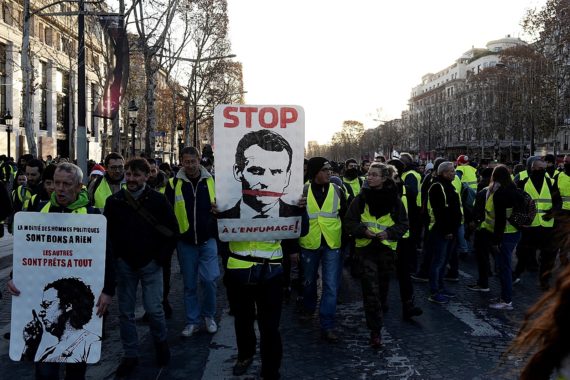 Paris is burning with protests that started in reaction to the government’s announcement of a new tax on diesel fuel. As many analysts have already pointed out, the protests did not emerge and escalate to violent riots exclusively for this sole reason. Hence, we should not do the same mistake that Europeans do on the Middle East: “It’s all about oil.” This does not mean that the price hike did not play a role though, it really did trigger the protests. However, the latent concept we are looking for here is not oil. The word we are looking for, and many have long found it, is populism.

Populism has been in the center of political debates from the U.S. to Europe particularly since Trump’s electoral victory in 2016. The elections in Europe since then have only exacerbated this debate. This is an interesting development given that the West is well-known for its well established, institutionalized political scene. In Europe, for many long years, politics was not about the masses or the charismatic leaders but mostly about the faceless institutions, technical procedures, and political correctness. Populism, on the other hand, is the wave of politics famous for defaming all three, in short – “the establishment.” It is the movement that gives hope to people in a way that their voice, for the first time in a long time, will be heard. It is the message to the masses, which claims that the time has come to take revenge from the corrupt elites by stripping them off their privileges and giving the “real” citizens what they deserve.

Populists want their states to be sovereign, which implies restraining the hyper globalization of the flow of finances out of and people into their country. Now, the West is facing with a trilemma of sovereignty, hyper-inflation, and democracy.

Populists want the citizens to have their due, not the immigrants in the case of right-wing populism nor the rich in the case of left-wing populism. They want their states to be sovereign, which implies restraining the hyper globalization of the flow of finances out of and people into their country. The demand for sovereignty is also related to the call for “real” democracy, not the one hijacked by “corrupt elites.” In other words, as suggested by Dani Rodrik, a Turkish economist and scholar of political economy at Harvard, this trilemma of sovereignty, hyper-inflation, and democracy is the problem the West is facing. In some places, the problem to solve this problem led to the election of new faces to the highest spots with the hopes of bringing a magical solution to the deepest problems their countries are in.

In fact, Macron was just one of these examples who came to office with popular vote and with high, if not magical, expectations. In some sense, Macron’s election was revolutionary in the eyes of the many. After all, he was not from “the establishment.” Nevertheless, revolution devours its own children, to nobody’s surprise in France. When people realized that there was no magic in real life, populism turned violent. The country that elected Macron for a revolution is now pushing him to the edge for another revolution. Around 1000 arrested, over 100 injured in the ongoing events in France, and still counting. This looks like Macron’s hopes have faded away quick.

The country that elected Macron for a revolution is now pushing him to the edge for another revolution.

While the rise of populism has led to crucial changes in world politics, Turkey seems to be a country among the least affected from the populist surge. This is partly because Turkey has been giving its own fight with “the establishment” over the past 17 years. And this fight is not unchecked and left to the masses, but is carried out by the new political elites of the ruling AK Party. After all these economic hardships, security threats, millions of the immigrants having flooded into the country in the past few years, Turkey has still not fallen victim to populism. In fact, the ruling party still stands behind the Syrian immigrants despite the populist discourses of the CHP and Iyi Party. The AK Party again resisted the opposition parties by not flexing the budget and it chose to keep the social security system intact. Hence, unlike many observers’ claims, Turkey and its ruling party is still not following the populist surge in Europe or elsewhere.