Considering the US interventions in Afghanistan and Iraq along with Russia’s annexation of Crimea and half of Georgia, it is possible to foresee that the era of division is over and that actors will move towards expansion. 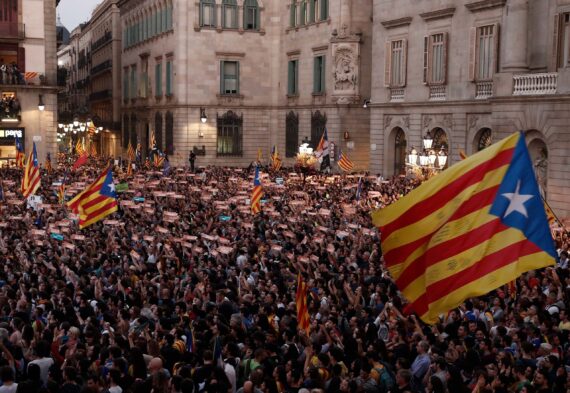 People celebrate after the approval of the unilateral declaration of independence during a plenary session at Catalan Assembly, at Sant Jaume square in Barcelona, northeastern Spain, 27 October 2017. Anadolu Agency

The first actors in the world were city states, smaller kingdoms or principalities and these structures which were present in almost all continents had similar qualities. Throughout history, some of these actors have become more powerful and began to expand into neighboring actors through invasions, wars and agreements. All great civilizations and empires, notably Maya, India, China, Macedonia, Rome and the Ottomans, have histories that could verify this hypothesis. It is possible to observe a similar situation in the formation of the USSR and even the Eastern Bloc.

The age of empire was followed by years of dissolution which were caused by the loss of central power. The emergence of feudalism following the downfall of the Roman Empire, empires being replaced by nation-states, the emergence of new states after the USSR’s dissolution, and the division of Yugoslavia and Czechoslovakia following the dissolution of the Eastern Bloc are all examples of the said fragmentation.

This situation could be deemed analogous to living cells, which survive through merging with each other or going through cellular division. However, while this is a natural process in the world of organisms, there are conflicts, transitions and systemic transformations in the world of states.

Power vacuum in the system

There is not yet a unanimous definition of the contemporary international system. In other words, developments occurring after the Cold War do not have indicators that signify whether this “cellular division” is over.

Considering the US interventions in Afghanistan and Iraq along with Russia’s annexation of Crimea and half of Georgia, it is possible to foresee that the era of division is over and that actors will move towards expansion. This, of course, will be through invasions, wars or coercion. Meanwhile, the “freedom” offered by the US and the “stability” foreseen by Russia has not led to a particular systemic transformation which will allow states to facilitate growth.

Currently, growth is only limited to the uplifting of a country, group or region, to a certain extent, in order for it to be able to cooperate with greater powers. This situation escalates the competition between actors which desire expansion and believe they have the capacity to realize it. Yet, none of these competing actors have the capacity to determine the fate of a region by itself. Therefore, major actors such as the US, Russia and China use force in predetermined priority regions. However, this force is not enough to prevent these rival actors from infiltrating these regions. This being the case, tendencies to disintegrate and divide stay relevant. Thus, as the powerhouses lose their abilities to determine a system, centrifugal tendencies escalate.

None of the competing actors have the capacity to determine the fate of a region by itself. Therefore, major actors such as the US, Russia and China use force in predetermined priority regions.

It is possible to observe the most glaring instances of these centrifugal tendencies in Europe. While Ukraine’s efforts to disengage from Russia, and the UK’s withdrawal from the EU through Brexit can seem as two different instances of separation, their reasoning does not differ from other disintegration inclinations.

Other examples of secession are not from integrated superstructures, but are instances of a break from existing states. For example, the Catalonia and Bask autonomous regions in Spain, Wallonia in Belgium, Quebec in Canada, Scotland and Wales in the UK, Trentino-Alto Adige in Northern Italy and four cities with a high Roma population in Hungary are some of the examples. Northern Iraq could also be listed as another instance of secession.

The aforementioned examples were either autonomous at one point in history or were granted autonomy with constitutional provisions. Yet, some of them lost their autonomy only to regain it later. For instance, the Kurdistan Regional Government had gained its autonomy in 1970, then lost it only to regain this status with the new Iraqi Constitution ratified in 2005. Similarly, while Catalonia became autonomous in 1931, this was revoked during the Spanish Civil War and Franco’s reign, and the province regained its status in 1979.

In almost all of the listed examples, the decision to declare independence was taken either by the regional parliaments or, as was illustrated by the cases of Catalonia and Northern Iraq, was a result of a referendum. While some shelved the decision of independent, others used it to negotiate with their central government.

Another commonality among these regions that pursue separation is that while they focus their independence reasoning on economic conditions, they fail to clarify the kind of economic system they will survive with. Generally, those that desire independence are “rich.” These wealthy regions claim that they carry the financial burden and that they do not receive services or have a budget in proportion with what they are taxed. Therefore, the economic reason of secession is usually expressed as “jettisoning.” Nevertheless, it is not clear how they are to remain wealthy after any potential separation. The singular example of this situation is the division of the Czechs and Slovaks as both sides willingly parted their ways. Generally, central governments take every precaution against those want to secede forcibly, preventing seceding regions from maintaining their wealth. This is merely the reason why the Catalans took a step back and why there is a possibility of a new civil war in Iraq.

Another common point in the separation process is the sociological motivations of those that want to leave. They first express that they see themselves different from the primary state and assert this difference through the utilization of a “different language.” Having a different language implies not only a different culture but further implies a different ethnic identity. In this respect therefore, the issue of independence is all about people of the ‘same ethnicity or race’ forming miniscule states.

If then these miniscule states surround themselves with ramparts in order to protect themselves from neighboring states, which would be likely to occur, then this will become feudalism all over again. Moreover, it is possible to foresee that this process could have larger implications by creating a domino effect.

This form of nationalism, which gradually progressed due to linguistic differences, has now entered an “as long as it is mine” phase. However, it should be reminded that there was a preceding phase which led to this point. This phase occurred with the spread of a consensus of the “other.” 9/11, Al Qaeda, Daesh and the issue of Syrian immigrants have consolidated nationalistic tendencies in vast territories, ranging from Northern Iraq to Central Asia, from Gulf countries to the US and from Europe to Africa, against the “other.” As was the case in the era of rising nationalistic movements, politics began to target the “internal others” right after it was over with the “external others.” For example, the separatist Catalans did not want to see Muslims first, then Syrians, then Roma people and lastly the Spanish.

While major actors in the international realm have a unanimous stance against the “external other,” it is difficult to claim that there is a similar consensus in regards to the “internal other.” It should not be forgotten that these fragments of states could only survive if they are acknowledged and recognized by prominent actors of the international system. If the principality of Andorra, which has a population of 70,000 is able to survive as a country right in the middle of Europe, it is not due to its own success.

It can be argued that separatists are aware of this reality as they are attempting to converge or unify with other actors.

It can be argued that separatists are aware of this reality as they are attempting to converge or unify with other actors. For instance, the administrators leading the Catalan and Scottish separatists announced that they want to become EU members right after secession. Those in Italy want to unify with Austria, while Walloons in Belgium and Roma people in Hungary want to unify with France and Romania, respectively.

Even though tendencies to separate are on the rise, it is hard to claim that the political conjuncture will enable these tendencies as no great power can guarantee that this process will not affect them. Only when, and if, there is a power vacuum in the system, a few of these new miniscule actors may be recognized. Meanwhile, these miniscule states might also be absorbed by larger actors while trying to enjoy their independence. Meanwhile, when there is a power vacuum in the system, the tendency to secede will become widespread and it will be possible to talk about a new “dark age.”