The End of Eurocentrism?

Turkey is challenging the Eurocentric mentality, trying to reverse the defeat of the Islamic world that occurred over the two centuries. More than an obligation, it’s a necessity. To persevere or to cease to exist, this is the struggle. 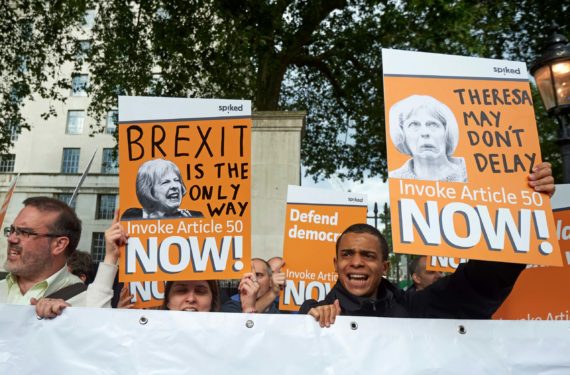 Pro-Brexit supporters holds up placards as they demonstrate outside Downing street in central London on July 13, 2016, on the day new British Prime Minister Theresa May takes over at number 10. Anadolu Agency

Just like victory, the road to defeat begins with the mind. Similarly, defeat also relies on a spiritual vision along with material dimensions. It’s about a particularity which is equally material and spiritual.

Defeat begins when it’s realized. Remembering defeats is painful and troubling. Both pains and troubles are actually opportunities; they require one to exert themselves. These are the basic tenets of not giving up.

Muslims of the modern era are subjected to defeats. I mean us, our parents, and their ancestors.

This defeat definitely has certain material aspects. When the Western colonization system started to take over the world, Muslims started to lose. We lost at first, then our losses transformed into defeats. We forgot our losses and forgot that we were defeated. Our defeat became normalized.

The Muslim world has paid a grievous price throughout the last two centuries. Those who made Muslims pay were those who established the Western colonization system. Western expansionism was not only military; this expansionism permeated almost all aspects of life, including politics, law, culture, morality, economy and everyday life.

Have the tables turned?

Not completely. However, it started to revolve. So, what happened? Two things, actually. First, global politics established on Western expansionism began to lose power. Those behind this expansionism believe that they are losing. Concerns reflected occasionally by Western intellectuals have started to affect policy makers, strategists and media gurus.

Another thing also occurred; the Muslim world started to gain a powerful and authentic voice. This voice was a call for awakening, orientation and recovery. This is important not only for offering new directives to global politics, but also for reminding us that defeat is not fate.

Weren’t there similar developments in the first half of the past century? No, there weren’t. Of course, there were theses about the “West’s collapse,” that Western modernity will bring the end of humanity. These were being advocated by Western intellectuals themselves. Meanwhile, there were upheavals in countries that were ravaged by Western colonization and “decolonization movements” were taking place. Yet, we should be aware of the prominent differences between then and now.

First of all, there was a tremendous distance between the West and “the rest,” greater than today. Secondly, elites of non-Western countries were hopeful of the West and believed that they would become like Western countries if they imitated hard enough. Thirdly, the decolonization process was caused by shifts in intra-Western balances and its own dynamics were irrelevant. Moreover, despite all the conflicts and wars, it was believed that the Western nation-state system would be maintained. Even if there was a disruption, they were sure that the invisible hand of the international system would intervene. The US has begun to play this role after 1945.

However, today, the US neither has the moral superiority nor the material capacity to maintain this role. This was reflected by US decision makers, who advocated a foreign policy of isolationism. Almost eighty years ago, the US adopted an aggressive foreign policy to in order to prevent Europe from dissolving and in order to maintain the political unity of the West. The US established a system and this system functioned for a considerable amount of time. However, the system is crumbling today and the US doesn’t have the opportunity for a new intervention.

The US is trying to reestablish the now deteriorating order it had imposed on the Pacific. It has not yet succeeded in doing so. Meanwhile, China and its proxy North Korea have become the new “other” of the US in this new era.

Is the European nation-state system dissolving?

Hardening global politics occurs with the transition from “nationalist notions” to “ethnic awareness.” This artificial but effective awareness offers dissolution, not union. Right after the end of the Cold War, Eric Hobsbawm had asserted that nationalism and ethnicity were radically different, that nationalism relied on a political program while ethnicity lacked such a program. It was the case during those days.

If we were to talk with Catalans today, they would mention a political program which relies on ethnicity and would provide “rational” reasons for their actions. We’re talking about a new political program which is trying to replace the nationalistic notions that created contemporary Europe. This is all about a process of separation and politicization of groups like the Catalans, Basques, Bretons, Scots, the Flemish, Walloons, Padanians, Normans and Bavarians and their separation movements.

For many years, the West has used separatist movements as a means for influence and intervention in the Middle East and exerted itself to pave the way for these movements. In this respect, it has also supported separatist movements that employ terror for their own ends. The support provided to the PKK in Turkey was of such a kind.

Since the 2000s, support to separatist movements in the region and to the dissolution of Syria and Iraq was deemed as a means to be influential in the Middle East. Yet, all of these led to the day-by-day hardening of global politics and evolved international rivalries into hateful feelings and hostilities.

Instead of addressing this dissolution process with new and inclusive policies, the West is trying to recreate a vulgar form of the Eurocentric ideology which was formulated in the 19th century. The West is openly advocating Eurocentrism during a time we’re witnessing the defeat of Eurocentric politics. They are disregarding non-European nations, deeming these nations unworthy. The idea of the superiority of the West is being advocated. It is not difficult to state that the colonial ideology, which belongs to the era of empire, has systematically enshrined itself into the Western system. This is reflected in the fact that Western states still assume that they have a responsibility to “civilize” Asian and African nations. While this is the case, the West lacks the power and opportunity to realize this as they are ravaged by emerging internal issues.

Therefore, those who are accusing Turkey of turning its back and even becoming hostile to the West should first criticize themselves. Turkey is challenging the Eurocentric mentality, trying to reverse the defeat of the Islamic world that occurred over the two centuries. More than an obligation, it’s a necessity. To persevere or to cease to exist, this is the struggle.

Fahrettin Altun is a Professor at Ibn Haldun University and the General Coordinator of SETA Foundation, Istanbul. Altun is the Editor-in-Chief of the monthly political magazine Kriter, the author of “Modernleşme Kuramı: Eleştirel Bir Giriş" and the co-author of “Freedom Press in Turkey.” Currently a columnist for Daily Sabah and Sabah newspapers, he is also a weekly analyst on “Enine Boyuna” and “Dışa Bakış” – two television series aired live on TRT 1 and TRT Haber respectively. Altun’s research areas include sociology of media and political communication, Turkish modernization and political culture.