Does the 1997 Coup Trial Suffice to Confront the History of Coups?

The room for maneuver created by the strong reaction to the 2016 coup attempt by the Turkish public and politicians must be well employed. The required actions in this context are that the 1997 coup trial must be concluded, other participants must face the consequences of their actions and all effects of the process must be negated. 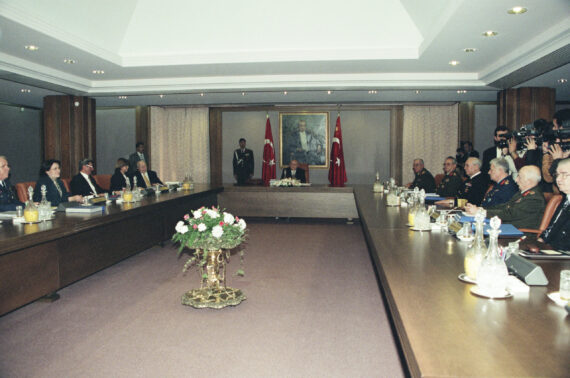 The trial for the February 28, 1997, coup, heard by the Ankara 5th High Penal Court, is about to be finalized. A total of 103 defendants are being tried as part of the case, including Gen. Ismail Hakki Karadayi, the Chief of General Staff during the coup, and his deputy retired Gen. Cevik Bir, former Land Forces Commander retired Gen. Erdal Ceylanoglu, who was responsible for the symbolic release of tanks through the Sincan district in Ankara, Teoman Koman and Cetin Dogan as well as a number of civilians such as Kemal Guruz, former head of the Higher Education Board (YOK). On November 23, 2011, the Ankara Prosecutor’s Office announced that an investigation had began on the 1997 coup as part of Article 312 of the Turkish Penal Code, which reads: “Any person attempting, by the use of force and violence, to overthrow the government of the Republic of Turkey, or to prevent it, in part or in full, from fulfilling its duties, shall be sentenced to a penalty of aggravated life imprisonment.” The indictment was submitted to the court on May 22, 2013. Following the hearings that lasted for over four years, the trial was concluded on December 21, 2017, and the prosecutor asked for aggravated life sentences for the 60 defendants who were within the chain of command at the time of the coup. The defendants posted their final pleas in response to the prosecutor’s opinion between January 8 and 10, 2018 whereas the hearings had been postponed to February 12. By this time, the court is expected to give a final verdict after all the final pleas are presented. Thus, recent developments over the past couple of months brought the forgotten trial back onto the agenda.

Prior to the July 15, 2016, coup attempt, the judiciary in Turkey sided with previous putschists and tutelage regimes. It was only until recently that the country’s judiciary stood with and supported the national will and legitimate government for the first time. As a matter of fact, this change in the judicial system began with the Supreme Board of Judges and Prosecutors (HSYK) elections held in 2014 and presented significant possibilities for the fight against the Gulenist Terror Group (FETO). The judiciary has been the leading institution running an effective and determined fight against FETO during the December 17-25, 2013, judicial coup attempts and before and after the July 15, 2016, coup attempt. Despite some problems stemming from FETO-linked members of the judiciary during the early stages of the investigation, the 1997 trial constitutes a considerable phase of the fight against putschist conventions and tutelage regimes.

The  “postmodern” character of February 28 and the trial process

Some groups assert that the actions leading to the Feb. 28 process cannot be regarded as a coup attempt and do not constitute an offense in terms of penal responsibility since the military did not virtually seize power. We have also witnessed defendants presenting their pleas within this scope. The pleas of defendants within the 1997 coup trial stressed that former Prime Minister Necmettin Erbakan resigned from office voluntarily, that politics in the country underwent a transformation in its own right, the military did not intervene virtually, all actions were in accordance with the duties and authorities vested by the Constitution and law, and that laws were not breached.

While the Turkish Armed Forces did not virtually seize power on February 28, 1997, it exercised a tremendous control over politics, state and society with all means. In doing so, the military utilized instruments of the bureaucratic tutelage system that was established with the 1961 Constitution and consolidated with the 1982 Constitution, whereas the National Security Council turned into a shadow government. Although the MGK, according to the Constitution, is only an “advisory body,” it gave instructions to the government and followed these instructions in all the state institutions by means of the MGK’s Secretary-General’s Office. A separate control mechanism named West Working Group (BCG) was also established unlawfully outside of the constitutional state organization. With the briefings given, the judiciary was prompted and hundreds of investigations and lawsuits were filed mostly on political grounds. The opposition parties sided with the military instead of protecting the domain of politics whereas the media became the leading actor of the process. Media outlets went to any length in order to spread fear in society and to legitimize the military intervention. As a result of this, the legitimate government that came to power with free and democratic elections was overthrown, the Welfare Party was closed, political bans were introduced, the True Path Party was dissolved and hundreds of thousands of people suffered from unjust treatment as an outcome of the implementations of the MGK decisions. As opposed to the arguments brought forward in the pleas of the 1997 coup trial defendants, an exceptional period was experienced before the eyes of the public at the time.

In a statement made, Erol Ozkasnak – Secretary General at the office of the Chief of General Staff during the 1997 coup and for whom the prosecution asked for an aggravated life sentence – openly admitted that they “staged a postmodern coup on February 28.” He explained the “postmodern” character of the coup as follows:

“It was a successful process that did not resemble previous coups. There was no bloodshed and nobody was upset. It was through democratic means and with the assistance of nongovernmental organizations.”

FETO and its shadow on the 28 February trial

February 28 was a process that occurred before the eyes of the Turkish people and which was greatly condemned by a majority in their hearts. This is why the February 28, 1997, coup trial provides a good opportunity for Turkey to face with its history of coups. However, the trials planned and conducted by FETO, for example, Ergenekon, Sledgehammer and the military spying trial, and the injustices that occurred during these trials make it harder for the 1997 coup trial to be conducted fairly and competently in the public eye.

We can see that the perpetrators of the 1997 coup are trying to hide behind the image of a mistreated and falsely accused Turkish soldier generated by these trials. In fact, this strategy can also be observed in the 2016 coup attempt trial. These conspiracies of FETO are now being used to shelter and excuse the real perpetrators of military coups.

When the 1997 trial process first started, it was actively sabotaged by FETO-linked elements active in the judiciary at the time, especially among specially authorized prosecutors and courts. The prosecutor who prepared the indictment of this trial and an important number of judges that presided over it have been expelled from office due to being members of FETO. We can now see that the defendants are using this point as the foundation of their legal defenses. FETO must have considered this trial unimportant and useless for its own interests as the organization did not exert as much effort on this trial as it did on trials regarding coup plans such as the Sledgehammer case. A reason for this is that while the 1997 coup greatly impacted the religious masses, it opened new doors for FETO members.

Despite the attempts of FETO to sabotage the case, the 1997 coup trial process is near to an end. However, this alone is not enough to address the injustices and crimes that occurred within the February 28, 1997, process. A significant number of people involved in this process were left outside of the trial. For example, no steps have been taken against the media, which was the most important and effective element during the process. Obviously, it is not possible to try all media workers involved in court. Legal accusations in the context of punishment law may not be applicable to some people involved. However, it is neither tolerable nor understandable that some media members, despite all their involvement in the 1997 process, are still using various platforms to accuse others of infringing democracy and human rights.

Another issue along with punishing the perpetrators of the 1997 coup is addressing the injustices that happened during the process. With this idea in mind, some measures have already been taken. Public workers who were forced out of their positions due to wearing headscarves were allowed to return to their jobs. People who had no choice but to leave their schools during the February 28 period were given the right to return. However, no solid measures have been taken in regards to the people convicted by the military in trials held during the coup process. It is difficult to make blanket statements regarding legal matters and a case-by-case examination is required to assess the validity of these trials and the sentences dealt. Yet it is noted that around 600 people received heavy sentences during trials in 1997 and some of them are still in prison. Some also put forward that these sentences were generally based on a series of abstract accusations rather than any solid evidence of offenses. The re-evaluation of these cases and consideration of other injustices that may have occurred due to February 28 would be an important step in facing the history of the 1997 coup.

The room for maneuver created by the strong reaction to the 2016 coup attempt by the Turkish public and politicians must be well employed. The required actions in this context are that the 1997 coup trial must be concluded, other participants must face the consequences of their actions and all effects of the process must be negated.