Surely there is a Supreme Court in Berlin today. But it is alarming that a state of law who is the founding member of the EU is currently guarding coup attempters, which is not even kept as a secret. The German public will hopefully bring them to account one day. 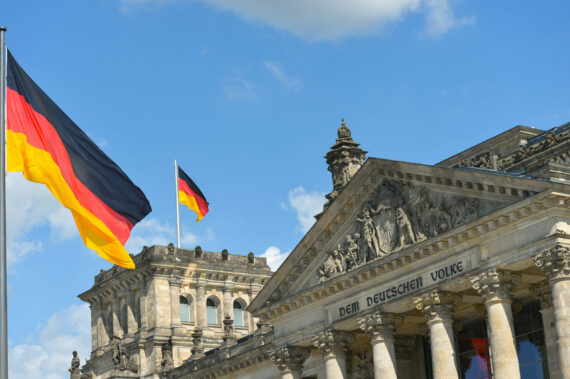 A front view of the Reichstag building, the seat of the German Parliament. On Tuesday, August 29, 2017, in Berlin, Germany. Getty Images

Once, the Prussian King Frederic II chose a place in the southwest of Berlin for the construction of a palace for himself. But there was a massive mill in the land. So, if he were to have a palace in this place, the mill would both spoil the panorama and make noise. Upon that, the King went to the owner of the mill named sans-souci (carefree) and told him that he decided to buy the mill at that very moment, asking him to estimate a price for it. Sans souci refused to sell his mill and answered the King’s threats and objections as follows: “Of course, your majesty, your majesty could easily do that, if – begging your pardon – it were not for the Supreme Court in Berlin.” The King gave permission for the construction of the palace, whereas the mill remained within the complex. Eventually, the palace was named after the miller. Since then, those words of the miller are employed in such contexts related to justice in Germany and various other countries including Turkey.

As looked through the present-day perspective of Turkey, we see military coup plotters alongside the PKK militants in Berlin. Of course, there is a Supreme Court in Berlin, but the present justice system does not interdict their presence. One can contend that it is customary for the states regarded as democratic to protect several terror groups, which is true. However, the definitions, regulations and penalties with regard to terrorism, terrorists and terror crimes vary from country to country across the world. The approaches similar to Germany’s have also been displayed in the policies adopted by other European countries in the case of the PKK. Consequently, although it is unacceptable for Turkey, this approach of Germany can be evaluated within the norms of the European Union. But no matter what justification is employed, there is a fact that Germany can never explain today. How could Germany, one of the two founding states of the EU, harbor and protect the people who attempted to stage a coup in Turkey, who is an EU candidate? Being the leading state of the EU, Germany has to make it clear that on which EU criteria they protect the Gulenist Terror Group (FETO) militants.

The FETO operatives who attempted to stage a military coup in Turkey on July 15, 2016, which killed 248 people and wounded more than 2.000, fled to Germany shortly after the attempted coup. According to the data released by the Federal Office for Migration and Refugees (Bundesamt für Migration und Flüchtlinge, BAMF), a total of 1.059 people, including 288 with diplomatic passports and 771 with green (bureaucratic) passports, requested asylum between the time of the attempted coup and March 2018; and almost half of them were granted with asylum.

Also, Germany was not informed about the organizational structure of FETO solely through the channel of Turkey. On July 25, 2014, the intelligence service of Baden-Württemberg state released a comprehensive report about FETO on its website. But it turned out that the report was removed from the website following the coup attempt. As of August 2016, it became apparent thanks to the statements of the suspects and the witnesses and intelligence data that FETO members chose Germany as a harbor. Among the Turkish public, no one has doubts regarding FETO’s role in the failed coup. Hundreds of statements and analysis on the subject issued by many politicians of all political parties, including the Peoples’ Democratic Party (HDP), can be found with a simple Google search. Despite that, the German Federal Intelligence Chief Bruno Kahl gave an interview to Der Spiegel on March 18, 2017, in which he claimed that FETO is a non-governmental organization engaging in religious and secular education activities and they were not convinced that FETO leader Fetullah Gulen was behind the coup attempt. These remarks stirred a great deal of reaction not only from Turkey, but from the German media and the Left Party of Germany.

In an article entitled “Wo Erdoğan Recht Hat?” (The Points Where Erdogan is Right About), which was published by TAZ on September 11, 2017, Jürgen Gottschlich covered the allegations on the criminal records of prominent FETO members and touched upon the possibility that Kahl either is not familiar with the issue at all or does deliberately protect the organization. Another article published by FAZ a few days later warned that in case it is found that the FETO operatives whose part in the coup attempt were proven were hiding in Germany, Berlin would not overcome the burden of harboring a criminal organization in its territory without taking legal proceedings.

The Left Party also issued a number of parliamentary questions on the subject. The replies given to these questions by the German government clarified Germany’s stance on FETO. One of the questions demanded to know that on which intelligence data Kahl’s remarks are based and whether Berlin was informed about the identity of the forces involved in the failed coup. The answer given to this question underscored that the organization was not monitored by the Office for the Protection of the Constitution (Bundesamt für Verfassungsschutz or BfV). Of course, Germany could not have announced the contacts it had with FETO members it protects. But with the answer given to the second parliamentary question, the German government avowedly displayed its position. The government suggested that answering such a question is not possible for the vital interests of the German state.

Surely there is a Supreme Court in Berlin today. But it is alarming that a state of law who is the founding member of the EU is currently guarding coup plotters, which is not even kept as a secret. The German public will hopefully bring them to account one day.