Does the Turkish opposition have any sense?

Sad, isn’t it? The CHP and its leader Kilicdaroglu, who faced nine election defeats, did everything to hinder Ince’s competing in the convention although they had presented Ince as the presidential candidate only two months ago. Amid all the debates, Kilicdaroglu contented himself with changing the Central Executive Board for the tenth time. 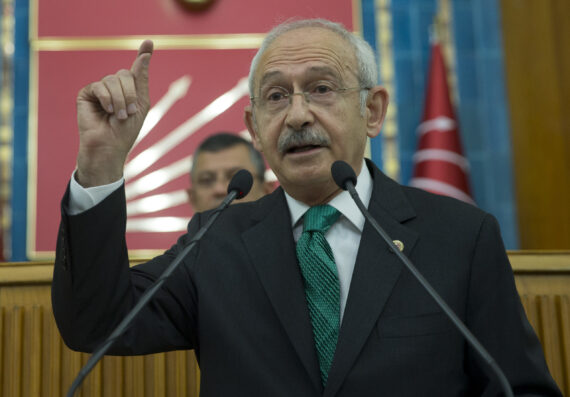 Kemal Kilicdaroglu, Chairman of the Republican People's Party (CHP) makes a speech during his party's group meeting at the Grand National Assembly of Turkey (TBMM) in Ankara, Turkey on April 24, 2018. Anadolu Agency

An analysis on Turkish elections was published in Foreign Policy, entitled “Turkey’s Opposition Lost to Erdogan, Then It Lost Its Mind.” The article reads: “Since June 24, when Turkish President Recep Tayyip Erdoğan celebrated his thirteenth consecutive electoral victory, his opponents have been in a headfirst free fall. Their sad state captures the fundamental problem of Turkish politics: The opposition is out of ideas and lacking in inspiration and its leaders care more about keeping their seats than keeping their country afloat.”

It is an entirely different discussion as to whether the opposition had a mind to lose, but it is obvious that their current situation is saddening. Ever since Kemal Kilicdaroglu became the chairman of the main opposition, Republican People’s Party (CHP), on May 23, 2010, he changed the Central Executive Board of the party nine times, organized five conventions, renewed the party assembly numerous times, and assigned a total of 300 new names throughout this period. But all these changes did not save Kilicdaroglu from facing nine election defeats within eight years. And this time, the party did not only lose the election but also took a heavy blow despite the CHP’s presidential candidate Muharrem Ince earning eight points higher than the vote share of his party in the presidential elections.

I assume that they are referring to these factors when they say that the opposition is out of its mind. On the night of the elections, the party’s deputy chairmen argued on televised programs that the presidential election would definitely make it to the second round according to the results they obtained. When Ince could not be reached for a long period after the results were announced, it was claimed that Ince was abducted by Erdogan, and most of the electorate believed this absurd claim. Ince said: “I was not abducted. Those claiming or believing such a thing must be schizophrenic.” A week later, the deputy chairmen of the party had to admit that they lied during the election night and were in fact already informed about the results after some party members exposed what happened that night.

However, it is true that Ince’s vote share in the presidential election was eight points higher than the CHP’s vote share in the parliamentary election, which naturally led Ince proponents to demand a change in the leadership and call for an extraordinary convention in the party. Kilicdaroglu blamed Ince by arguing that the latter only cares about his seat, to which Ince responded: “I do not care about my seat, but organizing a convention is essential.” Upon that, the party’s head office suggested holding the convention if 615 signatures could be gathered amongst the delegates. For a couple of weeks, several deputy chairmen of the CHP and Ince quarreled through Twitter. Kilicdaroglu proponents blamed Ince for being “rude and shallow” and being a “denigrator,” to which Ince responded: “If I am to get elected, I will be your chairman, too. I understand that you are under pressure.”

Two weeks later, Ince proponents announced that they gathered the required number of signatures to organize the convention. However, the head office stated that “Out of 618 signatures, four are duplicated, five do not belong to a delegate, 31 are revoked, 4 are forged, and 5 are not signed in the relevant date. Consequently, the sufficient number of signatures could not be collected and thus the convention will not be organized.” When the revoked signatures triggered speculations that Kilicdaroglu exercised pressure on the delegates, the head office said: “They revoked their signatures just as they signed, which is very natural.” After this statement, eight Ince proponents went on a hunger strike. They waited with placards reading “I love living and keeping everything alive. But I am hopeless. Either I die, or I will see the convention. The choice is yours.” But they ended the strike when the head office did not give any response.

Sad, isn’t it? The CHP and its leader Kilicdaroglu, who faced nine election defeats, did everything to hinder Ince’s competing in the convention although they had presented Ince as the presidential candidate only two months ago. Amid all the debates, Kilicdaroglu contented himself with changing the Central Executive Board for the tenth time.

Meanwhile, the oppositional Good Party (Iyi Party) Chairwoman Meral Aksener left the first party meeting after receiving a 7.29 percent vote share despite all the hype revolving around her in both the national and international media. On the next day, she announced that she had left her seat and would not become a candidate in the party convention. But she returned only a week later. The party members did not know that Aksener would leave, and they did not know whether she would run for chairperson when she returned, and now they are not sure if she will stay even if she becomes the chairwoman. According to rumors, Koray Aydin, one of the leading figures of the Iyi Party, will join the Nationalist Movement Party (MHP) while several other members are said to join the CHP or the ruling Justice and Development Party (AK Party). According to another rumor, Aydin will not join the MHP but become the chairman of the Iyi Party while the other party members will either remain independent or join other parties.

This is the current state of the parties and their leaders who vowed to make a change and govern Turkey only two months ago.