Dual-Citizenship of Turks: A Populist Instrument in German Politics?

Politicians in Germany with certain future career goals regularly and insistently address similar populist and Turkey related topics. This is a fundamental problem for major conservative parties and circles. 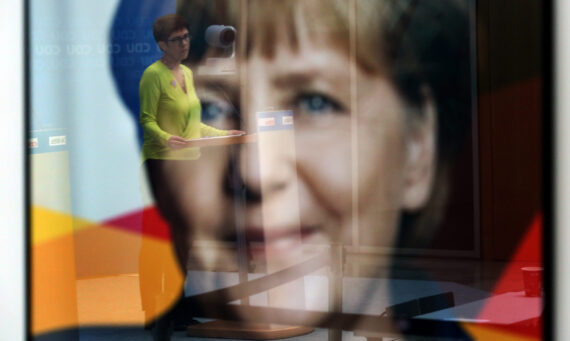 Secretary General of the Christian Democratic Union (CDU) Annegret Kramp-Karrenbauer is reflected in a picture of German Chancellor Angela Merkel after a meeting of the CDU governing board the day after the Christian Social Union (CSU), the Bavarian sister party to the CDU, faired poorly in Bavarian state elections on October 15, 2018 in Berlin, Germany. Getty Images

Even though the annual convention of the CDU’s youth wing held on 6 October got public attention due to some of the critical statements made against Chancellor Merkel’s leadership, one interesting stance by the CDU’s General Secretary Annegret Kramp-Karrenbauer, who is known as one of Merkel’s closest allies, has been partly disregarded in particular by the Turkish public.

The annual convention was elaborated as a first stage right before the CDU’s party congress in December, during which Merkel is hoping to be re-elected as the party’s chairperson. Despite several other potential and younger candidates, it seems quite obvious that Merkel is going to win the election in December. However, following the current period of her fourth government in three years, another CSU personality will most likely take over the party leadership.

It’s striking that potential candidates aim to push towards a rather nationalist bias by insistently making use of anti-Turkish discourse. This happened once again during the recent annual convention, as Mrs. Kramp-Karrenbauer addressed Turkey-Germany relations in the context of dual-citizenship for Turkish people living in Germany.

During her speech at the annual convention, Kramp-Karrenbauer criticized Turkey’s President Erdogan by stating, “If President Erdogan continues to push Turks into a loyalty struggle, the right to have dual-citizenship has to be reconsidered again. If Erdogan wants to divide the Turkish community in Germany, this topic will be on the table, in particular for Turks with a dual-citizenship.”

No doubt, the CDU’s General Secretary Kramp-Karrenbauer is trying to make us of anti-Turkish mood by falsely accusing the Turkish president in order to increase her profile in the eyes of the younger and more nationalist voters. One should remember that despite the CDU’s historical disapproval of the right for dual-citizenship, Chancellor Merkel was – together with and due to the pressure by the coalition partner SPD – able to pass an amendment to the citizenship law in 2014, which finally allowed for young and newborn Turks to hold both Turkish and German citizenship.

Other EU citizens already have this right. However, till this date, some CDU members have continued to problematize this step, in a rather blackmailing manner. Such politicians have implied, or directly threatened, Turks in cancelling this right, particularly in cases when either President Erdogan receives support from Turks in Germany, or if the CDU’s votes decrease due to domestic problems.

In such conditions, politicians do not hesitate to make use of a nationalist discourse as in the most recent case of Kramp-Karrenbauer. However, on the other hand, no concrete steps are taken or no sincere statements are made by CDU politicians when Turks or Muslims in Germany face difficulties in their daily lives, caused especially by far-right and anti-Islam circles.

It’s very likely that people would rather welcome statements by Germany’s conservatives who are not playing in the hands of far-right voters and dividing society by themselves. In recent years, the bias of conservatives in Germany has reached a peak of absurdity.

Although these kinds of topics have nothing to do with Germany’s current problems, politicians with certain future career goals regularly and insistently address similar populist and Turkey related topics. This is a fundamental problem for major conservative parties and circles.

My estimation is that Kramp-Karrenbauer will be the CDU’s next chairperson, unless more controversial and even more nationalist personalities such as Jens Spahn are able to mobilize more supporters. In this context, Kramp-Karrenbauer was appointed by Merkel as the party’s new General Secretary in February and quit her job in the German state of Saarland.

The reason for this was the fact that federal CDU members became increasingly critical against Merkel’s policies and her weakness to build a new federal government. Consequently, in order to silence criticism, Merkel brought a close ally into the federal stage who is also a rightist and more conservatively oriented in societal topics. Kramp-Karrenbauer appeared in the media in 2017 when she banned Turkish politicians from holding election campaigns in Saarland – despite the fact that no politician from Turkey had actually planned to campaign in Saarland.

One notices a similar pattern and a symbolic act of which certain politicians regularly make use of in order to achieve some populist goals within a party. But these kinds of abnormalities cause an unrest among the Turkish community, encourage far-right circles and contribute in a negative way to Germany’s image. One has to consider these ambivalent and populist maneuvers in depth and decide who is dividing German population.