The 2023 Vision Document has really created a vision. However, we should make a priority list and fulfill the responsibilities that we, as educators and administrators on every level, carry. How can the ministry provide the budget for these visions when we fail to realize its very basic missions. 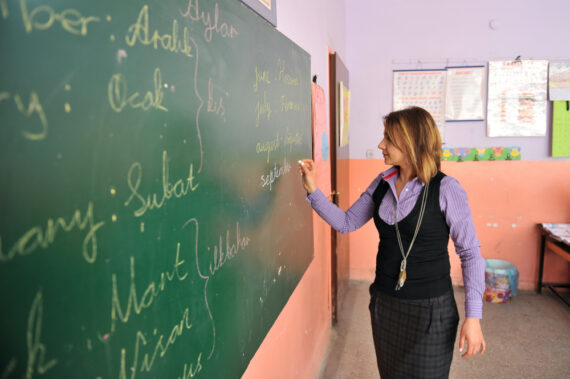 The Ministry of National Education declared the eagerly anticipated ‘2023 Vision Document’ on 23 October 2018. Causing hope and disappointment at the same time, it ignited new debates in the field of education. It is true that, with its extensive and vague scope, education has never been an easy subject to reach a consensus on easily. It would be no more than an unrealistic dream to expect such a thing to happen. Yet, keeping this reality in mind, I have some words to say on behalf of teachers. There are many arguments to open, I am going to delve into only a couple of strong and weak points, though.

When I read the document through, it gives the impression that it’s a summary of idealistic thoughts about the education in Turkey. Well, for vision statements in general, they are compiled of high level aspirations, not bound to be down to earth. The whole document is a summary of what education should be like, not only in Turkey, but almost in any country in the world. Who could ever say that these are bad ideas? I review the document and it feels like ‘yeah, there could be no objection to many promises the vision document makes but what about the distance between vision and practicality?’ Is it helpful to leave the practicality of these ideas out of the vision document?

Quality education cannot be built without providing quality pre-service education to foreign language teachers. In-service education is too late to acquire important skills required for foreign language itself and the teaching of it. In other words, while in-service training is indispensable, I believe that it is better to put much more effort and resources in the earlier stages of teacher education. The document should consider in its further revisions to state a more clear vision about the pre-service teaching of foreign language educators and the appointments of them.

Some of the central visions in the document are not novel but were already set as guiding principles for foreign language teachers. For example, the first subsidiary aim of the first main objective reads “foreign language education will be handled with a student-centered approach, using methodologies that suit the cognitive levels of students.” This vision is already a mission for foreign language educators. Especially since the curriculum reform of 2005, putting students at the center and teaching them according to their cognitive levels have been a primary mission for all teachers, let alone foreign language teachers. In other words, this vision seems like it has been blended with the very basic mission of teaching.

I’m not trying to say that the whole document is full of beyond reach ideals of re-written versions of missions. There are issues that have needed a complete make-over for a long time. The third subsidiary aim of the first main objective, which is to “provide different language teaching programs to different kinds and levels of schools,” offers a vision about what has been long necessary in the field. Implementing a single foreign language program and not taking care of the academic profile of students have always been problematic. That is to say, today in different schools across Turkey, no matter what student profile it addresses, the same program and material is used. Moreover, using the same book is compulsory, which forces teachers into the situation of giving students less than what they can learn. If we have different kinds of secondary and high schools, how on earth can we use the same teaching material? So, the third subsidiary aim under the first main objective endows fruitful arguments, more than idealistic thoughts.

Another strong point of the vision document is the development of digital content platforms by bringing national and international institutions together. It is a fact that foreign language learning materials, especially the high quality ones, are still costly and can hardly be afforded by many middle and lower class families. It is of great importance to provide free quality contents to students from lower socio-economic backgrounds. Addressing the generation that was born into a digital era is an approachable vision.

In fact, there is already a digital platform named Education and Information Technologies Network (EBA), which has a substantial amount of free sources and materials. Nonetheless, many children from lower socio-economic classes, who must be the primary target of free materials, don’t have internet access at home, and the public schools don’t have the sources to build ICT laboratories or provide free Wi-Fi connections for student use. The Fatih Project hasn’t visited many schools yet. In short, the visions about digital content are imperative, yet given the varying physical capacity of schools and inequality of household income, this has the potential to create further inequalities between students.

The 2023 Vision Document has really created a vision. However, I do strongly assert that we, as educators and administrators, should make a priority list and fulfill the responsibilities like providing each and every child with quality education.

Başak Coşkun graduated from Middle East Technical University, Department of Foreign Language Education, in 2005. She has worked as an English teacher at various private and public institutions. She earned her master’s degree from Erciyes University, School of Educational Administration, Supervision, Planning and Economy. She is currently a PhD candidate in Educational Administration and Supervision at Ankara University, and is working as an English teacher at a public high school in Kayseri.