By reproducing an originally Western image of Islamist groups, Egyptian filmmakers have created a self-orientalist image of their fellow citizens. 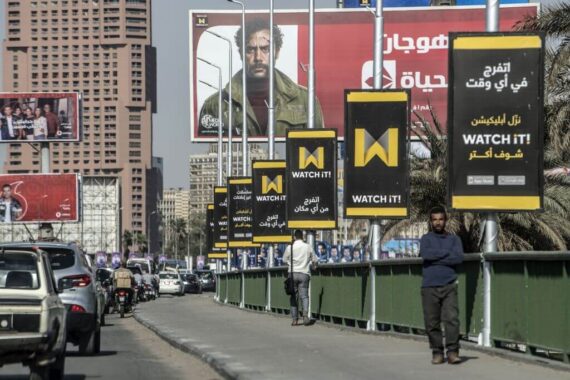 A picture taken on May 7, 2019 shows billboards advertising "Watch iT", Egypt's first video-streaming app, in the capital Cairo. - The video-streaming app was launched this month just in time for the Muslim holy month of Ramadan, the high season for the television industry, but its debut has been dragged by critics over high prices and technical failures. Photo by KHALED DESOUKI/AFP via Getty Images.

In Egypt and most of the Arab world, the holy month of Ramadan is TV series’ prime season. This year, during Ramadan, Islamist movements and terrorism were among TV series’ main themes; however, this topic has already been a focus point in films and on TV since the 1990s.

Many works such as Al-Irhabi (The Terrorist), Toyour Elzalam (The Birds of Darkness), or El-Nagoon Min el-Nar (Survivors of Hell) addressed the subject of Islamist movements and terrorism. Interest in the subject continued for the film and drama industry in the following years through works such as “Dam El-Ghazal” (The Blood of the Deer, 2005), The Yacoubian Building (2006), and El-Gamaah (2010).

Egyptian filmmakers tend to refer to Islamist groups and terrorism synonymously. This association continued in various TV dramas in 2021 such as “The Choice 2: Men of the Shadow”, “Cairo: Kabul”, and “Counterattack.”

The discursive association of Islamism with terrorism is based on three main typologies of Islamic groups in the Egyptian film industry. The first is Islamist groups or movements which aim to establish an Islamic political, economic, and social order, and to reorient the state accordingly. The second is non-political, traditional Islamic groups, which involve many subgroups such as Sufis, or local mosque communities that are mostly nonpolitical, with less public influence, and that are limited to local communal activities. The last type is the group of scholars (ulama) who are dominantly associated with Al-Azhar.

In Egypt, the film and drama industry associates terrorism with Islamists by capitalizing on the armed practices of some of these groups. Among these are the armed activities in Egypt of groups such as al-Jama’a al-Islamiyya between the 1970s and 1990s, and the more recent operations of Daesh (ISIS) and Al-Qaeda. The industry has also capitalized on the political turbulence during and following the ruling period of the Muslim Brotherhood between 2012 and 2013. Political instabilities created an atmosphere in which negative representations of such groups were widely accepted by society.

What makes the story more interesting is that the traditional Islamic groups and the ulama were used in the derogatory portrayals of the Islamist groups. In these dramas, both the traditional Islamic groups and the ulama criticize and demonize Islamist groups, while also serving as a reference for how true and pious Muslims and Muslim congregations should be. The latter are represented as peaceful, practicing, ethical, and polite Muslims.

Most importantly, unlike the “rebellious” Islamists, they comply with the political authority (waliyy’al-amr) as a religious requirement. Thus, they tacitly criticize the Islamists by representing them as people that are misinterpreting Islam – the correct interpretation of Islam appears in the actions of the traditional groups.

In the case of the ulama, only the members who back the state and criticize the political activities of the Islamists are represented, such as the scholar Ali Gomaa. However, this time, their criticism is direct. In the movies, as in reality, the ulama condemn the activities of Islamists, regarding them un-Islamic. This has happened even when movies depict real-life cases for which there is no solid evidence of Islamist involvement.

Therefore, the filmmakers appeal to their audience by referring to the authorities of other Islamic groups in order to depict Islamists in a negative light and as misinterpreting religion – and this method appears to work. Many of these shows continue to be produced, aired, and to make a profit. This success can also be seen through a quick review of the audience’s comments on the shows in different social media platforms. The narrative of Islamists distorting Islam and the true Islam being the one represented by traditional Islamic congregations and the ulama is strongly established. On the other hand, those who criticize this narrative could occasionally be labeled as “terror-proponents.”

What is discussed above are Egyptian reproductions of an image of Islamist groups that was originally Western.  With these reproductions, Egyptian filmmakers have created a self-orientalist image of their fellow citizens. This image was present in most of the shows and movies of the 1990s that focused on that topic of terrorism and further survived as a tradition in later shows and movies.

Such Egyptian TV dramas serve to spread a narrative that conflates terrorism and Islamism. The attitude of equating Islamism with terrorism started to appear in Western media after the Iranian Islamic Revolution (1979) and the Iranian hostage crisis (1979-81). By the 1980s, this association appeared vividly in the Western media coverage of the hostage crisis, and in movies that dealt with the crisis and the revolution. It also became a trend after 9/11 and with the start of the United States’ infamous war on terror.

Egyptians purchase fanus lanterns ahead of Ramadan festival in Cairo on June 14, 2015. Lanterns became the symbol of Ramadan and an essential part of Ramadan’s magical atmosphere in Egypt. Ramadan lanterns are frequently made from recycled tin cans or plastic lanterns that play the latest popular music. Lanterns and lamps of various kinds, hues and degrees of brightness, have always been special to the Egyptians. Photo by Mohamed Mahmoud. Anadolu Agency.

The shows oversimplify and naively portray the reality through stereotypes that eventually produce a form of self-orientalist discourse. Using similar stereotypes and clichés, Egyptians, as non-Westerners, view their fellow citizens who have a different political affiliation – in this case, Islamists – as old-fashioned orientalists.

A brief analysis of the self-orientalist representations of these TV dramas shows that there are generally three characters representing three factions in Islamist groups: the leader, his disciples, and the newcomer.

Sheikh – The Leader: This character is usually a man over 50, with a long, white beard who speaks Classical Arabic (Fusha). He wears a traditional Arab dress (thawb) and is very invested in women as he has more than one wife and keeps changing them. He recites hadiths and passages of the Qur’an frequently in his casual discourse, but often misinterprets the meaning to fit his agenda. He manipulates the public, especially the youth. Meanwhile, he is aware of his distortion of religion, yet, he is only concerned about his personal interests.

The Disciples: These characters are the direct assistants of the leader. They are usually a younger version of the latter in terms of physical appearance, dress, and speech. However, they are divided into two categories: those, like the leader, who are aware of the distortion and manipulation they cause but who benefit from it, and those who are deceived by the leader and think that they are truly serving the religion and applying “Jihad.”

The Newcomer: This is the main character, who is generally a young man suffering from poor socioeconomic conditions. He finds his way to salvation in religion by joining a religious group, which offers him the prospect of escaping his miserable conditions; however, he falls victim to manipulation by the leader of the group and his disciples.

The group is depicted as a violent, terrorist organization, which proclaims anybody who refuses its objectives or disagrees with its statements as an infidel. The group is generally depicted as resorting to violence with shootings and bombings that take innocent lives.

Such characters and religious groups have been portrayed in a similar fashion in various Western TV shows, especially ones produced in the United States such as “24”, “Sleeper Cell”, and “The West Wing.” Such shows have used similar representations of “terrorist” organizations and their members. Evelyn Alsultany, an expert on the history of the representations of Arabs and Muslims in the U.S. media, calls these Western depictions the “terrorist stereotype.”

In her analysis of U.S. shows, Alsultany points out that they use certain strategies in an attempt to give the impression that the Muslim or Arab characters in the shows are complex, but in truth, they are simplified and stereotypically linked to terrorism. One of these strategies is “inserting patriotic Arab or Muslim Americans.” This strategy entails a “positive” patriotic Muslim character who knows the religion well and fights “bad” terrorist Muslim characters who are abusing Islam.

A similar method is followed in many Egyptian TV series, which take terrorism as their theme. The most recent examples are “The Choice 2: Men of the Shadow”, “Cairo: Kabul”, and “Counterattack,” aired during Ramadan this year. These TV shows all include religiously well informed officers, agents, and even a whole police unit, as in the case of “The Choice.” These practicing Muslim state officials fight the terrorist Islamist groups which, once again, misuse religion to deceive youth and attain their goals.

VIDEO: Kingdoms of Fire: The Political Backstage (Part I)

Why is this the case?

There are various factors that help sustain the self-orientalist “tradition” in the Egyptian film industry. They can be political, financial, cultural, or a combination of all. With their immense control over the film industry, political authorities do not allow a different narrative to be told about Islamist groups. For financial reasons, a more accurate nuanced image of the reality is not drawn as the audience has become used to the same narrative, which has been selling for a long while.

Repeating the same pattern attracts a considerable audience, thus, avoiding failure and potential financial losses. Culturally, filmmakers might view Islamist groups as terrorists and thus display them as such in their works. This might be due to the filmmakers’ worldviews which might be more liberal or secular. It is also important to note that many Islamists have criticized the film industry in Egypt, which might have also contributed to the filmmakers’ negative view of the former.

Regardless of the reasons, portrayals of Islamist groups in Egypt have proven to be a form of self-orientalism. And this is not a recent issue: it started in the 1990s and continues in the Egyptian film and drama industry today.