Egypt’s Rise in the African Political Landscape: A Regional Power?

Egypt is regaining its powerful position in Africa’s political, social, and economic landscape. A reason behind Egypt's renewed interest in African politics is to prevent other regional actors such as Turkey and Qatar – Egypt’s two main rivals – to have any influence in the continent. 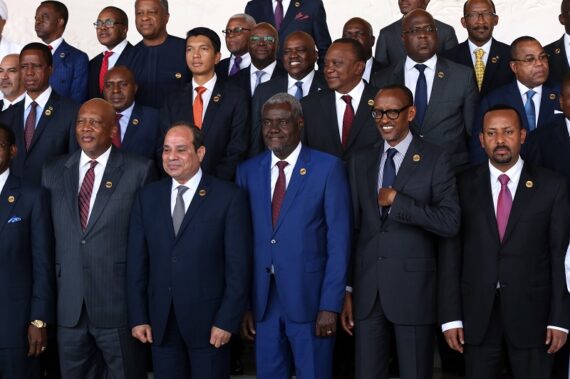 Egypt’s foreign policy has been actively engaging with Africa in the past couple of years. Cairo’s increasing diplomacy traffic has shown that the Abdel Fattah Al-Sisi regime aims to become a leading actor in the region. Sisi has employed various mechanisms in order to become a central actor in Africa. These activities bear fruit as Egypt was awarded with the African Union Presidency for 2019. The country is taking this role for the first time since the establishment of the 55-member organization in 2002. Rwandan President Paul Kagame handed the presidency to Sisi at the 32nd African Union Summit held in Ethiopia’s capital, Addis Ababa, on February 10. In his acceptance speech Sisi emphasized the importance of Africa in global politics and argued that during his presidency he will work to contribute to Africa’s prosperity.

To become a leading actor in the African politics, the Sisi regime has employed various mechanisms and activities that bear fruit as Egypt was awarded with the African Union Presidency for 2019. This move aimed at overcoming its ongoing legitimacy problem.

Egypt’s increasing interest in Africa during the past years is not a coincidence. Since the military coup in 2013, the Egyptian regime has been dealing with domestic problems such as instability, terror, and economic issues. In its foreign policy, the Sisi regime’s priority has been given to countries that provided political, diplomatic, and economic support for the regime in the post-coup period. For this reason, Egypt’s diplomacy focused on countries such as Saudi Arabia, the United Arab Emirates in the region, and the U.S., France, Germany, and Russia on the global spectrum. These countries significantly contributed to the Sisi regime to overcome its legitimacy problem. Once the regime in Cairo established itself as a legitimate power, it began to engage with other regions such as Africa and Asia. This process was further accelerated after Sisi was re-elected to the presidency in a controversial election in early 2018. Since then, Africa has played a more important role in Sisi’s foreign policy agenda.

Since his election to presidency in 2014, Sisi has made around 20 visits to countries in Africa, which accounted to 30% of all foreign visits. The Egyptian premier increased this intense diplomacy especially in 2017 and 2018, aiming to be a more effective foreign policy actor in the African continent by engaging with regional countries and implementing new political tools. Since 2017, Sisi has visited Kenya, Tanzania, Rwanda, Chad, Gabon, and Sudan, while hosting the leaders of South Africa, Congo, Guinea, Burkina Faso, Somalia, Eritrea, Ethiopia, Sudan and Uganda in Egypt.

Sisi has made around 20 visits to countries in Africa, which accounted to 30% of all foreign visits. He has visited Kenya, Tanzania, Rwanda, Chad, Gabon, and Sudan, while hosting the leaders of South Africa, Congo, Guinea, Burkina Faso, Somalia, Eritrea, Ethiopia, Sudan and Uganda in Egypt.

These interactions provided positive comebacks in January 2018 and Egypt was elected to the presidency of the African Union, with the support of the majority of member countries. This was considered as a diplomatic success for Egypt. However, it brought along many criticisms as well. It has been argued that Sisi’s chairmanship of the African Union could lead to a further diminishing of the credibility of the institution. The African Union had initially suspended Egypt’s membership after the military coup in 2013, which was led by Abdel Fattah Al-Sisi. The organization controversially reinstated Egypt’s membership after Sisi was elected President in the 2014 elections, which led to many disputes. The Union emphasized that democratic institutions in Egypt were in place and that a civilian leader was elected in the country, and that therefore the regime in Egypt could no longer be considered as a military rule. However, human rights abuses and the undemocratic practices of the Egyptian regime continued after Sisi’s election as president in 2014 and still continue today. With Sisi’s election to the Presidency of the African Union, an authoritarian leader who oversees a total crackdown on the political opposition at home would effectively run an international organization. Therefore, it has been argued that Sisi’s election to the African Union presidency will significantly damage the credibility of the organization.

Another activity that shows the Egyptian regime’s interest in Africa was the organization of the African Business Summit, which was held in December 2018 in Sharm Al-Sheikh. The Summit witnessed high-level participation, which included Sisi, and the leaders of Rwanda, Togo, Zimbabwe, and Niger. In addition to political leaders, the Summit also hosted business leaders of the African continent, such as Isabel dos Santos, known as the richest woman in Africa, Issad Rebrab, the wealthiest businessman in Algeria, and Abdulsamed Rabiu, a Nigerian businessman. With around 1,500 delegates from 40 different countries, the Africa Business Summit was a significant opportunity for the Egyptian government to sign a number of cooperation agreements with African countries and companies.

Egypt is regaining its powerful position in Africa’s political, social, and economic landscape. A reason behind Egypt’s renewed interest in African politics is to prevent other regional actors such as Turkey and Qatar – Egypt’s two main rivals – to have any influence in the continent.

Egypt also has attempts to reach Africa on a societal level. In this regard, Cairo was very eager to host the African Cup of Nations in 2019. Cameroon was originally the host nation for 2019, but the country was unable to successfully complete preparations for Africa’s most important football event. Following this failure, the Confederation of African Football decided to relocate the tournament. Following this announcement, both South Africa and Egypt announced their candidacies, and Egypt made significant effort to win this candidacy. On January 8, 2019, Egypt beat South Africa by 16 votes to 1 with a CAF Summit in Senegal. This result was joyfully welcomed by Cairo as the Egyptian regime had achieved a timely success, increasing its political and economic presence in Africa.

Finally, Egypt is obviously regaining its powerful position in Africa’s political, social, and economic landscape. One of the reasons why Egypt has been giving priority to Africa is to prevent other regional actors such as Turkey and Qatar – Egypt’s two main rivals – to have an influence in the continent. Therefore, it can be argued that Egypt’s interest in Africa will further increase in the upcoming period and the Sisi regime will try to develop closer relations with the countries of the region.