Unlike previous initiatives that were mainly focused on Islamic movements, the Sisi regime will be targeting secular and socialist opposition, hoping to permanently eliminate all kinds of opposition towards the regime. 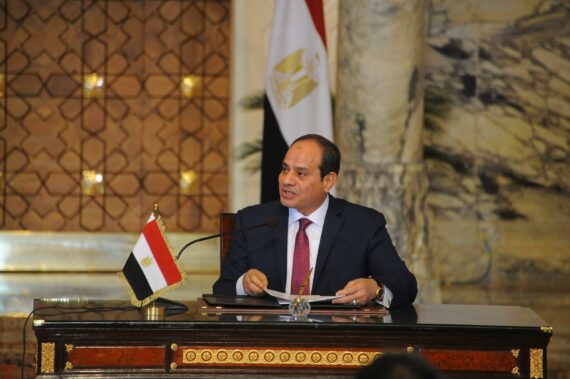 Egypt has been witnessing a new wave of political oppression against civil opposition figures. The pressure has intensified following the election of Abdel Fattah al-Sisi to presidency in the last election in March. What’s different with the current wave of arrests in Egypt is the fact that the Egyptian regime has been mainly targeting the Muslim Brotherhood so far. However, this time the regime is focusing on secular or socialist activists. This is mainly because of the fact that these activists have been criticizing the Sisi regime and its domestic and external policies. Their successful use of social media and the Internet allowed these activists to spread their criticism to a large audience. The wave of arrests, therefore, could be interpreted as the regime’s new strategy of dealing with the opposition. As the Sisi regime has completed its destruction of the Muslim Brotherhood, it now directs its iron-fist on the secular and socialist opposition.

In early May, the secular activist Shadi al-Ghazali Harb and the revolutionary socialist Haitham Mohamedeen were arrested in the raids on their homes with the accusations of insulting the president and spreading false news with the intent of destabilizing social peace and national security. In another incident a housewife, Amal Fathy, was arrested along with her family for joining a terrorist organization, promoting terrorist acts over the internet, and spreading false news that harms national security and public order. Fathy became popular after she posted a YouTube video in which she detailed how Egyptian men sexually harassed her. Another person arrested with similar charges was the comedian Shadi Ebu Zeyd. He was taken into custody following a raid on his home with around 20 policemen.

As the Sisi regime has completed its destruction of the Muslim Brotherhood, it now directs its iron-fist on the secular and socialist opposition.

Finally, the most prominent activist who was taken into custody during the latest wave of arrests was Wael Abbas, a prominent figure during the 2011 revolution. As a secular activist Abbas was known with his critical stance against corruption, torture and human rights abuses. He severely criticized the government both before and after the revolution of 2011. His criticism towards the Sisi regime was on the basis of human rights issues and mistakes in foreign policy. It is announced that Abbas, who was arrested during the police raid on his house in Cairo, will be tried on charges of spreading false news and forming an illegal organization. In December 2017, Twitter shut the account of Wael Abbas, arguing that the account was violating Twitter’s rules. It is suspected that Twitter may have taken the decision on the request of the Egyptian regime.

Another indication of oppression against regime opponents is the 10-year prison sentence for Ismail Alexandarani, a researcher at the Wilson Center in the United States, known for his work on the North Sinai region. Alexandarani, who was detained at the airport when he was entering Egypt in 2015 and remained in pre-trial detention for 2.5 years, was sentenced by a military court to 10 years in prison for joining a terrorist organization and reporting false information.

A recent arrest of a PhD researcher from Washington University also caused concern. Walid al-Shobaky was conducting field research on the judicial system of Egypt when he suddenly disappeared. On the forth day of his disappearance, the state prosecutor informed his family that he was taken into custody. Following initial investigation the prosecutor decided to arrest al-Shobaky for a 15-day detention. Despite the fact that there was hardly any clear information on the case, he was reportedly arrested with the charges similar to other opposition figures that were previously arrested.

The wave of recent arrests in Egypt is a clear indication of the regime’s intention for continuing oppression against dissidents.

This event reminded another brutal incident that took place three years ago. Giulio Regeni, an Italian citizen and doctoral student at Cambridge University, disappeared in January 2016, while he was conducting field research on trade unions and workers’ associations in Egypt. About a week later, Regeni’s body was found on the roadside outside Cairo. It turned out that Regeni was subjected to torture and was killed. During the investigations, it was alleged that intelligence services had killed Regeni. Egyptian authorities deny allegations.

The wave of recent arrests in Egypt is a clear indication of the regime’s intention for continuing oppression against dissidents. Unlike previous initiatives that were mainly focused on Islamic movements, the Sisi regime will be targeting secular and socialist opposition, hoping to permanently eliminate all kinds of opposition towards the regime. However, such a policy would lead to unification of opposition groups, increasing human rights violations and deepening instability caused by the distrust between state and society.