Giving Palestinians permits during Eid will not end the occupation nor will it make Israel look more tolerant and helpful to them. 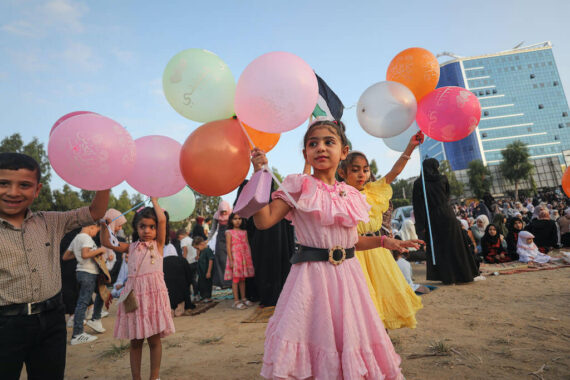 Muslims across the globe mark the Feast of Sacrifice, or Eid aladha, a four-day feast, which takes place a day after Muslim pilgrims stand on Mount of Arafa in the holy city of Mecca, a ritual that completes the last pillar in their annual pilgrimage.

In the Muslim faith, Eid aladha sees the slaughtering of animals such as sheep, cows, etc. which represents the experience of Prophet Ibrahim sacrificing his son as commanded to him by God in one of his dreams. When Abraham was about to go through with what he saw in his dream, a sheep ascended from the skies saving the son who had completely surrendered to his father’s will.

The Feast of Sacrifice is also a season for celebration. Muslim families gather and visit each other. It is an occasion for helping the poor and needy, whereby the meat of the slaughtered animals is given to those in need, to relatives and friends. The feast is a joyous celebration of family, and a reunion where families gather and social ties are strengthened.

Children wear new clothes and are given money and sweets by their elder family members. It is one of two major Muslim feasts, and, in fact, it is the bigger of the two, and is also known as the “Big Feast (Eid).”

This supposedly joyous celebration is a reminder of a different reality under Israel’s ongoing occupation of Palestine. Family reunions translate into a bitter reminder of separation and checkpoints, where Palestinians, if they are lucky enough to be able to meet in the first place, have to cross checkpoints to meet their loved ones. In the Gaza Strip, which has been under Israeli siege for 15 years, Palestinians are not allowed to travel to the West Bank, except for 400 permits that are given to Palestinians from Gaza who have families in the West Bank.

Read: On Land Day in Gaza: Limbs Lost but Not Hope

Israel’s repeated attacks on the Gaza Strip, such as the 2014 attack, serve as reminders of the bitter memory that some 2,200 Palestinians have been killed, including during Eids. My childhood friend Ayman Shokor was killed on the roof of his family house by a random Israeli shell on July 28, 2014, during Eid, and every Eid is just another reminder of this tragic reality. In fact, the first thing that Palestinians do after the Eid prayer is to visit the graves of those killed by Israel and their families, including those in Israeli jails. For many Palestinians, Eid is a reminder of a missing child who no longer shares the same family table.

The economic hardships experienced by the Palestinians as a result of the ongoing Israeli occupation serve as another reminder of their grim reality. It makes it almost impossible for the majority of families to buy Eid clothes for their children or slaughter an animal according to tradition. In a place like Gaza, where over one out of 2.3 million Palestinians live below the poverty line, the impact of the siege on celebrating Eid is very vivid. In fact, being able to preserve the meat without it going rotten is a challenge in itself as electricity is out some 12 hours a day.

Read: My Daughter Asks, “Will There Be Another Israeli War during Eid?”

The increasingly challenging economic reality because of the siege has also impacted social ties during Eid. Some Palestinians refrain from visiting each other as they can’t afford to buy gifts or give their children their Eid pocket money. For many Palestinians, celebrating Eid means increasing life costs which they can’t afford.

In the West Bank, the economic situation is not much better: Palestinians can hardly make ends meet with the increasing food prices and the lack of job opportunities which are greatly affected by the security situation. The Palestinian economy is still fully dependent and control by Israel.

As of April 10, 2022, there were 4,450 Palestinians in Israeli jails, and some of them are on hunger strike to end their administrative detention without a charge or trial. Raed Rayan, 27, is on his 93rd day of hunger strike, and Khalil Awawdeh on his 118th day of hunger strike, which he halted on the 111th day after Israel agreed to release him but then renewed his administrative detention order. For these prisoners and their families, this Eid is just another heartbreaking occasion away from their loved ones.

The international community should pressure Israel to allow Palestinians, regardless of where they live, to visit their loved ones during Eid without restrictions. Israel should remove all its checkpoints that are meant to remind Palestinians celebrating Eid of their reality under occupation where they lack freedom of movement. Eid is an occasion for Palestinians to get together and they should not be forced to remember their forced separation and the control system that Israel has imposed on them.

Palestinians have the right to celebrate Eid without having to shed tears over those killed or arrested by Israel. Seventy-four years under occupation have made Palestinians become more aware of what they have lost, even more so during Eid. A few days ago, Algeria commemorated its independence from France which took place on June 5, 1962. It is now time for the Palestinians to do the same—free of occupation and fear, and able to celebrate Eid with their loved ones.