“Nearly 1 million Rohingya are being subjected to genocide and are fleeing to Bangladesh,” “we never said it was Buddhists who killed them..." 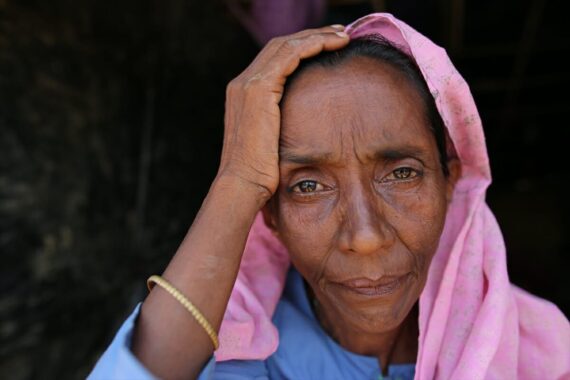 A Rohingya Muslim woman, fled from ongoing military operations in Myanmar’s Rakhine state, poses for a photograph at a makeshift camp in Teknaff, Bangladesh on September 22, 2017. Anadolu Agency

The terror in Rakhine State has once again emerged on the political agenda. Since 25 August mass atrocities against the Rohingya Muslims have been noted by the UN, indicating that these crimes can amount to crimes against humanity.

According to the latest survey of Inter Sector Coordination Group (ISCG), an information hub for the agencies working with the Rohingya issue in Cox’s Bazar, Bangladesh, 429,000 Rohingya have fled to Bangladesh since the 25th of August. 145,000 have taken refuge in the camps while 196,000 Rohingya are still staying on hills and under tents. According to estimates, 88,000 are living with relatives who had left previously.

An issue that has been raised regarding the accommodation of the Rohingya in the refugee camps is the sanitary and living conditions. In fact, many elderly are noted to die on the way or arrive sick to the camps. Those that are currently living in the camps are close to death for lack of sanitary drinking water and muddy living conditions.

Hope for assistance: ASEAN fund may be used to help

The atrocities committed against the Rohingya Muslims have occupied the political agenda for a couple of weeks now, and has reached peak as many world leaders called for the international community to take action during the United Nations General Assembly this week.

While Turkey has maintained the lead in providing humanitarian assistance to the Rohingya in need, as the Turkish Cooperation and Coordination Agency (TIKA), accompanied by First Lady Emine Erdogan, delivered 1,000 tons of aid, lately the Philippines explained that the ASEAN trust fund may be used to help persecuted Rohingya fleeing to Bangladesh.

Secretary Catalino Cuy of the Interior and Local Government, who chairs the ASEAN Ministerial Meeting on Transnational Crime, announced the move after the closing session in Manila on Thursday.

According to the Minister, the mass exodus of the Rohingya from Myanmar to Bangladesh can be categorized as irregular movement and therefore can potentially benefit from the trust fund.

In spit of discussions surrounding the Rohingya crisis, this matter has emerged on a different extension: it is not being labelled “Buddhist terror.”

The President of Turkey, Recep Tayyip Erdogan, highlighted this matter during a speech made at an intercultural event in New York hosted by the Turkish American National Steering Committee (TASC).

While harshly criticizing the use of “Islamic terror” in world media and political discourse, the President stated that “nearly 1 million Rohingya are being subjected to genocide and are fleeing to Bangladesh,” “we never said it was Buddhists who killed them. This is indeed the case, but we never put it as such. Now I call on those who want to endear Buddhists to the world: What gives you the right to say ‘Islamic terror?”

In criticism of those labelling Daesh as an “Islamic terrorist group,” Erdogan highlighted a double standard between Islam and other faiths by asserting, “whoever kills a soul, it is as if they have killed entire humanity. This is among the principles of our faith. Nobody should dare associate Daesh with Islam or Muslims. It is a terrorist group.”