While hostility towards Muslims is reflected almost daily in stigmatizing speeches and discriminatory legislations, the very nature of Islamophobia has changed over the last decade, says professor Raphaël Liogier. 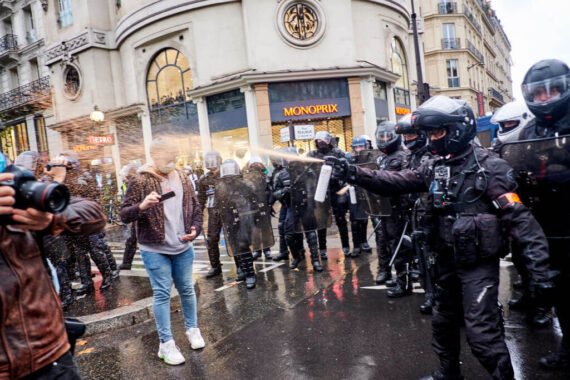 People gathered for a demonstration against the global security law and the draft law against separatism considered as islamophobic in Paris on december 12, 2020. Photo by Adnan Farzat, NurPhoto via Getty Images

Last year, President Emmanuel Macron launched a war against “Islamist separatism” in France after a terrorist attack that targeted a French schoolteacher. On February 16, the French National Assembly passed a bill to reinforce “Republican Principles,” officially aimed at fighting an ideology associated with extremism. However, the bill targets entire Muslim communities in the country by making it easier for the government to shut down mosques, associations, and schools that are found to be critical or not complying with the vaguely defined “Republican values.”

For the French sociologist Raphaël Liogier, professor at Sciences Po Aix and visiting scholar at Colombia University, Islam in France has gradually been constructed as a problem in the media and became the product of a long history of people perceived as refractory to civilization and progress. “Muslims have a peculiar definition in our minds: enemies of the Christian culture, and enemies of modernity and progress.” If Islam has been depicted like this for a long time, the new rhetoric of “Republican values” used by the French government gives another perspective as to how Islam is also “anti-Republican.”

In the name of “secularism”

The Macron law aims to bring about a radical and reactionary transformation of society and politics by imposing a strict state control over the Muslim religion and a principle of collective responsibility which allows political parties and the police to decide the fate of religious associations, organizations, and schools. The law of 1905 that supports neutrality of the state and freedom of religious exercise is a law of separation which implies that the state must renounce the regimentation of cults.

A secular state has nothing to say about what religious dogma should be. It does not have to intervene in the way believers live their faith as long as they respect the laws in force. “Before 2003, secularism meant the freedom of expression in the public space. However, from 2003 onwards, we changed its interpretation. It was not only the neutrality of the state, but also the neutrality of people, which is very different,” says Liogier.

Stigmatizing not only Islamism but Islam itself, is a symptom of this new unqualified rejection of the Muslim population, which is nevertheless largely integrated into the French society. The 2004 law banning religious symbols in schools has opened the floodgates to significant abuses, explains the sociologist. “In 2004, you can see the act of parliament to prevent the scarf, the simple scarf, in public schools in France.”

The recurring persuasion to ban veiled mothers from accompanying children on school outings even though they are not public officials; the attempt by political figures to constantly direct the debate towards Muslim community are in reality a form of Islamophobic propaganda in the name of French secularism.

However, there was obviously an agenda behind all these measures. The 2022 French elections are one year ahead, and the presidential campaign is already underway. Weakened by the consequences of the pandemic, the French president is preparing the ground against his potential opponent Marine Le Pen, leader of the National Rally, a far-right political party. Emmanuel Macron attacks her in her own field by taking up the themes of secularism, the fight against separatism, immigration, and insecurity.

“Following the terrorist attack in Paris in October 2019, he changed his discourse, because he knows well that waging a tight war against terrorism can give him the chance to unite larger numbers of people behind him,” says Liogier.

According to Liogier, the French president knows that the majority of the French population are concerned with these issues, and therefore he tries to anticipate what they expect from him. Macron changed his Presidential strategy from the 2017 elections; that Macron was a “democratic” alternative to neo-fascist candidate Marine Le Pen.

In reality, this tactical election strategy shows first and foremost the contradictions of a government that is walking on eggshells. With the responsibility for the catastrophic balance sheet of the health crisis, and a historic economic crisis and its consequences on the working classes and youth, Emmanuel Macron aims to replay the card of the bulwark against the extreme far-right for the presidential elections of 2022.

A strategy that pushes him to carry out an offensive on the reactionary and Islamophobic ground of Marine Le Pen, while at the same time delimiting himself intermittently in order to embody the party against the populism of the National Rally and its leader. A vast program that has nothing to offer to the youth except for the accentuation of the authoritarian and racist offensive.

Emmanuel Macron aims to replay the card of the bulwark against the extreme far-right for the presidential elections of 2022.

This shift towards authoritarianism is linked to the homicidal policy of the ruling class in response to multiple crises within the country. To implement its homicidal policy, the international ruling class is cultivating fascist forces and turning to authoritarian forms of power. “Similar acts reflect the picture all over Europe; and there is something strange with the laïcité in France. It is becoming the object of our narcissistic anxiety,” recalls the sociologist.

Throughout Europe, similar processes are underway. In Spain, the army reacted to last year’s strikes that forced a policy of closure by plotting coups and rehabilitating the leader of the 1936 fascist coup and dictator Francisco Franco. In Italy, banker Mario Draghi is forming a government of “herd immunity,” including both the far-right Lega and the former Stalinist Democratic Party.

For Raphaël Liogier, this narrative shaped a collective paranoia, born out of a narcissistic wound which resulted in imposing an ideology at the expense of Muslim communities. “It is very important for everybody, but it is even more important for Western Europeans because they are used to the idea of being at the center of the world, and this created some kind of a complex. And, anti-Islamism, which exists in some parts of the world, is directly fed, even constructed, through this complex.”