Ending the Confusion over U.S. Withdrawal from Syria

Without admitting a policy failure, the U.S. will not be able to achieve meaningful cooperation with Turkey. That will neither accomplish security and stability on the ground nor help achieve U.S. policy goals in northern Syria. 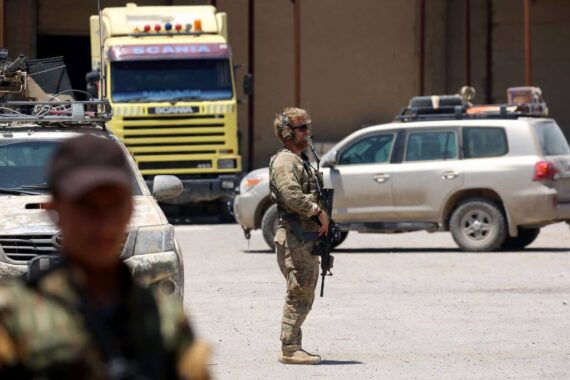 A member of the US forces stands guard during a meeting between US special Presidential Envoy for the Global Coalition to Counter IS and the Tabqa Civil Council in the town of Tabqa, about 55 kilometres (35 miles) west of Raqa city, on June 29, 2017. Getty Images

Wall Street Journal reported over the weekend that the U.S. was planning to leave behind around 1,000 American soldiers after its withdrawal from Syria. The report was quickly denied by General Joseph Dunford, the Chairman of the Joint Chiefs of Staff, for being “factually incorrect.” Gen. Dunford added, “There has been no change to the plan announced in February and we continue to implement the President’s direction to draw down U.S. forces to a residual presence.”

The key wording here seems to be “a residual presence” given that President Trump had initially declared all U.S. forces would leave Syria. After much political pressure from Congress, news reports suggested 200 to 400 U.S. forces would be left behind. However, Joseph Votel, the commander of U.S. Central Command (CENTCOM), declared in February in his congressional testimony, “The fact is the president made a decision, and we are going to execute his orders here to withdraw all forces from Syria.” It is clear from these and other media reports in recent months that there is quite a bit of uncertainty among military leaders about how the U.S. withdrawal is going to be implemented.

U.S. policymakers and military planners have been negotiating with Turkey about creating a safe zone but they have yet to reach an agreement.

How many U.S. troops would remain behind in Syria is actually less important than their mission. U.S. policymakers and military planners have been negotiating with Turkey about creating a safe zone but they have yet to reach an agreement about the main parameters of how such a zone might be established and protected. While Turkey is intent on assuming the responsibility for such a region with the idea that it could start repatriating some of the refugees to the zone, the U.S. has been proposing to involve European allies in protecting the area. Turkey is opposed to this proposal as it sees an attempt to protect the YPG forces once the U.S. forces leave. As the U.S. wants to have its cake and eat it too, Turkey refuses to give any guarantees that it would not conduct military operations against the YPG forces. It would clearly be illogical for Turkey to reassure the U.S. that it will not attack the Syrian branch of the PKK.

The U.S. withdrawal decision was met with much skepticism in Turkey. The distinction between the withdrawal and the support for the YPG had to be made. Withdrawal from Syria did not necessarily mean the end of U.S. support for the YPG. Over the past three months, we have seen that there was a strong willingness especially in Congress to continue to support the YPG. The debate has been framed as whether or not to “abandon” and let Turkey “slaughter” Kurds with U.S. senators like Lindsey Graham pushing back against an immediate withdrawal while trying to reassure Turkish concerns by paying a visit to Ankara. Bilateral meetings between the U.S. Envoy James Jeffrey as well as Secretary of Defense Patrick Shanahan have yet to produce concrete results in terms of creating a safe zone that would satisfy Turkish security concerns.

YPG has been playing a rather smart game by slowing down the anti-ISIS operations to keep U.S. military engaged on the ground as long as possible.

Regardless of how many forces the U.S. will leave behind, the mission assigned to these troops will be the critical issue going forward. YPG has been playing a rather smart game by slowing down the anti-ISIS operations to keep U.S. military engaged on the ground as long as possible. Knowing that the U.S. military leadership is not all that excited about a quick exit from Syria, they also made strategic arguments including the possibility that Russia would be the kingmaker as the YPG would be forced to negotiate with the Assad regime.

Trump administration officials would surely be concerned about how it might look if Turkey conducted military operations against their “allies” the day they depart Syria. In this sense, there needs to be an acknowledgement of the misguidedness of allying with a group like the YPG instead of promoting it as a success story. Without coming to terms with admitting such a policy failure, the U.S. will not be able to achieve meaningful cooperation with Turkey. That will neither accomplish security and stability on the ground nor help achieve U.S. policy goals in northern Syria.