Turkey’s President Erdogan and the leader of the MHP, Devlet Bahceli, made important remarks yesterday speaking to the Turkish public as Turkey is going through historical times both domestically and internationally. 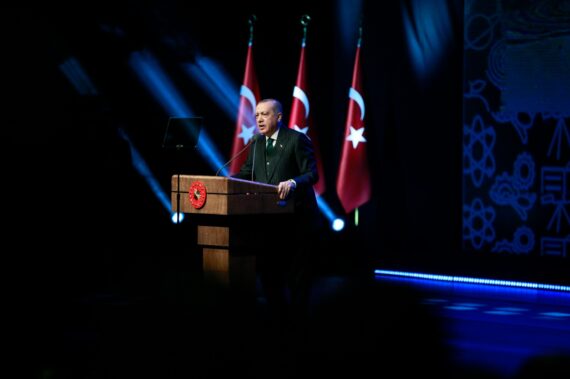 President of Turkey Recep Tayyip Erdogan addresses at award ceremonies for Scientific and Technological Research Council of Turkey (TUBITAK) and Turkish Academy of Sciences (TUBA) at Bestepe People's Congress and Culture Center of the Presidential Complex in Ankara, Turkey on December 26, 2018. Anadolu Agency

Speaking at the award ceremony of The Scientific and Technological Research Council of Turkey (TUBITAK) and the Turkish Academy of Sciences (TUBA) at the Nation Congress and Culture Center at Bestepe, Ankara, President Erdogan made some important comments after celebrating the work and effort of all scientists who had been awarded.

Highlighting the importance of the ‘national treasure’ that will carry Turkey stronger to the future, Erdogan said: “For a long time, we did not open the cover of this ‘treasure’ and benefit from it. For the past two centuries, not just as a country, but also as the Muslim world, we did not reach the success in intellectual studies, production, industry, scientific research, culture and arts. As a result of this, there is a huge impact of the attacks of imperialism on our country and the Muslim world.”

In addition to the sphere of intellectual production, Erdogan added that the Muslim world, which has a population of 1.7 billion, does not even have a permanent member at the United Nation’s Security Council.

“This is why I say ‘The world is bigger than 5.’ This is not far, not in terms of continents, religions, or ethnicities. An answer that comes out of their [permanent members] mouths finalizes everything. There are 194 members; 5 permanent members and they added 15 temporary members along just to raise and drop their hands. There is no meaning. The institution [UN] has been established to bring justice to the world, but this has not been the case. Do not expect or look for any justice from both the Security Council and the UN in general. There is no such thing.”

The Turkish president also added that during the past 16 years, the AK Party administration has managed to dismantle the ‘dependency suit’ that has been forced upon Turkey and its surrounding civilizations for centuries. He added that Turkey has made major improvements in terms of the economy, technology, industry, trade, transportation, democracy, and freedom. With these steps taken, the President underlined that the Turkish nation has increased its faith and self-esteem.

In addition to President Erdogan, during a press conference in Ankara yesterday, leader of the MHP, Devlet Bahceli, also made important remarks and answered questions.

Responding to a question regarding the expected Turkish military operation in the east of the Euphrates, Bahceli stated that Turkey has a keen and determined attitude to wiping out terrorism, which was manifested with its two military operations – Operation Olive Branch and Euphrates Shield – and their successful results.

“The Turkish nation is aspiring the expected military operation in the east of the Euphrates. We also believe that this will take place. With regard to the fight against terrorism, we [MHP] continue to give our full support to the presidential system.”

In his answer to a question on whether it was necessary to start a dialogue with the Assad regime in order to maintain Syria’s geographical integrity and to limit the influence of the YPG/PKK, Bahceli answered, “I’m against any type of dialogue with the Assad regime as a thought. Turkey has walked a long way in the name of fighting terrorism and has paid high costs in this regard. At this point, it would be a shame and a loss for Turkey to give up on this process to the will and choice of Assad.”

Bahceli underlined that saving Syria from the Assad regime had to be done through democracy and that the policies that began in Sochi and continued in Tehran ought to be followed in order to reach a result.

Commenting on the phone call between President Erdogan and U.S. President Trump on December 14, which occurred just before Trump announced his decision to withdraw troops from Syria, Bahceli said that “Turkey has already ripped its shell” and is imposing its strong state tradition to different domains.

Also Read
Ending the Confusion over U.S. Withdrawal from Syria