The National Dialogue Congress aimed at “gathering delegates from various political parties, internal and external opposition, ethnic and confessional groups at the negotiating table” is to be held in Sochi, Vladimir Putin said after talks with the Turkish and Iranian presidents who backed the idea. 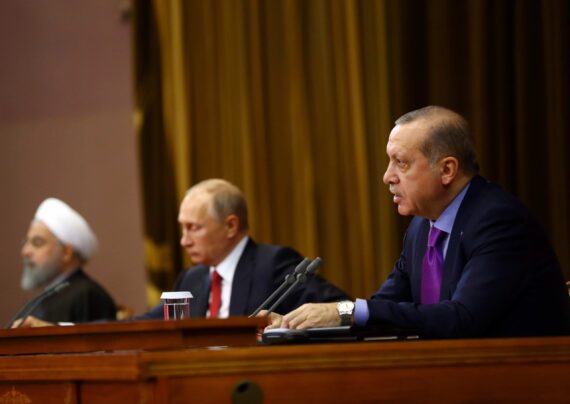 The talks lasted two hours, with Putin saying that they were detailed and included all aspects of the Syrian settlement.

In a joint statement at the summit, three guarantors declared that they would continue to cooperate for the sake of reducing violence in Syria. The three presidents also reiterated their strong commitment to supporting the independence, unity and territorial integrity of Syria.

The guarantor countries also emphasized the confidence-building measures in order to speed up the search for political solutions in Syria.

Fast, secure and continuous humanitarian aid; release of detainees and identification of missing persons were pointed out as the measures necessary.

Turkey and Russia, together with Iran, are the guarantor countries that brokered a cease-fire in Syria in December 2016, leading to the Astana talks, which are running parallel to the Geneva talks for peace in Syria.

President Erdogan said “The world has witnessed the positive results of establishing a close working environment between Turkey, Russia, and Iran on the Syrian issue.”

The talks in Astana, Kazakhstan are the “best example” of this, the Turkish leader added.

He pointed out; “Exclusion of terrorist elements — that target both Syrian political unity and territorial integrity and our country – from the process, will be among Turkey’s priorities.”

Turkey is stating from the beginning that it is against any form of “problem-solving” with the role of terrorist groups PYD, YPG which are PKK’s Syrian affiliates.

Erdogan repeated that Turkey cannot share a platform with any terrorist organization that poses a threat to its national security.

Erdogan referred to the Geneva talks under the auspices of the UN, and said the National Dialogue Congress would contribute to the Geneva process.

President Putin – claiming that the summit was a means to strengthen the territorial integrity of Syria – said the Astana process prevents the division of the country which is now moving towards a “new phase of political solution” and added that he sees the possibility of an end of the war.

He also expressed his gratitude to the Turkish and Iranian leaders for welcoming the idea of holding the Syrian National Dialogue Congress regarding the solution of the Syrian crisis.

“The presidents of Iran and Turkey supported the initiative to convene an all-Syrian forum-congress of the national dialogue in Syria. We agreed to hold this important event at the proper level and ensure the participation of representatives of different sectors of Syrian society,” Putin said after the talks in Sochi on Wednesday.

President Rouhani said “We are pleased to see that the three countries have agreed on Syria’s territorial integrity, independence and unity, and we are in close cooperation to ensure peace and stability in Syria.”

He said that the trilateral meeting is significant in opening up a “new prospect” to settle the situation in Syria.

Rouhani also emphasized that Iran is serious in its fight against international terrorism and is ready to offer help to other countries.

He also reiterated Iranian support for Syria’s territorial integrity and sovereignty, saying there should be no foreign intervention in Syria’s internal affairs “without the consent of the legitimate government of Syria.”

Before the summit with the Turkish and Iranian presidents, Putin met Assad who came to Sochi with an unannounced visit on Monday.

Putin informed Erdogan and Rouhani about the results of his 4 hour long meeting with Assad and about the regime’s “readiness to carry out constitutional reform and stage a free, UN-supervised election.”

Following the talks with Assad, the Russian President held phone conversations with the heads of the US, Israel, Saudi Arabia and Egypt, which made analysts suggest that the violent conflict in Syria could be coming to an end.

Syria has been locked in a civil war since early 2011, when the Assad regime cracked down on pro-democracy protests with unexpected ferocity. This led to the military conflict between the Syrian opposition groups and the Assad regime over the war-torn country’s territory.

Now, in its seventh year, the war in Syria has killed hundreds of thousands of people and displaced more than 12 million, causing a refugee crisis all over Europe and its neighboring countries.