During their meeting at the presidential complex, Erdogan "explicitly" told Tillerson Turkey's priorities and expectations from the U.S. on bilateral ties and regional developments, the source added. 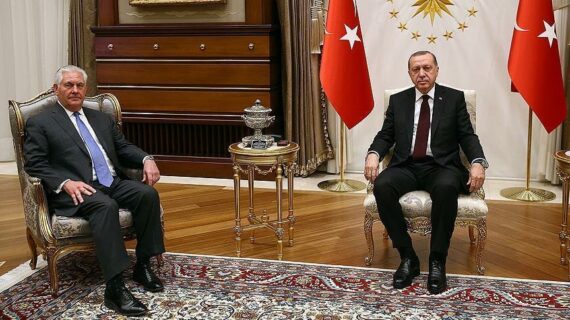 President Recep Tayyip Erdogan and the U.S. Secretary of State, Rex Tillerson, met for over three hours in capital Ankara on Thursday during which they discussed several issues, including bilateral ties and regional developments, particularly Syria and Iraq.

According to a Turkish presidential source, who spoke on condition of anonymity due to restrictions on talking to the media, Erdogan and Tillerson also exchanged views on the fight against terrorism.

During their meeting at the presidential complex, Erdogan “explicitly” told Tillerson Turkey’s priorities and expectations from the U.S. on bilateral ties and regional developments, the source added.

Tillerson is on a two-day working visit to Turkey.

He is expected to meet his Turkish counterpart Mevlut Cavusoglu on Friday to discuss bilateral relations, particularly the U.S. support for the PYD/PKK terrorist group, and international developments. The meeting is expected to be followed by a joint news conference.