President Erdoğan’s meeting with US President Trump was overshadowed by the Pentagon’s decision to provide heavy weaponry to the YPG. Meanwhile, Trump’s mind was preoccupied with rumors of impeachment over allegations his administration shared state secrets with Russian officials. 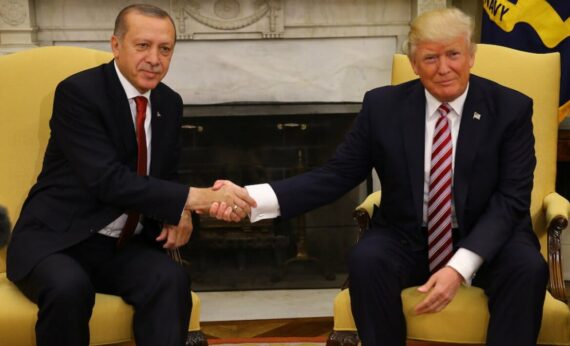 President Erdoğan’s meeting with US President Trump was overshadowed by the Pentagon’s decision to provide heavy weaponry to the YPG. Meanwhile, Trump’s mind was preoccupied with rumors of impeachment over allegations his administration shared state secrets with Russian officials. Some circles in Washington, on the other hand, tried to prevent the one-on-one meeting of Erdoğan and Trump.

The Pentagon’s hasty decision to equip the PKK/PYD with heavy weaponry was due to a possible revision in the planning of the Raqqa offensive after the two leaders’ meeting. There were no substantial changes in the planned Raqqa offensive, which is being coordinated by the Pentagon, but Turkey was able to relay its concerns about the PYD/YPG and the demographic engineering in the region at the highest official level. Turkey was also able to secure certain guarantees about the fight against the PKK, and made clear the fact it would actively continue its fight against the terrorist organization. Moreover, Turkey emphasized that it wouldn’t stand idle as the PKK/PYD, Daesh, and Iran-backed Shiite militias carried out ethnic and sectarian cleansing in the region.

Trump’s statement underscoring the strategic and military partnership between Turkey and the US was crucial. Even though the Turkish delegation returned to the country with a cautious optimism, this statement was perceived as the herald of a new era in Turkey-US relations, which had been on the decline since May, 2013. No one was expecting all the issues between the two countries to be resolved in an instant, but the image of the two leaders standing side by side was interpreted as the beginning of a more promising period for bilateral relations.

This was not the only indication that the level of understanding and cooperation between the US and Turkey could be on the mend.

The normalization in relations between Turkey and Israel, which had been in a crisis since the Mavi Marmara incident, will cause a gradual change in how Turkey is perceived both by the Trump administration, which has been especially sensitive on the issue, and circles that are associated with the Israeli lobby in Washington, which have advocated anti-Turkey sentiments for some time now. While Turkey will continue to advocate for the basic rights of the people of Jerusalem and Palestine, it will be more careful to avoid tensions with Israel. There are concrete efforts to increase the common interests of the two countries, especially in energy, tourism and trade.

Another issue that both Turkey and the US converge on in this new era is Iran’s expansionist policies in the Middle East. In particular, Iran-backed militia forces which are trying to gain ground using a sectarian discourse and ideology are posing a threat to the interests of many countries and local elements in the region. Checking these militias, whose presence is rationalized as a necessary counter to Daesh, brings Turkey, the US and many other countries in the region on common ground.

Enclosing Sunni countries with a “Shiite crescent” – a policy that was covertly endorsed by the Obama administration to limit the Sunni governments in the region much to the chagrin of traditional allies like Turkey, Saudi Arabia, the Gulf countries and Israel – is no longer sustainable. The Trump administration, which is yet to take over the control of security and foreign policy from the Obama administration’s military and civil bureaucrats, will realize that cooperation with Turkey could yield more effective results than surrounding the country with terrorist organizations like the PKK/PYD and Shiite militia forces.

Turkey’s success in Operation Euphrates Shield already debunked the myth that the PKK/PYD is the most effective force in the fight against Daesh. If Brett McGurk, the US envoy to the coalition against Daesh, and an Obama administration appointee who has built his own career on the an alliance with the PKK/PYD, and certain CENTCOM officials take a step back, the permanent and constructive possibilities of coordination with Turkey will become more apparent.  Turkey can provide a solution that is sustainable given the region’s sectarian and ethnic patterns, unlike the PKK/PYD, which has only sought to exploit these dangerous fault-lines.

The US’s persistent support to the PKK/PYD is antagonizing moderate Syrian Kurds who are being dominated by the terrorist organization, along with Arabs in Northern Syria who have been forced from their own lands, not to mention Washington’s own ally, Turkey. If the Trump administration is to adopt a controlled chaos strategy in the Middle East, just like the Obama administration, instead of an orderly one, they can continue their alliance with PKK/PYD; however, if the US wants to stabilize the region and win over the allies it has offended, they have to widen their narrow perspective. In this respect, Erdoğan and his team went to Washington with a comprehensive plan.

Another development which may cause the Trump administration to revise its relations with Turkey is the level of popular support President Erdoğan has demonstrated through the constitutional amendment referendum. Certain circles in Washington have been trying to prove that Erdoğan has little support and will not remain in office long, a campaign that began with the Gezi Park Protests in May, 2013. Having emerged with the clear support of the people both in the July 15 coup attempt and the April 16 constitutional referendum, Erdoğan has shown that he is has the backing of Turkey, and he is not going anywhere. Decision makers in Washington, along with leaders of other countries will have to acknowledge this sooner or later.

Erdoğan, at his meeting with Trump, expressed a sincere hope for more cooperation between the two countries, while also highlighting Turkey’s concerns on the road to normalization. Ankara is eagerly waiting to see how Trump will respond to its call. It is still not clear whether the relationship between the two countries is to become strategic in terms of regional politics. Another question that the whole world anxiously awaits the answer to is whether Trump will be left standing after his ongoing power struggle with the Washington establishment.