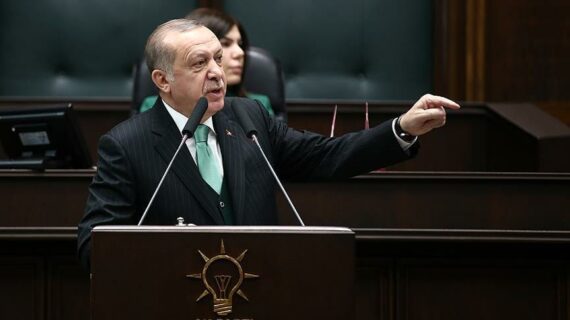 The president said the “lasting” security of the region was of “utmost” importance for Turkey.

“Afrin city center will be besieged in the coming days,” he said. “So that the external aid coming to the city and the region gets cut.”

Erdogan highlighted that Turkey would make its red lines clear to everyone.

According to the Turkish General Staff, the operation aims to establish security and stability along Turkey’s borders and the region as well as protect Syrians from oppression and cruelty of terrorists.

The military also said only terror targets were being destroyed and that “utmost care” was being taken to not harm civilians.

Erdogan said Turkey had launched the military operation as a last resort and for a compelling reason.

“We had been waiting for the threat coming from terror organizations in Syria to be prevented through the country’s own dynamics and the international coalition,” he said.

“[But] we have seen that the threat has increased, not decreased, and harmed us in our own territories when it crossed into our borders. There was no other option but to launch an operation.”

He said Daesh-based terror attacks also disappeared from Turkey after the operation.

“The same thing will happen in Afrin, Idlib and Manbij as well; it will also happen [in areas] from Tal Abyad to Qamishli along our borders.

“Both for the future of our brothers there and for the security of our country, our fight will continue in the entire region until the last terrorist dies.”

Operation Euphrates Shield began in August 2016 and ended in late March 2017 to improve the security, support coalition forces and eliminate the terror threat along the Turkish border.

Under the operation, approximately 2,000 square kilometers (772 square miles) of territory was freed from terrorists and transformed into safe zone for residents.

Erdogan commemorated the 1992 Khojaly Massacre in which 613 Azeri citizens were killed in occupied Karabakh.

“If there is someone who looks for a wild massacre in the world, then this massacre is in Khojaly,” said Erdogan.

Erdogan said that one of the biggest persecutions in the human history took place in Khojaly 26 years ago.

“Have you ever heard a country in the world which demanded or conducted sanctions against the perpetrators of Khojaly Massacre by mentioning the human rights,” said Erdogan.

“We will never forget Khojaly Massacre… We will always remember the human crimes committed against our brothers in Khojaly.”

The massacre of Feb. 25-26, 1992 is regarded as one of the bloodiest and most controversial incidents of the war between Armenia and Azerbaijan for control of the now-occupied Upper Karabakh region.

On the heels of the Soviet Union’s dissolution, Armenian forces took over the town of Khojaly in Karabakh on Feb. 26 after battering it with heavy artillery and tanks, assisted by an infantry regiment. When the massacre happened, the population of the town was more than 11,000.

The two-hour offensive killed 613 Azeri citizens, including 116 women and 63 children and critically injured 487 others, according to Azerbaijani figures. One hundred and fifty of the 1,275 Azerbaijanis that the Armenians captured during the massacre remain missing.

Also Read
Iran and the YPG: Friends or Foes?
We use cookies to optimize your online user experience. To learn about our use of cookies and how you can manage your cookie settings, please see our Privacy Policy. By continuing to use our site you are excepting our use of cookies.Accept Cookies & CloseMore Info