The Dutch border police can use ethnicity as a criterion for selecting citizens for checks at the border. To the Netherlands' court this is constitutional. 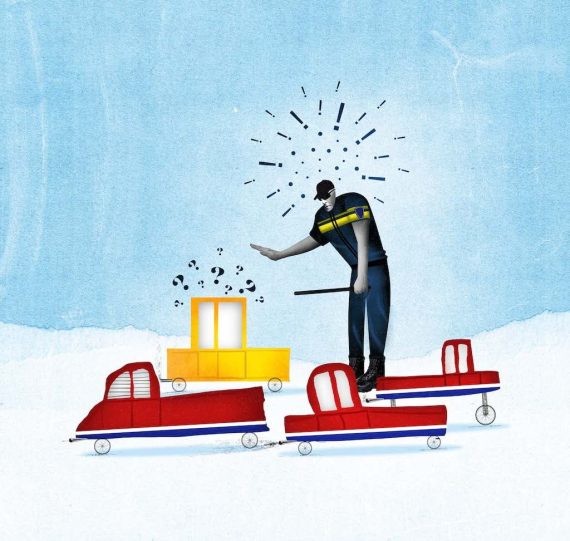 "Pull your car over" is a well-known phrase for the people of color in the Netherlands. Illustrated by Onur Askin for Politics Today.

According to a decision by the District Court of The Hague, the Royal Netherlands Marechaussee, which is the Dutch border police, can use ethnicity as a criterion for selecting citizens for checks at the border. As stated by the court, this does not constitute discrimination.

The case was brought against the government by several human rights organizations, NGOs such as Amnesty International, Controle Alt Delete, RADAR, and PILP-NJCM, and two citizens. These organizations were convinced that two citizens were singled out for checks by the Royal Netherlands Marechaussee officers because of the color of their skin. One of the persons, Mpanzu Bamenga was taken aside by the Marechaussee at the airport of Eindhoven in April 2018.

Mpanzu Bamenga, who is a municipal councilor of the social liberal political party D66, had just returned from Lampedusa, Italy, where he gave a lecture about institutional racism, human rights, and how to create a world in which all human rights are secured for all humans. After the councilor’s efforts to understand why he was taken aside and filing a complaint followed by a hearing, it seemed Bamenga had been arrested for being “well dressed,” “walking fast,” and having a “non-Dutch appearance.” According to the coalition that filed the lawsuit, this is a form of discrimination that violates human rights and Dutch law.

Dagmar Oudshoorn, director of Amnesty International Netherlands, stated the following about the court’s decision: “According to this ruling of the court, the Royal Netherlands Marechaussee can continue with ethnic profiling. This is not only in violation of international human rights, but also of Article 1 of the Dutch Constitution.”

During border checks, the Marechaussee selects people based on their appearance, skin color, or ethnicity. These parameters determine whether someone, against whom there is no individual suspicion, is pulled aside. The Marechaussee also uses risk profiles that include ethnicity, such as in Bamenga’s case “men who walk fast, are well-dressed and who look ‘non-Dutch.’”

Read: Anti-Turkey Cartoon by Geert Wilders Has a Backstory in the Netherlands

All in all, the ruling of the court means that ethnicity can remain part of the risk and selection profiles of the Royal Netherlands Marechaussee – a decision that undoubtedly encourages discrimination.

Following the court’s decision, the anti-racism foundation Controle Alt Delete started a petition to denounce the assumption that Dutch nationality is linked to white skin color.

“In the super-diverse Netherlands in 2021, skin color is not an indication of someone’s nationality,” says Controle Alt Delete on its website. In addition to people with a refugee background and people from the former colonies, the Netherlands also has several communities that settled in the country from various parts of the Mediterranean four generations ago.

“Pull your car over” is a common phrase frequently used towards colored, Muslim, or people with a non-Western migration background.

Pull your car over

“Pull your car over” is a common phrase frequently used towards colored, Muslim, or people with a non-Western migration background. In fact, however, the Netherlands is known for its multicultural society formed as a result of colonialism and colonialism-related migration. There are people here from all over the world that makes it hard, if not nearly impossible, to define “Dutchness” and associate it simply with skin color.

The postcolonial migration flows to the Netherlands from the Dutch East Indies, the Dutch Antilles, and Suriname, the labor migration from Turkey and North African countries, the arrival of refugees from Bosnia and the MENA region make it impossible to define Dutch identity with racial features.

Immigrants nowadays growingly fall victim to acts of over-scrutiny, discrimination, or hate crimes. According to a report published in 2020 by Bureau Beke, an independent agency that specializes in research and advice in the field of security issues and crime, only in Amsterdam, more than half of the residents have experienced ethnic profiling during contact with the police.

According to the report, significant differences occur between two subgroups. On the one hand, there are the citizens with a Dutch or Western migration background, and on the other, the citizens with a non-Western migration background. The second group gives a lower rating for the general way of being addressed by the police and their trust in police officers. According to the report, citizens with a non-Western background are significantly more likely to indicate they have had contact with the Amsterdam police up to 10 times within a period of six months.

The situation in Germany is no different. According to an answer from the Ministry of Interior in response to a parliamentary question by a German representative, the German police conducted ID checks 2,953,844 times without valid reason in 2015. Critics argue that most of these controls are arbitrary and skin color and ethnic background are the two main criteria behind them.

Third-generation Turkish immigrants, born and raised in the Netherlands, also face racial profiling as it frequently occurs within their minority communities as well. It seems that Western European countries, where once multicultural society was a debated issue, are now struggling with “us” vs. “them” ideology.

By constantly keeping the criminality of “foreigners” or young citizens with an immigration background on the political agenda and in the media, and therefore in the public eye, the Other, the “non-Dutch looking” Other, is created and perceived as a threat. Institutions and authorities, with the police at the forefront of this discrimination, are motivated to believe that it is legitimate to monitor, scrutinize, and control people based on their religious difference, appearance, or skin color in order to protect “national security.” However, ironically and conversely, they are actually fabricating this imagined threat themselves.

Ahmet Turan pursued his bachelor at the Rotterdam University of Applied Sciences. He is currently working in the field of environmental sustainability through recycling. Ahmet Turan is committed and passionate about community building and the non-profit sector. His main fields of interest include religious advocacy, minorities in European societies and diaspora research including the processes of culturalization and assimilation of Turkish immigrants in the Netherlands.