The centrifugal forces in the EU are increasing and among the integration and enlargement dynamics of the EU, whether it be the North-South, East-West, Mediterranean-North, Widening-Deepening, Franco-German axes, the geopolitical fault lines were always present in the EU. 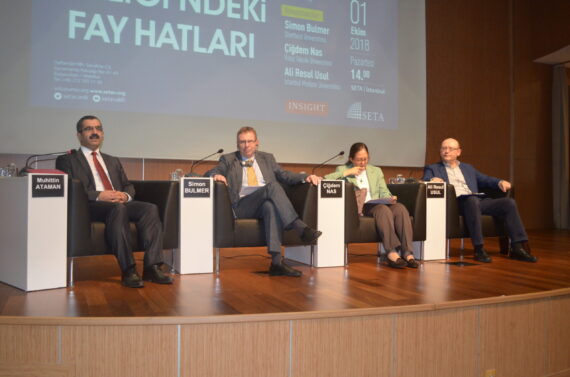 The panel titled "EU and its Fault Lines" was moderated by Muhitttin Ataman, Editor of Insight Turkey, and keynote speakers who gave insight were Simon Bulmer from University of Sheffield, Çiğdem Yas from Yıldız Technical Univeristy and Ali Resul Usul from Medipol University.

On Monday, SETA in collaboration with one of its key publications, Insight Turkey, has organized a panel titled “EU and its fault lines”. The panel discussed the main dynamics shaping EU policies, the emerging regional actors and the influence of new World powers steering the currents in & around the EU. After each issue, Insight Turkey organizes a panel in accord with the themes of its latest issue, this panel followed its latest EU special edition focusing on the EU and featured three panelists authoring the journal as well as a guest keynote speaker.

The panel was moderated by Muhitttin Ataman, Editor-in-Chief of Insight Turkey, and keynote speakers who gave insight were Simon Bulmer from University of Sheffield, Çiğdem Yas from Yıldız Technical Univeristy and Ali Resul Usul from Medipol University.

Simon Bulmer discussed the rising position & role of Germany in a post Brexit EU. He covered the various challenges posed by a number of EU crises, the politicization and the breakdown of domestic crises and the outlook for Germany. He underlined that German power was always focal for European integration. From a historical perspective, European integration was partly important for managing and handling German power following the Nazi regime. Germany has had a pivotal role in handling various crises over the last decade including the Eurozone crisis, the Ukraine crisis, the Refugee crisis and the shifting dynamics in the wake of Trumpian politics amid an existing leadership crisis within the EU, EU’s struggle for democratic legitimacy and the rise of populism and anti-elitist sentiments that harbor Eurosceptic reactions.

Discussing the biggest foreseeable effects of Brexit, Bulmer noted that Germany will be much more exposed and be forced to take on a bigger responsibility with the loss of Britain, a major liberal trade ally, a leading EU budget contributor, and an important global player from the EU. “I have two main projections, two possible scenarios: Franco-German relations can gain momentum and revive. Or perhaps Germany can emerge stronger as a potential hegemon in the EU. It has the structural power but lacks the diplomatic leadership due to its domestic politics. And perhaps another option is the slow disintegration of the EU.” Bulmer noted.

Çiğdem Nas discussed the latest developments and crises in the EU, the effects of these crises on the EU-Turkey relations and whether a phase of normalization in bilateral relations was foreseeable. Since the 90s EU has been facing crises which are ongoing and still unresolved. In the beginning of 2000s where there was a peak in relations with Turkey, there was an optimistic outlook from an EU perspective since the EU at the time felt more optimistic of its own future. Çiğdem Nas underscored that the candidacy offer to Turkey may perhaps even have been based on the fact that EU at the time had less internal problems and the power to cope with and manage its existing problems. But later, especially after the 2005 veto of France and Holland on establishing a Constitution for Europe following local referendums, the public opinion was particularly telling in terms of the rise of Euroscepticism and there were doubting questions raised on the prospect of a more integrated and plausibly a Federal Europe.

Prof. Nas added that the 2008 global financial crisis that took a toll on Greece, the Ukraine-Russia tensions, Russia’s expansionist policies and refugee crises have all respectively triggered concentric pressures on Europe. EU’s internal problems and the weakening of mainstream parties who played a pivotal role in determining EU policies have had a direct impact on the enlargement process including the prospects for Turkey. “Turkey plays a crucial role in the refugee crisis and considering its failure to resolve this crisis, EU should comprehend the value of Turkey for its own interests” said Çiğdem Nas. Although many reports have argued that Turkey is allegedly distancing itself from EU principles, it is starkly evident that EU isn’t taking the necessary steps to keep Turkey close.

Ali Resul Usul discussed the Chinese influence since the 2000s and underscored that there is a crucial China factor that must be taken into consideration and that the new Belt and Road Initiative will have multifold effects on EU and that EU’s reaction to  these forces is unforeseeable as of yet. “I claim that China as a global power has direct impacts in the EU, especially in southeastern Europe and western Balkan countries which is manifesting itself more evidently over the recent years and can spread further thus forming a new fault line within the EU” said Prof. Ali Resul Usul.

Prof. Usul emphasized that the EU project is a homogenizing project and that currently there is a certain level of homogeneity in itself. EU’s general motto is “United in diversity”. “There is an emphasis of plurality but there are also frictions and evident tensions between the homogenizing and disintegrating or centrifugal forces and centripetal forces. These tensions have been inherent ones and have existed since the onset of the EU” Prof. Usul noted.

The recent developments have had benefits especially for the centrifugal forces, Prof. Usul argued. The centrifugal forces in the EU are increasing and among the integration and enlargement dynamics of the EU, whether it be North-South, East-West, Mediterranean-North, Widening-Deepening, German-Franco axes, the geopolitical fault lines were always present. In 2004, the new fault lines and the existing fault lines became more complex with the significant enlargement. Many decision-making processes became difficult. “France didn’t want the integration of the eastern Balkan states, since France feared the natural and gradual shift in the centripetal force of the EU towards the East and despite its strong and continued resistance it had to eventually face what it feared”, said Prof. Usul.

Today, since the 2004 enlargement of the EU, the largest enlargement to date, there have been significant tensions with regards to integration between central and eastern EU states due to several factors: the financial crisis, the questions posed by the post Brexit phase, rising xenophobia and anti-refugee sentiments and EU enlargements which have all fueled Euroscepticism and strengthened centrifugal forces.

Following and amid these tensions, a global power, namely China enters the stage, Prof. Usul highlighted: “China has increased its influence in southeastern Europe, central and eastern Europe, the Mediterranean and a large part of the Balkan states and even candidate states and in turn these states have been bolstered to leverage on this Chinese influence and activities in the region utilizing this new gained strength against the centripetal European forces.”

The Belt and Road Initiative is a new and very significant issue with global ramifications but it is still too early to make clear-cut predictions since the Chinese authorities have not published any specific and definitive details of the project. While the EU currently has its hands full with local problems, it still hasn’t formulated a tangible policy to handle this Chinese influence. While on the one hand it welcomes foreign investments including Chinese investments, on the other hand it is still warily suspicious of China’s deeper intentions.