What does the EU aspire to achieve in Libya? 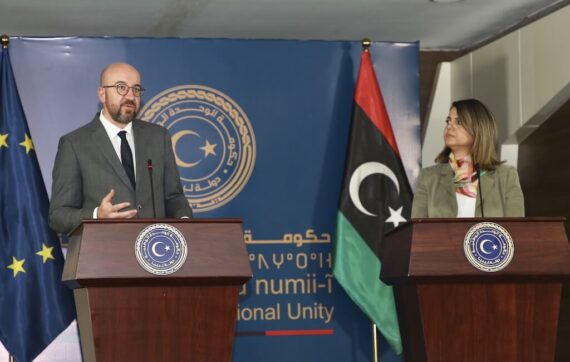 In recent weeks, Tripoli has seen a steady stream of visits by European officials after the Government of National Unity (GNU) won the confidence of the Libyan parliament to lead the country to elections in late December of this year.

At a time when the new Libyan government is rejoicing in a diplomatic watershed – illustrated by the intense schedule of visits to Tripoli by foreign dignitaries – the need for EU members to boost relations with Libya is already emerging as one of the most acute foreign policy challenges. Greek Prime Minister Kyriakos Mitsotakis’ visit to the Libyan capital on April 6, demonstrated the difficulty of this task.

“Let those who tried to question our relations in the past stay back,” said Mitsotakis during his meeting with his Libyan counterpart, Abdel Hamid Dbeibah, who was appointed in February to head the new Government of National Unity bringing together representatives from the west and east of the country for the first time since 2014.

In 2019, Faiz al-Sarraj’s Government of National Accord (GNA), backed by Turkey, had driven General Haftar’s forces out of western Libya. To further the cooperation and in exchange for vital support for the GNA, al-Sarraj signed two memoranda of understanding, “The Security and Military Cooperation” and “Restriction of Marine Jurisdictions,”  with Turkish President Recep Tayyip Erdoğan in Istanbul on November 28, 2019.

Mitsotakis asked Tripoli “to cancel the illegal documents presented as agreements between states when they have no legal value.” But days after his short visit, Erdoğan and Dbeibah reaffirmed their commitment to the “Restriction of Marine Jurisdictions” agreement.

This angered some of their neighbors in the Eastern Mediterranean as well as some EU members who were willing “to circumvent the agreement if it cannot be cancelled” as a European diplomat told Le Monde. Erdoğan and Dbeibah also signed numerous agreements following one-on-one and inter-delegation talks.

Read: Where Does Libya Fit in Biden’s Foreign Policy Priorities?

As a part of the continuous parade of visits of heads of government to Libya, with some of them eying the reconstruction of the country, Italian Prime Minister Mario Draghi chose to make his first ever foreign visit to Tripoli. No Italian head of government had been to Tripoli since January 2012 and the visit’s symbolic significance makes it a geopolitical event. “It is as if Macron, just elected, went to Algiers” as Jean-Pierre Darnis, a French professor of international relations, put it. Darnis views Drahgi’s visit as part of a poorly digested colonialism in which Rome still sees itself as the savior of Libya.

Italian Foreign Minister Luigi Di Maio said that Italy and the United States have “a common concern about the presence of foreign forces, both Russian and Turkish, in Libya,” meaning that there is a perception of “stronger” cooperation between the two countries on this matter.

Europe has recently shown interest in the upcoming elections in Libya.

During a meeting in Washington on Monday with his U.S. counterpart Antony Blinken, the two officials discussed the importance of the “full implementation of the ceasefire in Libya and the holding of elections [scheduled for December 24] on time.”

Europe has recently shown interest in the upcoming elections in Libya. Last month, the Libyan High National Electoral Commission held a meeting attended by foreign ministers from Italy, Germany, and France. The commission said the ministers “continued to support the commission in carrying out the elections scheduled for December 24 of this year.”

On Tuesday, French Ambassador to Libya, Béatrice Le Fraper du Hellen, signed an agreement with Gerardo Noto, the resident representative of the United Nations Development Program (UNDP) in Libya, by which

France pledged to contribute one million euros to support the UNDP project “Promoting Elections for the Libyan People,” bringing the total funds contributed by France to the said project to 1,850,000 euros. This is particularly interesting after France backed General Haftar with military support during his 2019 attempt to take over Tripoli.

In many ways, Libya presents unparalleled benefits to EU members and the ongoing EU diplomatic efforts are proof of Europe’s interest in the political upturn in this neighboring country after a decade of chaos.