It is time for Libyans to handle their problems internally on their own. The existence of various actors and military groups in the country might adversely affect the transition process. 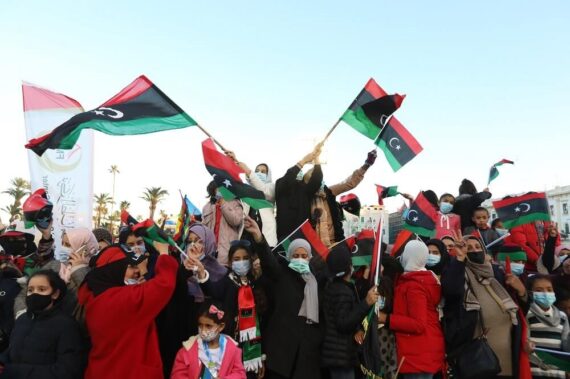 Experts discussed the possibility of a peaceful transition in Libya at an online panel organized by SETA Brussels entitled “Libya’s Political Transition Process,” on February 23, 2021. Libya’s political transition process, the role of external powers, and possible future scenarios for the country were among the topics discussed.

Claudia Gazzini, an analyst at the International Crisis Group in Libya, outlined the efforts by the United Nations to create an interim government by uniting the two governments in Tripoli and Tobruk, boost dialogue, and end the ongoing civil war. Based on the current political events taking place in Libya, Gazzini was optimistic about progress in the country. She noted that “running transparent elections where candidates freely competed and accepted election results was an unprecedented step” and something new on the Libyan political scene.

During the panel, Gazzini emphasized the need to have trust in the cabinet and the House of Representatives. Rich in resources such as oil, all Libyans would benefit from a single unified authority in control of the state in the form of an elected government. Gazzini emphasized how revenues from hydrocarbon production and oil exports can be used productively by the government, once formed.

Francois Burgat, emeritus director of research at the French Center for Scientific Research and a senior research fellow, political scientist, and expert on Arab affairs, shed light on the role of external actors in Libya, especially the United Arab Emirates, and the geopolitical importance of Libya after the Arab Spring.

Tarek Megerisi touched on the internal dynamics of the political transition process in Libya. A heavily divided country, torn between warring governments and competing groups, does not give a positive impression for the future. Internal conflicts need to be settled for a country to progress, he stressed and continued, in Libya, reality makes it clear that having a dynamic field with several external actors leads to a relative pessimism regarding the transition.

There is a need for Libyans to organize themselves, select a representative party, and have free elections.

Murat Aslan noted that the scene in Libya is rapidly changing and evolving. The problem does not lie in forming a government, but rather in maintaining stability. This means that there is a need for Libyans to organize themselves, select a representative party, and have free elections. “Some challenges are posed by internal and external groups that might be expelled from the dialogue, which requires cautious steps while addressing the various interests of the different parties,” Aslan concluded.

Read: Government of National Unity: Where Does Libya Go from Here?

When asked about the political dialogue in Libya, Gazzini reflected on the lack of common understanding among Libyans of the political process. The fact that there are representatives appointed by an external body, namely the UN, alongside the State Council and other 13 representatives, leaves Libyans without a clear road map for the coming elections. This suggests a better reconciliation of efforts to guide the country through its transition period. Certain external parties, such as Turkey and Europe, could be a great support to Libya in ensuring the proper launch of its economy.

In Burgat’s opinion, the UAE seems to be fighting its opponents rather than acting as a regional leader in the place of Egypt. “Political Islam” is a term coined  to signify “the enemy of democracy” by leaders such as Egypt’s president Abdel Fattah al-Sisi or the UAE’s Mohammed bin Zayed. They both use the term repeatedly in their speeches and come together to fight a single opponent – the Muslim Brotherhood. The Muslim Brotherhood by and large is seen as the representative of “political Islam.”

The Libyan situation has seen the involvement of different actors such as the EU, Turkey, France, Egypt, the UAE, and Saudi Arabia. France might need to revise its strategy in the Middle East, especially under Emmanuel Macron, considering the tolerating of caricatures that mock Prophet Mohammed and cause offense to Muslims, and Macron decorating Sisi with the Grand Cross of the Legion of Honor in 2020, despite all the allegations made against the Sisi regime and its violations of human rights.

Maybe it is time for Libyans to handle their issues internally with the help of friendly countries and bodies. In fact, it is in the country’s best interest to handle its problems on its own, without external interventions. The existence of various actors and military groups in the country might adversely affect the transition process. Do Libyans lack trust in officials appointed by external institutions such as the United Nations? The truth is that they do not trust the intentions of countries such as France which supports Haftar and Sisi – the latter being the former U.S. President Donald Trump’s “favorite dictator.” Only time will tell.