Now more Europeans think that the EU’s aim to be the first carbon-neutral continent by 2050 is once again hampered by national interests. 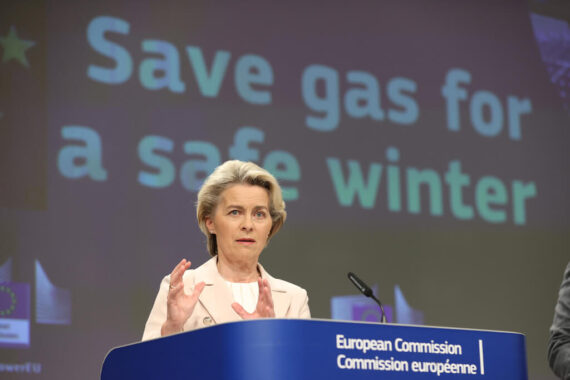 President of the European Commission Ursula von der Leyen makes statements during a joint press conference on the "save gas for safe winter" package after college meeting attended by EU Commission members in Brussels, Belgium on July 20, 2022. Photo by Dursun Aydemir, Anadolu Images

The European Union is in a tight corner. This is both due to the climate change and its effects, and to the security of energy supply. At a time when the world was struggling with agreeing on measures to tackle climate change, the COVID-19 pandemic and the following outbreak of the Russia-Ukraine War severely impacted global energy markets and supply chains.

Energy prices, led by oil, decreased to record-low levels as the pandemic pushed states to lockdown. But in the second half of 2021 with the increase in economic activities following the weakening of the pandemic, demand and prices began to go up. And the Russia-Ukraine war made everything even harder.

The EU’s Ambitious Task: Being a “Pioneer” in Global Climate Action

The EU has a complicated relationship with fossil fuels. The union owes its establishment to one of the mostly used and dirtiest fossil fuels: coal. At the same time, debates on how to reduce the use of fossil fuels have been going on since the 1960s. As climate change was brought to the global political agenda, the European Union positioned itself as one of the major actors encouraging the international community to take measures.

The executive arm of the union, the European Commission, tried hard to form a union-level climate policy after the signing of the UN Framework Convention on Climate Change (UNFCCC). In fact, the union’s effort was more tangible when the Bush administration withdrew from the Kyoto Protocol in 2001. The U.S. pullback created an opportunity for the EU and it redefined itself by setting a super ambitious goal: being a “pioneer” in global climate action.

In 2009, the EU made its first ever ambitious move, namely the European Union Climate Change and Energy Package directive, which is famous for its 20-20-20 targets, passed by the EU. The directive sets out to (1) reduce greenhouse gas emissions by 20 percent from the 1990 levels; (2) improve energy efficiency by 20 percent; and (3) raise the share of renewable energy resources in total energy consumption by 20 percent. The package was followed by a number of climate and energy policy proposals prepared by the commission, and now the EU has the “European Green Deal,” which ambitiously sets the target for Europe to be the first net-zero emission continent.

The Russia-Ukraine War: A Wake-up Call for the EU

The Russia-Ukraine war just entered its sixth month. Since the beginning of the war, the EU, as the largest market of Russian energy, has been trying to spin its Russian energy imports around. However, a first-time global energy crisis faces the union. The policymakers already passed six sanction packages and only the last two could cover energy embargoes, which will be in force for coal imports as of August and seaborne oil starting from the end of the year, while no gas embargo has yet to be agreed upon. The EU’s greatest weakness is its supply of natural gas.

Since Russia’s annexation of Crimea in 2014, the EU has aimed to reduce its dependency on Russia, especially for natural gas imports. Yet, it has become even more dependent on Russian gas supplies due to Russia’s geographical proximity and rich energy resources, as well as the union’s views of natural gas as a “transition fuel” to a low-carbon economy. Many European governments planned to increase the use of gas to compensate for phasing out their dirtier coal usage. Nevertheless, Putin’s Russia is no longer a reliable energy supplier for the EU.

Time for an Immediate Climate Act, But How?

The effects of climate change are getting worse, and the Mediterranean region is suffering more and more. The average temperatures in the summer season have risen to record-high levels all around Europe. From London to Paris, most weather forecast bodies have announced the temperature will hit above 40 degrees Celsius for the first time ever. Not surprisingly, the extreme heat waves pose a real threat. Hundreds of heat-related deaths and many wildfires have already been reported in recent months. As one of the leading polluters and victims of climate change, the EU now has to take immediate action. However, the Russian invasion of Ukraine and the global energy crisis have shackled the union, and its recent effort to greenwash fossil gas seems unlikely to succeed.

Natural gas, or fossil gas as some Europeans call it, is used to heat homes, generate electricity, run factories, and produce fertilizer. It is also a transition fuel for economies to become low-carbonized, but at the end of the day, it is a fossil fuel and emits greenhouse gasses. The EU has to reduce its gas consumption to slash its emissions by 55% by 2030 compared to the 1990 levels and become the first carbon-neutral continent in the world by 2050.

Moreover, coal and natural gas are not the only energy resources that the Europeans plan to rid themselves of. Many EU members led by Germany and Austria set to phase out nuclear power as well. Although nuclear power provides zero-emission electricity and a sustainable power supply, the environmental and safety concerns of the Europeans affect their positions. Yet, the union needs gas and nuclear power more than ever, and the Russian gas disruptions are pushing the EU to take measures.

On June 6, 2022, the EU made a historical decision: members of the European Parliament voted on a controversial plan to label fossil gas and nuclear power under the “green taxonomy,” which is a classification system establishing a list of environmentally sustainable economic activities. The system is planned to create security for investors and help companies become more climate friendly. By adding natural gas and nuclear power to the green taxonomy, the MEPs agreed to call them “green,” thus considering gas and nuclear powers as eligible for sustainable investment funding from 2023. The act is now waiting for the council’s backing, and if this happens, member states should quickly provide their approval.

Germany, which is heavily dependent on gas, and France, which benefits most from nuclear power, are expected to accept the act first to make their transition to a low-carbon economy smoother by taking advantage of green finance. States that use more coal, like Poland, also support the act since it foresees investing billions of euros into the new gas-fired power plants that would replace the coal-fired ones.

Yet, the decision is controversial. Eight member states are against it, and they have diverse motivations for doing so. States like Luxemburg and Austria do not support the act and argue that only a few member states have environmentally secure nuclear reactors and only they would develop new ones. Others, such as Denmark and Spain, claim that this move would violate the union’s position on global climate action since it will pave the way for increasing its emissions over the tolerable limits. Ultimately, more Europeans are thinking that the EU’s aim to be the first carbon-neutral continent by 2050 is once again hampered by national interests.