There are three reasons that prevented the European public from displaying a negative approach towards the Ukrainian refugees. 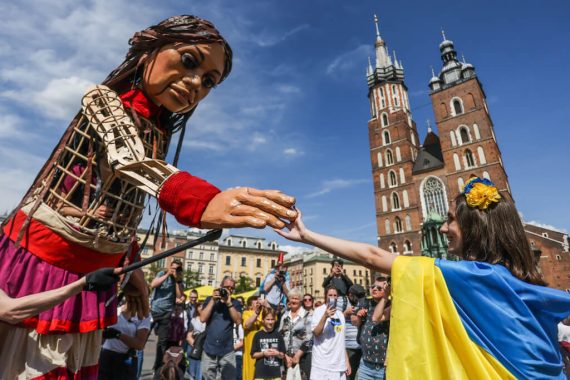 Little Amal, a 3.5-meter-tall puppet of a young Syrian refugee girl greets Ukrainian people while walking through the Old Town in Krakow, Poland on May 13, 2022. Photo by Beata Zawrzel, Anadolu Images

With the invasion of Ukraine by Russia, the safety of the Ukrainian people has been endangered. As a result, the United Nations Human Rights Council (UNHCR) estimates that more than 7.7 million Ukrainians have been internally displaced in their country. Moreover, as of May 23, more than 7.5 million Ukrainians have had to take refuge in neighboring countries—including Russia—for international protection in order to secure their lives.

If the war continues, the number of Ukrainian refugees and asylum seekers in Europe—including those in Russia—, which currently exceeds 7.5 million, is expected to reach 8 million by the end of June. This indicates that Europe as a whole is facing a much bigger crisis than the irregular mass migration crisis it experienced in 2015.

It should be noted that since Poland, Romania, Hungary, and Slovakia are EU members, nearly two million Ukrainians have moved to other member states on their own will or within the scope of temporary protection programs announced by the EU. According to the official statements made by some EU member states on different occasions, Germany has received 715,000 Ukrainian refugees, the Czech Republic 330,000, Bulgaria 270,000, and Italy 120,000.

Read: The United Kingdom and Denmark intend to Relocate Refugees to Rwanda

Another indicator that shows that European countries have been embracing Ukrainian refugees is the official protection programs. This includes temporary protection mechanisms that the EU has started to implement. This mechanism in progress is based on the Temporary Protection Directive adopted by the EU in 2001.

With this mechanism, which offers a temporary solution in the periods of irregular mass migration, Ukrainians are allowed to obtain a residence permit in the EU countries, to benefit from education and health services, and to work in various ways according to the national legislation of the member countries. Moreover, the EU has accepted to pay €3.5 billion as part of the Recovery Assistance for Cohesion and the Territories of Europe (REACT-EU), and €4 billion credit line as part of the Ukraine Solidarity Package in advance to member states to help them welcome and accommodate Ukrainian refugees fleeing the war.

The EU’s temporary protection application, which has been used for the first time since 2001, is actually a significant step towards a more humane protection regime and fairer responsibility-sharing among the EU member states. It is also a move away from the strict Dublin Regulation which puts an official pressure of hosting refugees on the first entrance countries.

The mechanism will remain in force for one year at the first stage, but may be extended for a total of one additional year. In addition, since there is a visa exemption between the EU and Ukraine since 2017, Ukrainian citizens have the opportunity to stay in EU countries up to 90 days upon arrival.

There are three main reasons that have prevented the European public from displaying a negative approach towards Ukrainian refugees at least for the time being. The first reason is the normative belief that these people need humanitarian protection due to the ongoing war. In other words, since the ongoing war has pushed Ukrainians to flee to Europe, a humanitarian reflex has emerged that these people must be protected.

The third reason relates to the expectation that Ukrainian refugees will return to their country with the end of the war. However, it is very difficult to assume that more than 7.5 million Ukrainian refugees will return to their devastated homeland in the near future. Thus, the biggest concern in Europe is that as the war continues, there might be refugee fatigue among the refugee host countries.

Despite the positive perception of Ukrainian refugees by European countries, there is the paradox that those very same countries followed a closed-door policy during the 2015 refuge crisis. It bears repeating that a strict securitization policy was followed against the irregular mass migration of 1.3 million from the Middle East and North African to Europe due to civil wars, conflicts, or poor economic conditions. As a result, most European countries dealt with the issue of irregular migration from a pure security perspective and tried to keep asylum seekers outside their borders.

Today, it is not possible to say that there is a similar reception towards Ukrainian refugees. On the contrary, acting quickly and decisively, European countries have opened their borders in unprecedented solidarity towards Ukrainians. While the EU did not previously implement the Temporary Protection Directive, it decided to implement it immediately upon the start of irregular migration from Ukraine.

Regarding Europe’s double standards on refugees, Bulgarian Prime Minister Kiril Petkov’s following statement is quite noteworthy: “These [Ukrainian refugees] are not the refugees we are used to. As the Austrian chancellor said, these are our relatives, family. These are Europeans, intelligent, educated people, some of them are programmers. We, like everyone else, are ready to welcome them. This is not the usual refugee wave of people with an unclear past. None of the European countries is worried about them.”

Likewise, Greek Minister of Immigration, Notis Mitarachi, who drew the reaction of international organizations for his harsh and cruel practices against refugees, used the word “real refugees” to describe Ukrainians in his speech in the Greek Parliament. Such statements, whose number is way greater, reveal that European countries act on cultural and religious motives while determining their policies on refugees.

What is more, it is widely believed that Ukraine’s historical and political ties with European countries play an important role in this process. In other words, since European countries have stronger ties with Ukraine, a more tolerant attitude has been displayed towards Ukrainians.

However, none of these reasons change the fact that European countries avoided the humanitarian responsibility they should have undertaken in the crisis in 2015 and today are acting in an ambivalent manner. The warm welcome by Europeans to Ukrainians needs to be extended unequivocally to all asylum seekers. 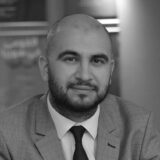 Hacı Mehmet Boyraz is a PhD candidate at Sakarya University in the Department of International Relations and a researcher at SETA Foundation.

Go to Top
Also Read
What Is behind Global Inflation and Where Are We Heading To?