ِAfter the U.K., Denmark is in talks with Rwanda about establishing a new system for transporting asylum seekers to the East African country. 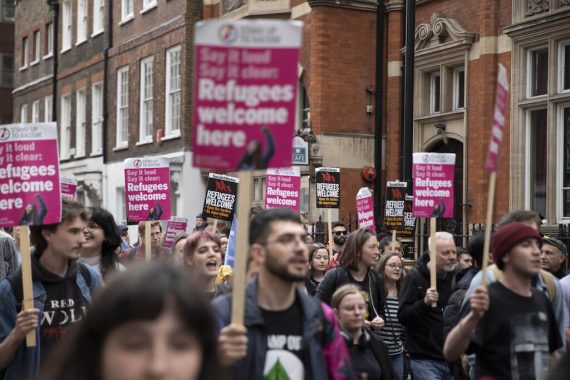 People gather to protest against the UK's plan to send irregular migrants to Rwanda, in the capital, London, United Kingdom on April 14, 2022. Photo by Raşid Necati Aslım, Anadolu Images

People who are seeking refuge in the UK are now to be transported to Rwanda under a contentious new system slammed by international human rights organizations as “shockingly ill-conceived idea” and in violation of international responsibilities.

In a speech on Thursday on April 21, UK Prime Minister Boris Johnson described the initiative as an “innovative approach, driven by our shared humanitarian impulse and made possible by Brexit freedoms” adding that with the UK’s assistance, Rwanda will be able to relocate “tens of thousands of people in the years ahead.”

Priti Patel, UK Home Secretary, said during a joint press conference in Rwanda’s capital Kigali on April 15, that persons transferred to Rwanda “will be given the support including up to five years of training, integration, accommodation, health care, so that they can resettle and thrive.”

Under the new Asylum Partnership Arrangement, people arriving in the UK from January 1, 2022 may be transferred to Rwanda on a one-way ticket to have their asylum application investigated and, if found to be refugees, to be granted refugee status there.

According to the Home Office report published on April 15, it states that “the UK is investing  £120 million into the economic development and growth of Rwanda,” which will cover funding that will assist the delivery of asylum operations, housing, and integration, which will be equivalent to the expenditures paid in the UK for these services.

Along with this measure, the government is marketing it as a tool to discourage migrants from entering the nation across the English Channel, as well as to eliminate human traffickers from the system.

Denmark is in discussions with Rwanda about establishing a new system for transporting asylum seekers to the East African country, after Britain’s announcement a similar plan last week.

Danish Immigration Minister Mattias Tesfaye revealed this week that “our dialogue with the Rwandan government includes a mechanism for the transfer of asylum seekers,” which would make Denmark the first member of the European Union to effectively bypass the EU’s disjointed migration and asylum system if an agreement is reached.

According to the Rwanda Ministry of Foreign Affairs, Danish Immigration Minister Tesfaye and International Development Minister Flemming Møller Mortensen paid an unexpected visit to Rwanda in April 2021, sparking widespread debate that Denmark intended to construct a facility there.

The Rwandan Ministry of Foreign Affairs stated during the meeting between the country’s officials that the agreement will “largely focus on promoting cooperation in political and migration issues.”

Despite previously holding negotiations with a number of African nations including Rwanda, Ethiopia, and Tunisia, the Nordic country has yet to reach an agreement with any of them.

The Scandinavian country, which has shifted to the right, has taken increasingly punitive measures against asylum seekers. It enacted a bill in 2021 allowing migrants in Denmark to be transferred to asylum centers in a partner nation. The concept of delegating responsibility for processing asylum applications to asylum seekers is both arguably negligent and inhumane by intentional law.

Similar models, such as the Australian model or the so-called “hotspots” in the Greek islands, have resulted in major episodes of imprisonment, physical abuse, and a lack of health care.

The Asylum Partnership Agreement proposed by the Home Office in the UK is in violation of asylum law and the Geneva Convention, to which the UK is a signatory. Those who cross the border illegally to seek refuge, according to the Geneva convention should not receive punishment, stated by Article 31.

Human Rights Watch has criticized the disparity between refugees fleeing Ukraine and those fleeing other conflicts outside of Europe. According to the organization, “at a time when the people of the UK have opened their hearts and homes to Ukrainians, the government is choosing to act with cruelty and rip up their obligations to others fleeing war and persecution.”

In a statement, the Danish Refugee Council said that sending asylum seekers overseas for processing is “both irresponsible and lacking in solidarity.” The NGO also questioned the practicality of the plan, saying, “it is also still very unclear how a possible reception center in a third country would be administered.”

Amnesty International UK said in a statement, “Sending people to another country – let alone one with such a dismal human rights record – for asylum ‘processing’ is the very height of irresponsibility and shows how far removed from humanity and reality the Government now is on asylum issues.”