While recently Germany’s economy minister Altmaier visited Egypt this week and met with the putschist president Sisi without problematizing his illegitimate presidency, the German government insisted on new elections in Venezuela. Why don’t democrats doubt the sincerity of German foreign policy under these conditions? The same counts for other leading Western and European powers, which act contrary to “democratic values.” 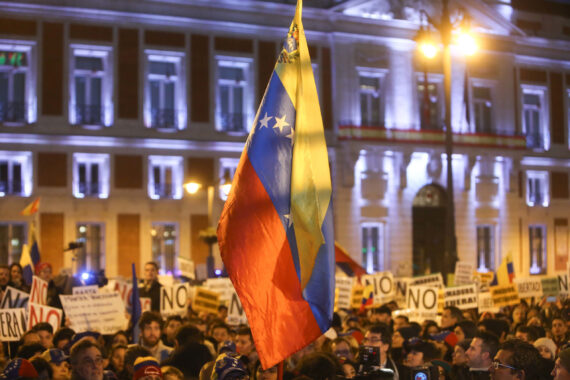 Concentration in Puerta del Sol to support Juan Guiado as president of Venezuela on February 02, 2019 in Madrid, Spain. Getty Images

The situation in Venezuela has become a global issue from its start. Germany, together with some other European states, had set Venezuelan President Nicolas Maduro 8 days to call new elections or that the German government was ready to recognize the opposition’s leader, Juan Guaido, as the interim president. French President Macron, Spanish PM Pedro Sanchez, Dutch Foreign Minister Stef Block, and the UK’s Foreign Minister had made similar statements. Thus, on Thursday, the European Parliament recognized Venezuela’s self-declared interim president Juan Guaido as “the only legitimate interim president” until there were “new free, transparent, and credible presidential elections.”

Well, due to its non-binding character and non-effectiveness in international politics, it’s understandable that the European Parliament initially preferred such a decision, which is most likely based on so-called “moral” motives. This is also why most EU governments, or its foreign ministers, insist on a cautious language despite the decision made by the European Parliament as a collective body. In contrast to the U.S., which has quite other possibilities to military intervention in Venezuela, European states do not have any useful instruments in order to put “effective pressure” on the Maduro administration. Nevertheless, on Monday, subsequent to the end of the so-called 8-days ultimatum and as a reaction to Maduro’s rejection of renewing presidential elections, nearly all EU governments declared that Guaido is the legitimate interim president. German Chancellor Angela Merkel recognized the opposition leader too.

The federal government of Germany and German politicians previously addressed the Venezuelan crisis in Parliament while generally criticizing the Maduro administration. By this, the government openly backed the self-declared interim president Guaido. The social-democratic foreign minister of Germany positioned himself against President Maduro and took the exact same stance as the U.S. by demanding new presidential elections in Venezuela.

The European Parliament’s recognition of Juan Guaido as the interim president in Venezuela is neither binding nor effective in international politics. It’s understandable that such a decision was preferred on so-called “moral” motives.

While keeping in mind that Germany has been the new non-permanent member of the UN Security Council since January, it is with no doubt an unfortunate period for the country to have to face such a crisis. This becomes obvious because the federal government behaves in a totally contrary way, disregarding its very much stressed Western values.

First, it’s not clear why a German government, and in particular its foreign minister, who is a member of a center-left/social-democratic party (SPD), robustly prefers and backs a very sharp position. The main and official arguments the German government provides are 1) “The presidential elections in May 2018 did not meet any democratic standards, they were neither free nor fair”; 2) “Juan Guaidó is the President of the National Assembly, the only democratically legitimate body that represents the Venezuelan people”; 3) “The police and militia are increasingly using repression and deadly force against civilians”; and 4) “More and more people are suffering from disease, malnutrition and poverty”.

The arguments surrounding the controversy of the recent presidential elections in Venezuela cannot be undermined. However, the problem here is the stance that Germany and other European countries have against other undemocratic regimes. It is no secret that Germany, and generally powerful European countries, have no problem with regimes such as Saudi Arabia, Egypt, and other similar autocracies. Yet they still demand new elections to take place in Venezuela just so their preferred candidate can get elected. Unfortunately, this is not a sincere position that neither theories of democracy nor any reasonable democrats would accept.

It’s no secret that Germany and other powerful European states have no problem with regimes such as Saudi Arabia, Egypt, and other similar autocracies. Yet they still demand new elections to take place in Venezuela just to see their preferred candidate get elected.

Elaborating the crisis from a realpolitik perspective does perhaps fit the aggressive tradition of countries such as the U.S., France, or the U.K. However, it seems that Germany overrates its current position in the UN Security Council. Furthermore, the question Germany should focus on is a legal one. In this sense questions arise like, does democracy allow such an intervention in the form of demanding new presidential elections when the recent elections in Venezuela had just been held 6 months ago?

The second and related strangeness concerns the German government’s effort to put itself on the same level as the U.S. administration, which is actually being harshly criticized by the German public, due to Trump’s position on many issues. What changed in such little time for German foreign policy to transform itself into a strange and ambitious position, which favors hegemonic methods? What’s on stake and how do German democrats justify this policy? In the German parliament, only socialist Left Party members criticized Germany’s current stance in the Venezuelan case. By this, it is also not surprising that the left-biased “Green Party” also chose the U.S. side.

European countries need to ask themselves: Does democracy allow such an intervention in the form of demanding new presidential elections when the recent elections in Venezuela had just been held 6 months ago?

In the context of recent “ambitious” but rather aggressive foreign policy goals of in particular Germany, one might remember some similar biases in recent years, which ultimately resulted in failure. For instance, when Germany engaged itself in the Ukraine issue, neither had Germany any subsequent means to reinforce the country’s position, nor could it prevent the situation from getting worse. However, what happened when Russia militarily intervened in Ukraine and even annexed the Crimean Peninsula? Nothing. German policymakers were not able to do anything most likely due to the miscalculations of trusting the Obama administration and similar non-realistic options.

The crisis in Venezuela is not perceived as an issue that can be evaluated free from double standards. European countries, and in particular Germany, rightly criticize the Venezuelan socialist President. However, to announce him as illegitimate seems not to be based on a sincere stance. While Germany’s economy minister Altmaier visited Egypt this week and met with the putschist president Sisi without problematizing his illegitimate presidency, the German government insisted on new elections in Venezuela. Why don’t democrats doubt the sincerity of German foreign policy under these conditions? The same counts for other leading Western and European powers, which act contrary to “democratic values.” Nevertheless, at the end of the day, people will remember democratic stances and recently executed ambiguous efforts doomed to fail in the long-run.