Is Germany Intervening in the Internal Affairs of Venezuela?

The report published by Wissenschaftlicher Dienst des Bundestages stresses the fact that the German parliament's decision to recognize Guaidó as the interim president could cause a situation that could be seen as an interference in Venezuela's internal affairs. 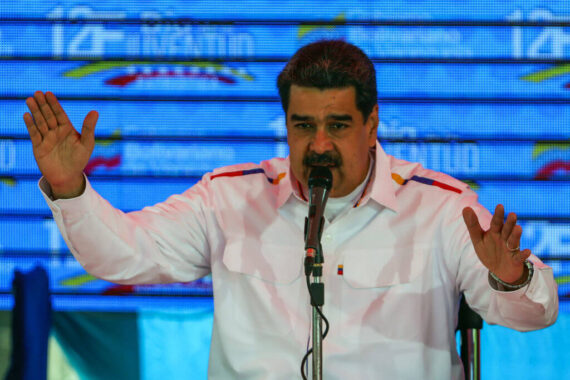 Venezuela's President Nicolas Maduro gestures while delivering a speech in the framework of the 'Youth Day' celebrations at the Bolivar Square in Caracas, Venezuela on February 12, 2019. Getty Images

Last week I tried to address the general perception of European states and in particular Germany’s stance with regards to the Venezuelan crisis. I concluded that it was an unfortunate step based on double standards by leading European countries to recognize the self-proclaimed interim president Juan Guaidó as the legitimate head of state. According to Germany and other European countries, Guaidó should allegedly lead the country until the next – this time, ‘democratic’ – presidential elections.

In a similar sense, the Bundestag’s, scientific service (Wissenschaftlicher Dienst des Bundestages) recently published a 7 page-long report, which similarly stressed the problematic point of the German government’s “early” decision from a point of international law. The scientists of this specific institution do not represent positions of parliament or MPs, but generally support the MP’s works by providing explicit and factual information, which relate to current topics and issues of fundamental concern. By this, a recent report was published due to a recent request of a Left Party MP who opposed the federal government’s pro-Guaidó position.

The report stresses the fact that the German parliament’s decision to recognize Guaidó as the interim president could cause a situation that can be seen as an interference in Venezuela’s internal affairs. The report refers to international law and quotes that “real prerequisites” for an early recognition of a person such as Guaidó “could not be established with the available means.” Moreover, the report states that for the parliament’s decision to be in accordance with international law, the new president has to achieve entire power completely. However, regarding Guaidó, this has not been the case yet. The report ultimately concludes that just recognizing a person as the leader of a state does not provide legality.

A report published by Wissenschaftlicher Dienst des Bundestages stresses the fact that the German parliament’s decision to recognize Guaidó as the interim president creates a situation in which Venezuela’s internal affairs are violated by Germany.

As one notices, the scientific report published by an institution affiliated to Germany’s main legislative body, the parliament, indirectly implies that the decision to recognize a self-proclaimed person as an interim president is based solely on “political reasons.” As a consequence, rational voices – in addition to left-wing circles that are ideologically positioned in favor of Maduro – recommend that Germany should act as a mediator instead of preferring sharp positions. Otherwise, the one-sided support and partisanship could end in intensifying an even problematic conflict.

As I addressed last week, Germany has aimed for a new orientation in is traditionally-followed foreign policy. By this of course, Germans do not dare to switch from one day to the other with a completely new perspective. However, with the election of Donald Trump as the U.S. President, German foreign policy has also began to challenge its traditional U.S.-leaning position, while elaborating a rather active orientation.

In this sense, the country’s current non-permanent membership in the UNSC for 2019-2020 might deliver a “chance” to show its “potential” in world politics. This is also one of the reasons why Germany is acting very actively, for instance, in the Venezuelan conflict. Germany disregards and miscalculates its actual position by comparing itself with other allied countries such as France, the U.K., or U.S., which still remain military giants in comparison to Germany.

Germany miscalculates its actual position by comparing herself with  France, the U.K., or U.S., which are still military giants in comparison to Germany.

By referring to its huge economic power, Germany does not rationally take into account that a government change in Venezuela – regardless of Germany’s and the EU decision’s legality or not – would be able by political means. The point that I want to stress here is that countries such as the U.S. even take, or might take, military intervention into account in order to overthrow an incumbent government. The German political tradition, on the other hand, though, does not have such an option – the political and societal costs of this rather unlikely ambition would be very high in the eyes of the German electorate.

Thus, the questions arises as to what Germany should and can do in such a situation. For this, one might, for instance, focus on Turkey’s diversified foreign policy ambitions and try to understand such a position. With this, the German government will be able to notice the following points: Turkey supports constitutional requirements in Venezuela while Germany and other Western countries are calling for a change in government, adopting obvious double standards and disregarding legal requirements – as the German parliament’s scientists have stressed. And due to Turkey’s correct position, it seems that even the opposition leader Guaidó, who is backed by nearly all leading Western countries, had to accept Turkey’s stance in prioritizing the will of all Venezuelan people.