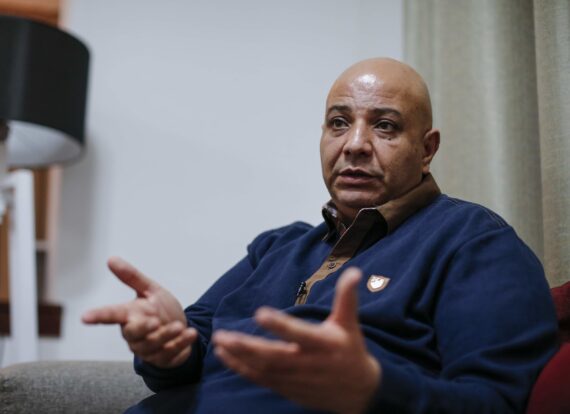 Talal Silo, a former spokesperson and defector from the Syrian SDF, a group dominated by the terrorist PKK/PYD, speaks during an exclusive interview in Ankara, Turkey on December 1, 2017. Silo told details of the U.S. arming terrorist groups in the region and what some U.S. officials thought about the PKK/PYD's presence in northern Syria. Anadolu Agency

A simplistic view of the Syria war from distance would explain that the war is all about overthrowing the evil called Daesh from the worn torn country. Every contending power – the US, Russia, Saudi Arabia and Iran – including their regional allies have the same claim. But under the barrage of daily media reports, which advance the same view as that of the contending powers, the inside story is ever more intricate to an extent incomprehensible to the distant gaze.

The most remarkable has been the role of the US in the war. The US particularly ventured into the war to eliminate the terrorist organization Daesh, and seldom did it acknowledge that its objectives were determined by the presence of its global rival, Russia, and the regional felon, Iran.

Recent revelations by the former spokesperson of Syrian Democratic Forces (SDF), Talal Silo, who last month defected from the amalgam, will have consequences beyond Syria and most importantly Turkey. In an exclusive interview with the Anadolu Agency on Friday, the former high-ranking commander of SDF, Silo gives a detailed account of the Syrian war that helps us to see what is happening behind the scene.

Someone trying to draw the mental picture of the Syrian war must, first of all, dismiss Daesh as a mere media object that covers up the superpower proxy. That is to say, one must directly and simply focus on role the US is playing in the war to counter its rival’s increasing regional influence.

The real motive behind the US intervention in Syria never was to fight Daesh. Rather the US intends to secure its interests, that too by aligning with the SDF, much against the wishes and security of the regional ally, Turkey.

SDF is an amalgam of different ethnic and religious groups but dominated by PKK supporters. The armed group receives its weaponry, vehicles and military support from the US to apparently fight Daesh in different regions of Syria – most recent Raqqa and oil-rich Deir Al-Zor provinces – where the US wants to be ahead of Russian backed groups.

According to Silo’s revelations, the US along under the name of its allies SDF and YPG targeted to reach Bukamal and Mayadin districts before the rapidly advancing Syrian regime forces.

More interesting part of the war is the oil trade by the PKK which it sold over Daesh areas and also to the regime through an officer of the regime, al-Katirji, who is the general responsible for taking oil from the PKK. Moreover, the money transactions in oil trade was carried out through banks from Lebanon and Europe through accounts belonging to PKK members.

He even revealed that an American intelligence officer wanted them to advance towards Deir Al-Zor and that the US will give the “necessary support to provide a post towards the sea to the SDF and the Syrian Democratic Parliament.” The logic the intelligence officer gave that SDF and PKK wing YPG can only maintain a viable structure only if they have an “access to the sea” – (called Mediterranean corridor).

By giving an example of Kurdistan and Erbil, which do not have any access point to the sea, hence always needs to convince the other parties to export oil, the US promised the “Mediterranean corridor” but failure in the Deir Al-Zor operation dashed the hopes.

On the question of the US protecting weapon depositories for the YPG, Talal Silo’s revelations go in line with Turkish claims. It was Americans not only providing weapons to YPG but also protecting them by keeping them in their own bases which Turkey could not target.

If it were the US supporting the SDF and YPG in Deir Al-Zor, in Afrin the story was different. When the US denied to support them in Afrin they approached the Syrian regime through Assad’s cousin, Hussein Assad.

“He told me to establish a line between the SDF and the Russians positioned at Khmeimim base,” said Talal Silo.

More than the outcome of these proxy dealings among Americans, Russians, the Syrian regime and Iran, the mere act of these dealings is significant. They tell multiple stories: that the world powers only act for their own interests – to distribute the ruins of Syrian war at the cost of Syrian peoples’ lives. Second, by collaborating with the SDF and YPG, Turkish security concerns were thrown into disguise. Despite the long insistence of Turkey that the armed groups are closely allied to the PKK terrorist organization, which is involved in a decades-long war against Turkish state, all the sides involved in the Syrian war have been providing support to these groups to exploit them for their own interests.