Elections will only deepen the divide among the Palestinians and falsely proclaim before the world that Palestinians have a state and can hold free and fair elections. 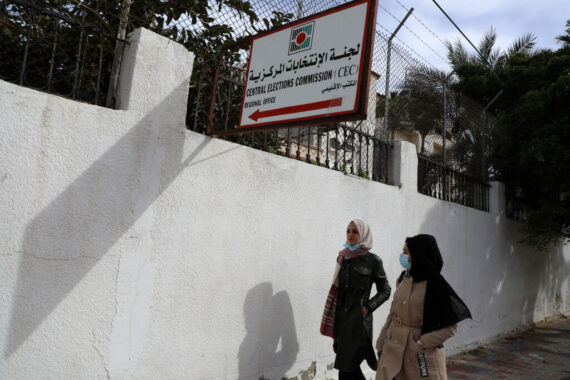 Palestinians walk past the offices of the Central Elections Commission in Gaza City, on January 17, 2021. Photo by Majdi Fathi, NurPhoto via Getty Images

In what seemed a surprising move, the Palestinian Authority (PA) president Mahmoud Abbas issued a decree on January 15, announcing that general elections will take place in Palestine this year. The elections, which are the first of their kind in 15 years, will be held on three phases: Palestinian Legislative Elections (PLC) on May 22, 2021; presidential elections on July 31, 2021; and Palestinian National Council (PNC) elections on August 31, 2021.

The move was welcomed by Hamas, Abbas’s main rival. It was a surprise for many Palestinians who have witnessed Palestinian reconciliation talks taking place over the last 14 years in several capitals, including most recently in Istanbul and Cairo, with no tangible results.

The election decree by the PA president raised many questions in terms of its timing and practicality. Is it possible to hold elections in a Palestine under occupation, including Jerusalem, without ending the Palestinian national rift? The answer is “yes” according to the decree, but this plan will likely face many challenges on the ground.

Will Israel Allow Elections in Jerusalem?

Israel, which won a long-awaited U.S. recognition of its sovereignty over Jerusalem, will most likely decline the PA’s request to hold the election there. Israel approved the Palestinian elections in Jerusalem in 2006 under U.S. pressure, which will not be the case this time. In 2006, the U.S. plan was to include Hamas in the political process in an attempt to tame it, which proved unsuccessful – to the contrary, Hamas has grown more stubborn over the years.

The Palestinian elections this year, unlike 2006, will be held according to the list proportional representation system, where voters will choose whole lists of political parties rather than individual candidates in specific electoral districts.

In 2006, the voting system was 50% candidate-based and 50% proportional representation. The reason why both Hamas and Fatah agreed to this system is because it reinforces partisan politics, where the electorate votes for a specific political party, rather than candidates, who might be independent or from the other party.

There have been speculations that both parties, Hamas and Fatah, might run for the election in a single united list. Although it sounds ironic, considering the division and the history of hostility between the two parties, this reveals how they view this election: it is all about managing the division rather than ending it.

Another challenge to these Palestinian elections is how both parties, and other smaller parties, will ensure that the losing party accepts the results of the election. In fact, there is no guarantee that the elections will not be forged considering the environment of security repression which has resulted from 15 years of rift politics where security forces have always had the final say and the upper hand in domestic politics.

The proportional representation system also aims to crush smaller political parties and groups that will not be able to get enough votes to pass the election threshold easily. This translates into reproducing the division and reinforcing Hamas and Fatah as the only political parties in charge of Palestinian politics.

Read: A Deal to End All Deals? Trump’s Deal of the Century May Annihilate Palestine

Other smaller political parties, both from the left and right, along with many Palestinians, especially the younger generation, will choose not to vote. Today, many Palestinians no longer believe that their votes in an election under occupation and without solving the political split will matter.

What is the value of an election under occupation? Elections are meant to choose representatives of a system that is supposed to have sovereignty over a territory.

They know too well that their votes will not improve their living conditions and that major political parties have long decided to adapt to division rather than solve it.

In the first place, what is the value of an election under occupation? Elections are meant to choose representatives of a system that is supposed to have sovereignty over a territory. Palestinians don’t have any sovereignty over their land and resources, and without an Israeli permit, the head of the Palestinian Authority can’t move in and out of the West Bank.

In other words, Palestinians need to focus on liberation and independence rather than having a pseudo-state under occupation that only serves as an excuse for Israel, the occupying power according to international law, to abandon its responsibilities towards the Palestinians. The titles of presidents and members of parliament in the Palestinian context do not count, nor do they make any sense under occupation.

The Abbas decree noted that the Palestinian National Council (PNC) elections, which matter the most, will be held “where possible.” This vaguely worded statement means that the PNC elections, which are supposed to include Palestinians of the diaspora, could be held in a limited number of countries, depending on whether the host countries will allow the elections or not.

What Palestinians Need to Do

In fact, calling for equal votes with Jewish-Israelis under the system Israel established between the Mediterranean Sea and the Jordan River would be more pragmatic for the Palestinians than holding elections most probably without Jerusalem and some areas of the West Bank.

This is especially true in light of the current reality of military occupation, which Israeli human rights group B’Tselem described recently as apartheid (whisper: Palestinians have been saying this for a long time). In other words, Palestinians need to address the roots of their reality today, rather than looking for elections that will only serve to reinforce division and give the false impression that they have a sort of statehood and sovereignty under occupation.

The Palestinian elections might take place as planned in May 2021, but a large number of Palestinians will boycott them and a larger number will not be represented in them. Elections that do not include Jerusalem and much of the Palestinian diaspora sound more like municipal elections of self-autonomy under occupation.