Gantz, Netanyahu, Bennett and Israeli Politics in a Stalemate

Israelis live in the illusion that another hero will show up, another general with the dust of a recent war still in his hair, and who will see the folly of war and the wisdom of making peace. 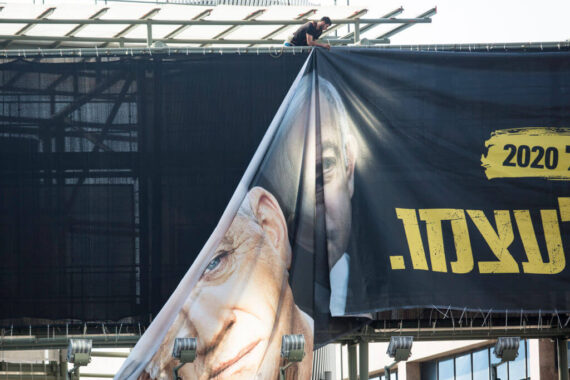 The upcoming Israeli elections – the fourth in two years – bring little promise of change. These elections bring to mind the famous saying that trying to do something over and over again while expecting different results is a sign of madness. Anyone who expects that the existing Zionist political spectrum will give rise to a progressive or even a slightly liberal coalition lives in a fantasy world. Even Israelis realize that the possibility of change does not exist. The only purpose for calling for elections at this point is to allow Benyamin Netanyahu to remain in office.

Now, Netanyahu got what he wanted and General Gantz has shown himself to be spineless and pitiful – not surprising for a general who made a career out of the indiscriminate killing and oppression of the Palestinian people. As things stand today, even the most optimistic Israelis realize that the upcoming elections are a colossal waste of time and money.

Read: Israel Elections: Why targeting Turkey is an Electoral Strategy for Likud?

The difference between the right and the so-called Zionist left is that the former does not hide its intentions and cares little for what the world might think or say. The latter is a little embarrassed by its own racism and violence and, therefore, pretends that it cares for the rights of Palestinians and that it really wants to achieve peace one day.

However, as we have seen, even the most liberal Zionist will never concede on the issue of land and will always blame the Palestinians for any failure to reach an agreement.

The most liberal Zionist will never concede on the issue of land and will always blame the Palestinians for any failure to reach an agreement.

There are several reasons why Netanyahu has been able to hold on to power for so long. He has a remarkable ability to negotiate, he makes promises and then breaks them, and his intimate knowledge of the political players and the political process in Israel gives him a unique advantage. He is without any doubt the best horse trader in the business and his complete lack of scruples helps him get what he wants every time.

Netanyahu is able to get what he wants regardless of who sits in his coalition and even though he is a right-wing militant fanatic, after the last elections, he opted to create a coalition with what is considered by Zionist standards a center-left political block.

He was able to do this because he knows full well that what is called the “Right Block,” which is made up of mostly religious right-wing militants, will always stand by him, and so he was covered from both the right and the left.

Leader of the Blue and White political alliance, former chief of staff of the Israeli army, Benny Gantz speaks to his supporters during the final stage of his election campaign in Tel Aviv, Israel, 15 September 2019. Photo by Faiz Abu Rmeleh, Anadolu Images

Even though the right-wing militant settlers criticize Netanyahu from time to time, they know very well that they need him in order to fulfill their own political agenda.

Israelis laugh at their own tendency to seek some new retired general in shining armor that will be their political savior every time elections are called. Many Israelis are still caught up with the admiration of the late prime minister Yitzhak Rabin who was a glorified war criminal and eventually signed the Oslo (so-called) Peace Accords.

Israelis live in the illusion that another such hero will show up, another general with the dust of a recent war – in which he was victorious – still in his hair, and who will see the folly of war and the wisdom of making peace.

However, the myth of the late prime minister Rabin as a warrior-turned-peacemaker has become old. Rabin was no warrior; he was a war criminal and he was no peacemaker. He did everything he could to make sure that Palestinians would never see their right to self-determination materialize. Equally, there will never be any Israeli general who will fulfill that fantasy.

Will there be a new general that will come and take over, sweeping through the Israeli political swamp and saving Israel from itself? The answer is no. There is, however, an alternative to Netanyahu that has recently presented itself. This alternative comes from the right-wing religious militant block and his name is Naftali Bennett.

According to a piece in the Israeli daily Haaretz, comparing Bennett to Netanyahu, “They both get their inspiration from the right-wing in the United States and in Israel, the Bible and Ayn Rand, and believe that the strong are right. But as a kippa-wearer and an entrepreneur who made a profitable exit, Bennett beats his rival hands down. Netanyahu might know how to quote the Bible and Ayn Rand, but Bennett fulfills them with his actions and his way of life.”

More and more opinion-makers in Israel agree that, as this article states, “Bennett is undoubtedly the most impressive Israeli politician who has emerged over the past decade.” Compared with Prime Minister Netanyahu, whose corruption has led him to indictment, Bennett is seen as a clean, honest, and caring politician, who pays his way.

Naftali Bennett is currently the chairman of HaYamin HeHadash, or the “New Right” party, and in the latest opinion polls he is predicted to win 22 of the 120 Knesset seats. If these predictions are true, it would be a huge political victory but still not enough to unseat Netanyahu. In the past, Bennett has served under Netanyahu as minister of education and later as minister of defense.

However, he has endeared himself to the Israeli public in his self-appointed role as the man in charge of leading the fight against COVID-19, a role to which Netanyahu has refused to nominate him officially. He is seen today as the leading candidate in the race for prime minister, which is unprecedented for a politician who represents not just the radical right but the religious Zionist right.

Read: The Search for a Political Consensus in Israel: Pre-Election Scenarios

Bennet is one of several politicians that come from the radical militant religious right in Israel who has the face and voice of a reasonable, pragmatic politician. As one listens to him speak, one could easily forget that he represents a political ideology that is even more hate-filled and violent than anything we have seen before coming out of Israel. It is an ideology that not only denies Palestinians have rights to Palestine, but believes that Palestinians should only have the right to remain in Palestine under conditions that are dictated by a radical Zionist-religious ideology.

In other words, Palestinians must peacefully accept the destruction of their country, the elimination of their identity, and live as residents with no rights as the “Arabs of Israel”. It is also an ideology, if one can call it that, which believes that a Jewish temple should replace the Dome of the Rock and the Al-Aqsa Mosque which have been iconic symbols of Jerusalem and indeed of Palestine for close to 1,500 years.

Naftali Bennet and his followers believe that Israel comes first, and that Jews have rights that supersede those of anyone else residing in historic Palestine. In fact, they completely deny that any history exists that could identify Palestine as a country or Palestinians as a people. By this, Bennet and his followers deny a glorious history that, according to a book recently published by the historian Nur Maslha goes back close to 4,000 years – actual history, not the biblical Zionist mythology.

If one was to try and predict the result of Israel’s next election scheduled for March 2021, one could safely say that whatever changes may occur, they will be small and insignificant. Prime Minister Netanyahu with a service of over a decade under his belt still seems to be the favorite and is very likely to remain in his seat for the foreseeable future.